A Bad Week for Corporate Spies

Picking on the Pickers

The Florida-based Coalition of Immokalee Workers (CIW) advocates for better working conditions and fairer pay for the state's low-wage farmworkers. The plight of many tomato pickers is so dire that it's attracted the attention of the U.S. Senate Committee on Health, Education, Labor, and Pensions, which invited CIW's co-founder to testify at a hearing this week.

CIW has won two high-profile campaigns, convincing Taco Bell and McDonald's to pay tomato pickers one penny more per pound. These victories did not come easily. McDonald's resisted by joining the less-than-independent "Socially Accountable Farm Employer" program and pressuring a labor researcher to release a preliminary, error-filled report on tomato picker wages, as the Center for Media and Democracy reported previously. 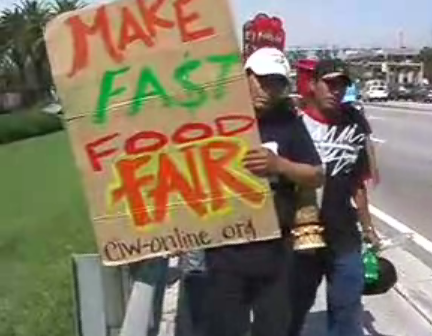 CIW is now petitioning Burger King to give the same penny-a-pound raise. The fast feeder refused, and CIW began being "vilified online and in e-mails that can be traced to the Miami headquarters of Burger King," reports the Fort Myers News-Press. The emails and comments were posted under the names "activist2008" and "stopcorporategreed."

Then a college student started taking a strange interest in CIW conference calls. Cara Shaffer contacted a student group allied with CIW and said she wanted to start a farmworker alliance group on her campus. But Shaffer isn't the student she claimed to be. She heads Diplomatic Tactical Services, a Florida-based security firm that offers such "labor relations" services as "covert surveillance" and "undercover operations."

Shaffer has refused to explain her involvement with CIW. A Burger King spokesperson "says he knows nothing about any Burger King effort to spy on the Immokalee groups," reports the News-Press. The not-so-slick spokesperson added, "I have no idea what should be secret about helping farmworkers."

"After last year's Camp for Climate Action, new activists began turning up to London Plane Stupid meetings," recounts the group's website. "Most were perfectly normal people angry at the expansion of Heathrow airport. But one newbie didn't fit in with the rest -- Ken Tobias."

To test their suspicions, the group gave Tobias false information. When the aviation industry responded and newspapers reported on "the ludicrous idea of a Climate Camp in Hyde Park," Plane Stupid knew they were being spied on. Soon after, they were able to identify "Ken Tobias" as Toby Kendall, an employee of the "risk management" firm C2i International.

C2i's website "puts 'aerospace' at the top of a list of industries for which it works," notes the London Times. Heathrow's owner, BAA, said it "had no contact with the named individuals but was subject to an unsolicited pitch by C2i. We rejected their invitation to enter into an arrangement with them."

BBI's insider information greatly helped the Ketchum, Nichols-Dezenhall, and Mongoven, Biscoe & Duchin firms defend their environmentally-challenged clients. In a September 2000 email, one BBI employee wrote, "Received a call from Ketchum yesterday afternoon. ... It seems Taco Bell turned out some product made from bioengineered corn. The chemicals used on the corn have not been approved for human consumption."

On behalf of Kraft, Ketchum asked BBI for "pre release information" about environmental groups' response to the "glow-in-the-dark taco" news. BBI immediately began planning to go through the trash of three activist groups fingered by Ketchum: the Center for Food Safety, Friends of the Earth and GE Food Alert. BBI had previously provided Ketchum with information about a private strategy session involving 35 environmental groups, as well as reports on "tightly held" plans for future Greenpeace campaigns.

BBI frequently used dumpster-diving to collect information -- at least once against progressive PR firm Fenton Communcations, which counts environmental groups among its clients. In December 1999, a BBI employee staked out David Fenton's home, noting "the time of the morning garbage pick-up and that he returned to the office to 'sort material' and 'analyze,'" according to Mother Jones.

While BBI (later called S2i) no longer exists, its principals currently work for at least three other security firms: Chesapeake Strategies, the Annapolis Group and Global Security Services. And corporate espionage continues, as the Plane Stupid and CIW incidents show.

"Inside information gives companies a strategic advantage," wrote Amsterdam-based investigative reporter Eveline Lubbers in the 2002 book "Battling Big Business." Lubbers helped uncover an eight year-long scam by a Dutch security firm, where one of its employees posed as an activist. He collected discarded paperwork from at least 30 different activist groups, saying he would sell it to recycling plants and give the proceeds to charity. Instead, the documents were carefully reviewed and often used against the groups.

Lubbers has seen corporate spying not only undermine activist campaigns, but also destroy groups. Even "non-confidential documents can reveal plenty about a group's activities when combined with other data," she warned. "Stolen files can give insight into an organization's goals and its chances of success, information about its financial position, the size of its following or the strength of its alliances."

She suggests that activist groups take precautions, like locking file cabinets and changing computer passwords. It would also help if companies were held accountable for undermining civil society -- perhaps by having some of their own confidential information made public.

https://www.prwatch.org/node/7262 The disparaging anonymous email in Florida came from a Burger King VP....
I share the same information you agree that this way I think is a very accurate.. By <a href="http://www.istanbulmark.com" title="web tasarım, web tasarımı">web tasarım</a> By <a href="http://www.dantelorneklerim.net" title="dantel örnekleri, dantel modelleri">dantel örnekleri</a>