An Ethical Look at Fake News 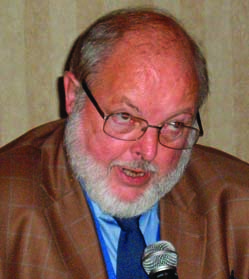 "I love Red Cross, but I don't trust them completely when they're the ones shooting the video," explained journalism professor and Society of Professional Journalists (SPJ) ethics committee member Jerry Dunklee.

Dunklee was speaking at SPJ's recent convention, on a panel titled "Paid and Played: The Ethics of Using Video News Releases." His remarks focused on the ethical issues raised by VNRs. Center for Media and Democracy (CMD) executive director John Stauber and Jim Bayse of the firm Wiley Rein, which represents the Radio-Television News Directors Association, were also on the panel.

Much of the VNR debate is currently focused on legal and policy issues: speculation over what the Federal Communications Commission really meant by fining Comcast for five undisclosed VNRs, and what the agency is likely to do next. But it's also important to address the ethical implications of VNRs. Dunklee did so by relating sometimes abstract guidelines to real-world situations he faced as a reporter and news director in cable and broadcast television.

Dunklee opened by stressing that all promotional materials -- including VNRs, audio news releases and print press releases -- are biased. "Press releases don't dwell on controversies and never explain the other sides of an issue," he stated. "They are not interested in other points of view."

Presenting promotional material as "news" has two effects: it undermines news quality, while enhancing the impact of the PR message. "Ask any public relations professional and they will tell you they want their story in television, radio and print news ... because it is more credible. Period. If we [journalists] do a story about it, the public is much more likely to believe it."

According to Dunklee, if VNRs are aired in newscasts without proper disclosure, "the average viewer does not have a way of understanding whether this is fake, phony, or real." News viewers, he said, "are sophisticated and unsophisticated at the same time. They understand a lot about when they're being manipulated. But if you see a video news release -- a piece that looks like every other network or syndicated package -- on your local television station and it's introduced by your trusted local anchors, you're going to believe that that information is from a legitimate -- read, 'independent' -- news operation that's done its fact checking and has balanced its piece."

Still from a recent Capital One VNRWhile much of his critique applies to all promotional materials, Dunklee singled out VNRs as presenting a unique threat to news integrity. "VNRs permit the client to control content to a remarkable degree," he warned. "They're pictures, they're sound, they're scripts. And, perhaps most importantly, they deny access of legitimate reporters to the various kinds of news sites that are important for us to gain access to, in order to do our job properly."

Dunklee elaborated on the importance of journalistic access, sharing an anecdote from his own TV reporting days. A Connecticut plant owned by Upjohn Corporation was "alleged to be breaking the environmental laws and breaking OSHA [job safety] laws. We had all sorts of leaks ... about OSHA violations and violations of pollution rules, putting effluent into the local river and groundwater. We could not prove -- quote, close quote -- this story on site, because we could not gain access. They did give us lovely press releases, telling us about how beautiful they were. Those, of course, turned out to be lies."

The SPJ ethics code directs reporters to "seek truth and report it," Dunklee noted. "The code says good journalists should distinguish news from advertising and shun hybrids between the two, that blur the lines between the two. We should deny favored treatment to advertisers and special interests, and resist their pressure to influence news coverage." He paused and observed, "It's pretty clear that VNRs violate all of those."

In closing, Dunklee said that "the ethical vision" is that "all [VNRs] should be labeled." He added that "yes, you have a right to" use VNRs freely. "But it should be labeled throughout the running of the piece, as to source and payment. That is, who paid for the production of this video news release."

Continuous, on-screen VNR labeling has also been advocated by CMD, Free Press, the Writers Guild of America, East, and even TV Guide, which in a 1992 editorial suggested that "when a TV news organization includes film or tape prepared by an outside source in a broadcast, the label 'VIDEO SUPPLIED BY [COMPANY OR GROUP NAME]' should be visible for as long as the material is on screen."

<blockquote>Fifteen years later, television news may finally start cleaning up its act.</blockquote> Here's hoping, but "television news" isn't exactly a monolithic entity. It's fine that professional and advocacy groups are pushing for better ethical practices, but that leaves out media ownership and Wall Street, whose bottom line imperatives are the chief source of the problem. It's now pushing half a century since Newton Minnow, JFK's FCC chairman, famously called TV a "vast wasteland" and pledged to clean it up. From the half-empty perspective it seems like that half-century has shrunk the America's hopes for better TV by quite a bit. Minnow was talking about better TV in general while we here are just talking just about saving TV news.
I have posted some of Mr. Dunklee's key points to remind many who would share information (and especially in our major media) what they should think through before commiting to air what they have been sent, no matter how attractive and/or innocuous. Junkk.com - not all that's green can be viewed in black or white