"It's ironic that ABA would choose to make this announcement at the National Conference of State Legislatures meeting, since its members lobby against any state bills to get sodas out of schools," said Michele Simon, director of the Center for Informed Food Choices. According to a release authored by Simon and Susan Linn, a member of Campaign for a Commercial-Free Childhood, in the past year, soft drink lobbyists successfully killed or watered down bills restricting soft drink sales in schools in Connecticut, Arizona, Kentucky and New Mexico.

At the state and local level, ABA's new policy may actually weaken grassroots efforts to control beverage sales in schools. "Where school beverage contracts already exist, the policy would be implemented when the contract expires or earlier if both parties agree," ABA states in its news release. The Seattle Post-Intelligencer reported that ABA was promoting its new policy in Seattle, where all "conventional" soda vending machines had been removed last year from school grounds. According to Seattle Public School spokesman Patti Spencer, high-sugar content drinks are prohibited, but schools can still offer fruit drinks or beverages with no more than 15 grams of added sugar.

Under ABA's policy, the beverage industry would provide the following:

ABA's policy, however, is voluntary with no enforcement or oversight mechanism. What impact beyond good press for the ABA it will generate is questionable. "If the ABA and its members were serious about addressing childhood obesity, they'd pledge to immediately stop undermining the effort of local nutrition advocates," Simon and Linn wrote.

ABA's school vending policy is reminiscent of other PR efforts by corporate food producers, such as Coke's distribution of pedometers to students or McDonald's partnering with Oprah Winfrey's personal trainer Bob Greene. While publicly voicing concerns about rising obesity rates and creating diet-conscious photo-ops, the food industry has lobbyists working behind the scenes to oppose any effort by lawmakers to slim-down junk food. "Last year, during the reauthorization of the children's nutrition programs, Republican Senator Peter Fitzgerald of Illinois attempted to insulate the government's nutrition guidelines from the intense industry pressure that has warped the process to date," Gary Ruskin and Juliet Schor wrote in The Nation. Fitzgerald proposed an amendment to move the guidelines under the purview of the Institute of Medicine, a more independent body. In response, the food industry went to the White House "to get it to exert pressure on Fitzgerald."

"One irony of this fight was that the key industry lobbying came from the American Dietetic Association, described by one Congressional staffer as a 'front for the food groups,'" Ruskin and Schor noted. Fitzgerald left Congress without getting his amendment. "By that time the industry's lobbying effort had borne fruit, or perhaps more accurately, unhealthy alternatives to fruit. The new federal guidelines no longer contain a recommendation for sugar intake, although they do tell people to eat foods with few added sugars," Ruskin and Schor wrote. 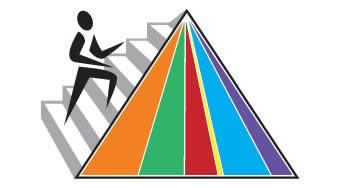 Earlier this year, the U.S. Department of Agriculture introduced a redesigned food pyramid, part of a $2.5 million project to update the icon based on the 2005 Dietary Guidelines for Americans. The revamped food guide pyramid was created by global PR firm Porter Novelli, a firm that has counted several major food companies as clients and was responsible for the creation of the earlier food pyramid. The campaign also features an interactive website, MyPyramid.gov.

In addition to not setting limits on sugar consumption, the redesigned pyramid has drawn criticism for shifting the focus away from food choices. One version of the food pyramid graphic actually shows no food, only a person climbing stairs. According to critics, this reflects USDA's acceptance of an industry wide strategy to emphasize exercise as the solution to obesity. PR trade publication O'Dwyer's reported in June that USDA and Porter Novelli had become "Sphinx-like" when it came to answering questions and criticisms about the new icon.