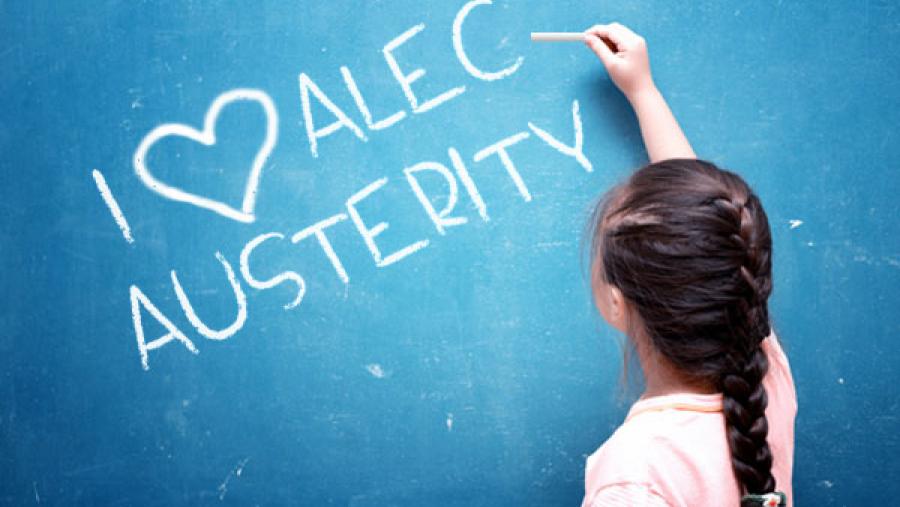 -- By Jonas Persson and Mary Bottari

The right-wing push to amend the U.S. Constitution by requiring a balanced federal budget is gaining momentum. In January, GOP Governor John Kasich of Ohio went on a six-state tour to rally support, and so far this year, New Jersey, Utah and North Dakota have passed resolutions calling for a Constitutional Convention to propose a balanced budget amendment. By some counts, 27 states have passed such resolutions; 34 are needed to trigger a convention.

Ronald Reagan called for a balanced budget amendment in the 1980s and Newt Gingrich included it in the 1994 Contract With America. A year later, ALEC joined the fray with a model resolution for states. Those who advocate for an amendment often cite “common sense” concerns about “fiscal responsibility.” But as history shows, the rhetoric often masks the outright hostility many proponents of the amendment have for key federal programs like Social Security, Medicare and Medicaid, and for the regulatory infrastructure that protects consumers and the environment.

Prominent economists also warn that such an amendment could have catastrophic results during economic downturns and is exactly the wrong prescription for today's sluggish economy.

"A balanced budget amendment would force the government to reduce demand in the economy and eliminate jobs by cutting spending and/or raising taxes any time the economy slowed," Dean Baker, co-director of the Center for Economic & Policy Research, told CMD, adding that "in an economy that desperately needs more demand to boost growth and employment, the promoters of a balanced budget amendment are working hard to push in the other direction."

ALEC has indeed been working hard, and now the corporate bill mill has opened up a new front in the decades-long battle for a constitutional amendment: high school kids.

The “Founding Philosophy and Principles Act” requires every student to take a semester-length course on the founding philosophy of the United States—with particular focus on “the limitations on government power to tax and spend and prompt payment of public debt.” The bill recently passed in the North Carolina Senate in April, and is currently heading to the Assembly for approval. In March, the same bill was introduced in Georgia and South Carolina.

Approved by ALEC’s board of directors in 2012, the bill is a more extreme and ideological version of a decades-old model—the similarly named Founding Principles Act that mandates a high-school course on the “founders’ principles” of Federalism. Not content with the original model, however, Don Vaughan—a former Democratic state senator and longtime ALEC member in North Carolina—decided to turn what was largely a call for a conservative civics into a tutorial on the moral virtues of private property, balanced budgets and the gold standard by introducing an amended version of the bill.

In this version, students must be taught to exercise “eternal vigilance” against government spending. They will also be instructed on:

In fact, none of these items are in the U.S. Constitution, at least not in the way ALEC reimagines them. Indeed, having just fought a revolution entirely on credit, the nation’s founding fathers were probably not eager to opine on the “prompt” payment of public debt. Rather, Section 8 of the Constitution permits the government “to borrow money on the credit of the United States” and to collect taxes to provide for "the general welfare of the United States."

Vaughan's amendment was voted down by a Senate Committee back in 2011. Undeterred, he brought the bill to ALEC, where it was met with enthusiastic approval from both state lawmakers and ALEC's Private Enterprise Advisory Council, which voted 9 to 1 to adopt the bill as model policy. The member corporations of this corporate inner circle, such as PhRMA and Pfizer—not to mention Exxon Mobil, Peabody Energy, Altria and Koch Industries—would all stand to benefit from defunding the FDA, EPA and other government agencies protecting people and the environment.

When Newt Gingrich and his party colleagues in 1994 unveiled their “Contract With America” promising to introduce a balanced budget amendment on the floor within 100 days, Mother Jones pointed out that they did so without “describing how deeply they will have to cut welfare, student loans, and a hundred government programs.”

The amendment was defeated but in November 1995 the GOP-controlled Congress tried to hold the executive branch ransom by sending Bill Clinton a resolution demanding hikes in Medicaid premiums and significantly weaker environmental protections so that the budget could be “balanced” within seven years. His refusal to cave to GOP demands triggered a government shutdown that lasted five days and a 21-day shutdown three weeks later.

In the end, Clinton balanced the federal budget and erased federal debt without an amendment. As political commentator Joe Conason put it in an op-ed for The Observer a few years ago, “Voting to raise taxes on the rich was the crucial step towards fiscal responsibility and a long period of high employment, national prosperity and international prestige.” Clinton-era budget surpluses remained until the George W. Bush's tax cuts helped reintroduce large deficits.

In 2011, a GOP standoff over the debt ceiling brought the U.S. treasury to the brink of default and led to the U.S. government getting a remarkable credit downgrade by Standard & Poors and other credit rating agencies. In 2013, House Republicans once again brought the government to a standstill, using demands for a balanced budget or lower debt ceiling to provide cover for a partisan attack on the Affordable Care Act. When the dust had settled, the costs included: 800,000 federal workers furloughed and countless of private contractors permanently laid off; a GDP that had plummeted by 0.5 percentage points, and $24 billion taken out of the economy, according to statistics compiled by the Congressional Research Service.

Why do we suspect this more recent history is unlikely to be part of the ALEC curriculum for high schoolers?

The article has been corrected to reflect the fact that John Kasich is the governor of Ohio.

Federal debt is over 18 trillion dollars. Is it fair to leave a bankrupt country to young Americans? Is it smart to run up enormous debts? Who will be hurt the most in a federal default, the poor and those dependent on government? Do we want to end up like debt-ridden Greece with 25% unemployment?
As a sovereign nation with a sovereign fiat currency it is not possible for the US to default on its debt. Furthermore, 80% of US debt is owed to US citizens. Are we going to foreclose on ourselves? The problems in Greece stem from their adoption of the Euro, making their finances more like a state's than a nation's where they can not produce the currency required to make their debt payments. Your question only shows your lack of understanding of macro economics and how modern sovereign currencies work. Thanks for playing.