After Wall Street collapsed the global economy in 2008, nations around the world were thrown into political turmoil. In the United States, the 2010 election swept into office a group of radical governors and legislators who promised jobs on the campaign trail, but delivered political retribution instead.

In Wisconsin, Scott Walker was elected with a promise to create 250,000 jobs. Instead, one of his first acts was to crush Wisconsin unions. Unions not only stand up for working families in state legislative battles, but they most often support Democrats in the election cycle with pooled resources and door-knocking power.

It is two years today since Walker "dropped the bomb" with a bill that eliminated collective bargaining for public workers in the state. He argued it was necessary to boost the economy, balance the budget and lure new businesses to the state.

Instead, Walker and his backers have created a long hard winter for Wisconsin's working families. Walker has 212,489 jobs left to deliver according to the ongoing count by the Milwaukee Journal Sentinel, but that has not stopped him from attempting to force low-income families reliant on Wisconsin's Foodshare program to look for work or starve.

Wisconsin Unions Drop Off a Cliff, Economy Falling Behind 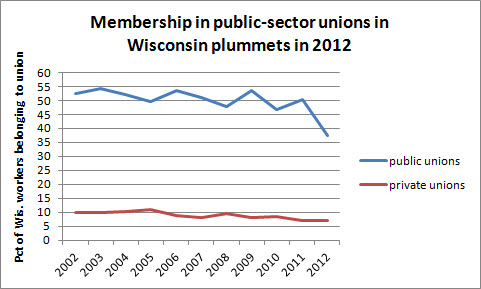 Walker has not only decimated unions, he has imposed deep austerity -- devastating cuts to key sectors such as higher education, schools, and transportation cutting thousand of public sector jobs.

He has thrown money down the drain with a newly privatized and corrupt economic development agency that promptly lost track of some $8 million in loans and has focused on the destructive practice of trying to poach jobs from other states. As Good Jobs First recently demonstrated in a national study, this practice robs taxpayers and doesn't work.

Now that Walker has had more than two years to implement these policies, how is Wisconsin doing? Not well.

Governor Mark Dayton took delight in pointing out in his "State of the State" address last week that Minnesota was 12th in the nation in job creation last year while Wisconsin "which, by the way, is 'open for business,' helped bring up the rear at 42nd," said Dayton. Minnesota has seen its wages and incomes trend upward while Wisconsin has been going in the opposite direction. A Minnesota Post reporter detailed the many ways in which that state is doing a better job with its economy. Illinois has higher unemployment but is also doing much better on the new job creation front than Wisconsin.

Jokes about Walker turning Wisconsin into "Wississippi" are not far off.  Wisconsin's ranking of 42 is behind Alabama (41), but still slightly ahead of Mississippi (48).

Walker Won't Create Jobs, But Will Force You to Look for Them or Starve

Wisconsin's terrible jobs performance is so anomalous that this weekend Walker announced $100 million in new spending to "ante up on jobs" says the Milwaukee Journal Sentinel. A great big bold number, but a closer look shows that the money is slated to build a faster system to track job data -- read, create a state-based alternative to the federal numbers which keep dishing up bad news -- and to invest in technical schools and the university system, which Walker had previously gutted with some $300 million in cuts.

In an unbelievably cruel move, he wants some folks to prove they are looking for work in order to qualify for Wisconsin's Foodshare program. Each month, people who have lost their jobs, who are living on a fixed income, who are retired, disabled or not able to work, get a little help from this lifesaving program.  Now Walker is saying to many, look for the jobs I have failed to create or drop dead.

Now Voting Rights are Under Threat

Walker and his friends, including the American Legislative Exchange Council caucus in the legislature, David Koch and his Americans for Prosperity group (who spent more money in the 2012 recall election than Walker's opponent), the MacIver Institute (a think tank in the service of austerity), and the Bradley Foundation, run by Walkers campaign chairman, have destroyed Wisconsin's reputation as a high-wage, labor-friendly state.

The ALEC contingent has drawn an exceptionally partisan map that will give Republicans and advantage in the election cycle for 10 years. Now they are turning their attention to "improving" Wisconsin's exceptional voting system as our new report "Rig the Vote" demonstrates. If the GOP moves forward with plans to end Wisconsin's 40 year history of successful "same day" voter registration and exceptionally high voter turnout, they will ignite protests of the kind not seen since February 2011.

The fightback continues. The Wisconsin Wave is bringing Dennis Kucinich to town 7:00 p.m. Tuesday night at the Barrymore Theatre. They are sponsoring a march on Wisconsin Manufacturers and Commerce on Wednesday and Wisconsin teachers and the TAA will rally at the State Capitol on Thursday at 4:45 pm.

I admit I have a very cynical but also practical attitude towards job creators. Over the years I have had to cobble together disparate jobs that may or may not fit with my skills. I have become a scrapper, a jack of many low skill trades. I have out of necessity adopted a motto: you have to be your own union. You have to smile and pretend you are grateful for their meager wage and eternal lack of incentives or raises. You have to conduct your own work slowdown in the face of ridiculous demands on your time and your dignity. You have to take your life back in whatever small ways you can. The ultimate act of defiance to which I may well have to resort, is to incorporate myself, in order to enjoy the same privileges that corporations enjoy: tax deductions for maintenance of machinery (my body), for food, water, and storage, and for any other expense related to keeping myself alive and going to work every day. Some of us are just not quick enough to re-tool in the dizzying speed of this global economy, and so we have become beasts of burden, expendable, and more of a burden ourselves than an asset. Pre-war Germany saw riots in the streets over the hearts and minds of workers. Today in the U.S., unskilled labor is over abundant, expendable, and unworthy of a living wage. Soon, though, the heads of conglomerates will find their servants have become their masters, as money will begin to lose its meaning.
Bravo Billirubin, you have summed it up most eloquently! I too am well educated but underemployed and have had to, as you say, "cobble together disparate jobs that may or may not fit my skills, and have become a scrapper." Your entire post describes exactly what I feel and where I am.
How did this man get back in office??? Was the rigging already started? Questions that need to be answered.