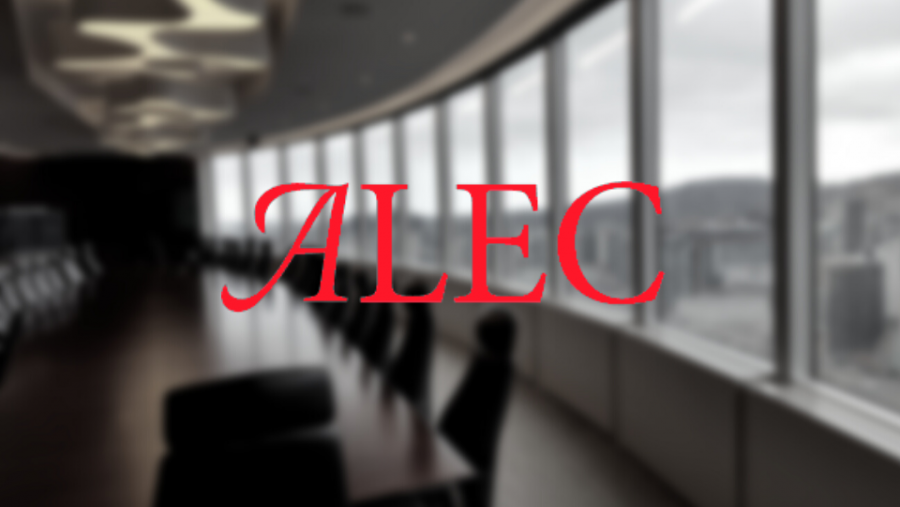 Utah has one of the worst gender pay gaps in the nation, but the American Legislative Exchange Council (ALEC) ranked it as the state with the best economic outlook in its annual survey "Rich States, Poor States," which was released on May 21 and funded by the right-wing Searle Freedom Trust.

In a pay-to-play arrangement, lobbyists from ALEC-affiliated corporations work behind closed doors with state legislators to write laws that will boost their profits. Companies sit on all nine of ALEC's task forces and vote with lawmakers to approve "model" bills.
Unsurprisingly, the right-wing trade association's annual economic survey ranks states as the "best" if, among other measures, they have low personal and corporate income taxes, low estate taxes, a low minimum wage, and they implement anti-union "right-to-work" policies.

Missing from ALEC's economic outlook analysis is the well-being of workers and other state residents. The top four states in the report—Florida, Oklahoma, Utah, and Wyoming—have some of the highest gender pay gaps, poverty rates, and/or percentage of residents without health insurance.

Stephen Moore, one of three authors of the report, founded the Club for Growth and has been the top economist at the Heritage Foundation. He was nominated to the Federal Reserve Board by former president Donald Trump in March 2019 but withdrew his name after media exposed his history of disparaging women.

Moore identifies the U.S.'s biggest economic problem as declining male earnings. The states rated highest in ALEC's survey are also the states where women are paid the least relative to men.

Despite the report's claim that Utah has the rosiest economic outlook among the states, women make 30% less than men. Only Wyoming, ranked fourth in ALEC's economic outlook, has a greater gender pay gap.

Rated as having the third-best economic outlook, Oklahoma has the fourth-worst gender pay gap of any state, with women making 27% less than men.

Two states that ALEC claims have the best economic outlook are some of the poorest in the nation.

Oklahoma has one of the highest poverty rates in the country at 15%. Nearly 20% of children live in poverty there.

Wyoming was seventeenth-worst, with 12% of families reporting food insecurity, and Utah ranked in the middle of the pack, at 11%.

Another measure looks at the percentage of households that used high-cost, high-risk forms of credit to make ends meet during 2017, the last year for which data are available, according to a Talk Poverty analysis. These credit lines include payday loans, automobile title loans, refund anticipation loans, rent-to-own, and pawning.

Oklahoma has the sixth-worst ranking on high-cost credit, and Wyoming the thirteenth-worst.

States with a lower minimum wage get higher rankings from ALEC.

All three states receive the top score on this measure because they use the federal minimum wage of $7.25 an hour as their state minimum wage. Twenty-nine states and the District of Columbia have a minimum wage above the federal rate, yet all of these are reported by ALEC as having worse economic outlooks compared to the three states discussed.
Florida's minimum wage, $8.56 per hour, is slightly more than the federal standard but still works out to under $18,000 per year.

Another measure is whether the state is "right-to-work." The anti-union law makes it optional for employees in unionized workplaces to pay union dues or other membership fees required for union representation, even though they benefit from the higher wages and better working conditions that the union negotiates.

Florida, Oklahoma, Utah, and Wyoming are all "right-to-work" states, so the ALEC report gives them the top score on this measure.

The ALEC survey lauds states with profitable corporations that don't have to negotiate with unions or pay above the federal minimum wage, but it does not measure the quality of life in those states.

Uninsured people are less likely to receive medical care and more likely to have poor health.

In 2019, 9.2% of Americans did not have health insurance. That year, Oklahoma had the second-highest rate of uninsured residents, at more than 14%. Florida (fourth-worst), Wyoming (sixth-worst), and Utah (eighteenth-worst) also had high uninsured rates.

Utah began a full Medicaid expansion program in January 2020, while Oklahoma recently expanded the program, which will cause its uninsured rate to decline. But Republicans in Florida refused to expand the program this year, even after the federal government offered to pay its full costs for two years, and Wyoming lawmakers killed the prospect this year as well.

In terms of health care access, a measurement of availability and use of health care, the top four states all rank near the bottom. Florida had the worst access among these states, with the ninth-lowest score, according to WalletHub.

One author, Arthur Laffer—often called the father of "supply-side or "trickle-down economics"—served in the Reagan Administration and is ALEC scholar-in-residence.

In addition to his work for ALEC, the Club for Growth, and the Heritage Foundation, Stephen Moore works with the Tea Party-aligned Freedomworks. He is frequently referred to as an "economist" in the media, despite pushback from tenured professors of economics due to his lack of a Ph.D. in the subject.

During the Covid-19 pandemic, the three authors launched the Save Our Country Coalition and co-chair the group, which urged states to fully reopen their economies long before it was safe for workers and promoted ALEC's deregulatory agenda.

Moore has spent the pandemic denying scientific reality in an effort to open up businesses and enrich their executives and shareholders regardless of a deadly pandemic and risks to employees.