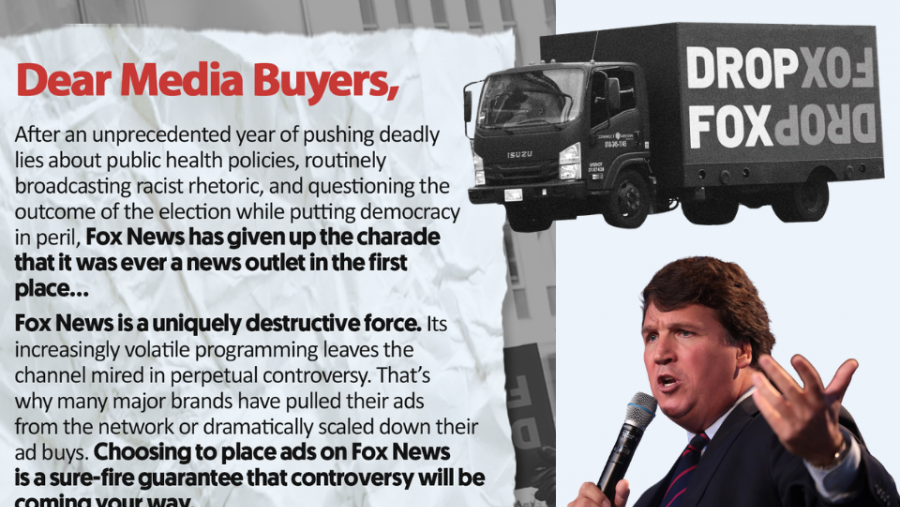 Fox News has been radicalizing the American Right for decades, and it has never been more racist and conspiratorial than it is today.

The Center for Media and Democracy tracks many right-wing media organizations, including the Daily Caller, The Federalist, and RealClear, which damage public discourse by publishing misinformation and, in some outlets' cases, attacking our democracy or promoting hate speech. These outlets get most of their funding from GOP megadonors, who often give through their foundations and donor-advised funds.

What makes Fox News different is that corporate advertisers, not conservative individuals, primarily fund its operations. Our reporting holds corporate power to account, and in the case of Fox News, one of the “big three” cable news networks, it’s especially vital to do so.

That’s why we joined over 40 organizations in signing a letter, coordinated by Media Matters for America and published today, calling on Fox’s biggest advertisers to #DropFox.

“Fox News is a uniquely destructive force. Its increasingly volatile programming leaves the channel mired in perpetual controversy,” the letter reads. “That’s why many major brands have pulled their ads from the network or dramatically scaled down their ad buys. Choosing to place ads on Fox News is a sure-fire guarantee that controversy will be coming your way.”

These companies need to stop buying ads on Fox. If they don’t, they must explain to the public why they choose to finance Fox News, which in recent months has constantly promoted the “Big Lie” of voter fraud and dangerous Covid-19 misinformation. They should tell the American people why they finance the career of primetime host Tucker Carlson, who regularly espouses white nationalist talking points on air.

The Center for Media and Democracy joins the Black Lives Matter Global Network Foundation, GLAAD, Public Citizen, and many organizations in signing this letter.