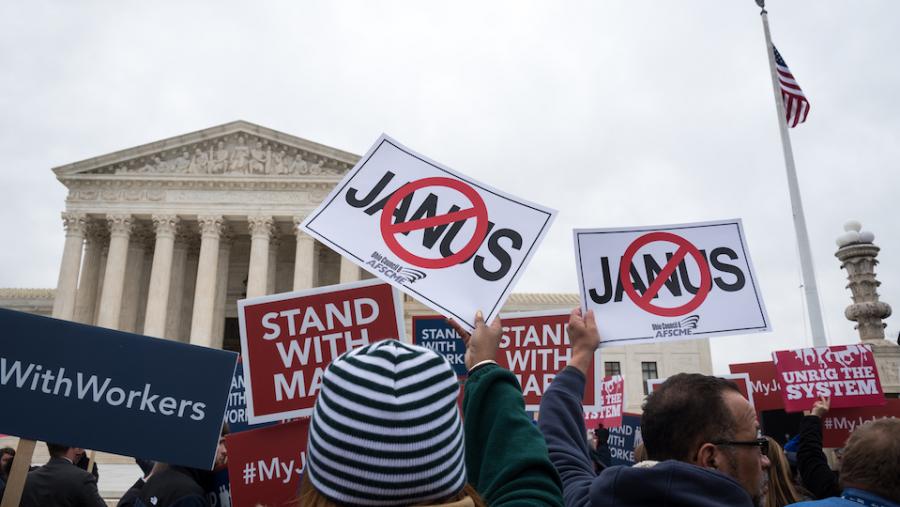 A "labor reform" booklet of 50 "state factsheets" obtained by the Center for Media and Democracy (CMD) reveals the ambitious agenda of the American Legislative Exchange Council (ALEC), a corporate lobby front group, to further weaken public sector unions in the wake of the Supreme Court's controversial ruling in Janus v. AFSCME.

The booklet appears to have been published in early 2019, but is being distributed at ALEC events this year.

In its June 2018 Janus decision, the Supreme Court overturned more than 40 years of precedent to rule 5-4 that public employees who don't join a union no longer have to pay "fair share" fees to cover the cost of collective bargaining on their behalf for better wages and working conditions. The decision creates a major "free rider" problem for public sector unions.

ALEC, a pay-to-play operation where legislators and corporate lobbyists meet behind closed doors to adopt model legislation on a broad range of public policy issues, has a long history of promoting policies detrimental to workers, including so-called anti-union, "Right-to-Work" bills and the anti-democratic Living Wage Mandate Preemption Act, which prevents cities and counties from setting higher minimum wages than what is required under state or federal law.

This booklet clearly shows that ALEC is continuing to push its union-busting policies, despite polls that show two-thirds of Americans approving of labor unions.

ALEC "Solutions" in Search of a Problem

The "solutions" ALEC offers to states in its factsheets are drawn from a list of six model bills that it has been circulating, three of which were highlighted in ALEC's "Public Sector Union Legislative Toolkit" exposed by CMD in August 2018 shortly after the Janus decision.

ALEC's  Union Recertification Act is based on Wisconsin's controversial law rammed through by Gov. Scott Walker in 2011 and would require unions to hold secret-ballot elections every two years in order to continue representing workers. A similar bill was introduced during a 2018 lame duck session in Michigan but failed to pass.

The Public Employee Choice Act would allow workers to drop out of public sector unions and also allow unions to avoid representing non-union workers, while the Public Employee Rights and Authorization Act would force unions to receive "affirmative consent" from public employees to collect dues and allow public employees to "revoke" that consent at any time. In practical effect, the ALEC bill would force all members to rejoin their unions.

Other "solutions" ALEC offers include the Prohibition on Paid Union Activity (Release Time) by Public Employees Act, which would bar public employers from paying employees for time they spend on union activities, and the Comprehensive Public Employee Freedom Act, which would prohibit public employers from requiring workers in a bargaining unit to join the union or pay dues, and allow individual workers to bargain independently with their employer.

The Union Financial Responsibility Act would give state government oversight power over public employee unions and freeze union dues at the level they are at the date of enactment of the bill. Any dues increases would require a majority vote by members, unless the union constitution authorizes the executive board to raise dues.

In ALEC's section on "noteworthy" legislation in the states, ALEC highlights what it perceives to be "anti-Janus" and "pro-Janus" legislation introduced following the Supreme Court's controversial decision. All five of the "pro-Janus" bills ALEC notes were introduced in Michigan, New Jersey, New York, and Pennsylvania in 2018-2019 saw no movement or died.

Of the seven "anti-Janus" bills introduced in California, Massachusetts, Pennsylvania, and Virginia in 2018, two were enacted in California. California's SB 1085 signed into law by the Governor in September 2018 requires public employers to provide, "reasonable leaves of absence without loss of compensation or other benefits for the purpose of enabling employees to serve as stewards or officers of the exclusive representative." The other, California's SB 846, signed by the governor four days before SB 1085, protects public employers from any legal claim to fees paid to unions before June 27, 2018.

ALEC's booklet identifies 42 cases pending in 12 states related to public sector union policy following the Janus ruling. Of these, at least 25 cases have since been dismissed and/or a summary judgement was ruled in favor of the unions being sued.

Plaintiffs in at least 15 of the 42 cases were represented by State Policy Network (SPN) members, CMD has found. SPN is a web of right-wing "think tanks" and tax-exempt organizations in 50 states, Washington, D.C., Canada, and the United Kingdom. Crushing unions has been a priority for SPN, ALEC's sister organization, that is called upon in state Houses to provide the academic legitimacy through "expert" testimony or studies in order to pass ALEC bills or other right-wing wishlist items.

SPN was instrumental in moving Janus to the Supreme Court, as CMD documented in a 2018 cover story for In These Times. SPN President Tracie Sharp laid out the reasoning for SPN's anti-union agenda to "defund and defang" unions in a 2016 fundraising letter obtained by CMD: "Big government unions are the biggest sources of funding and political muscle for the left--and a major obstacle to the ability of voters to reclaim control of American government. To win the battle for freedom, we must take the fight to the unions, state by state." In other words, the Right will win more political battles in the states if unions are weakened.

SPN members including the Buckeye Institute, Fairness Center, Freedom Foundation, Liberty Justice Center, and National Right to Work Legal Defense Foundation have all represented plaintiffs in litigation against public sector unions, CMD has identified. All of these groups either filed amicus briefs in support of Janus or provided lawyers to represent Janus when the case reached the Supreme Court.

Emails and audio obtained by CMD demonstrate that ALEC made a strong push to get lawmakers to focus on its anti-worker agenda at the States and Nation Policy Summit (SNPS) in December 2019.

On Tuesday December 3, the day before the meeting started, ALEC held a "Workplace Freedom Meeting" at the conference hotel from 12:00 to 5:00 p.m. ALEC covered the cost of one night at the hotel and $650 in travel reimbursements for attendees of the event, emails show.

The meeting seems to have been organized by Vinnie Vernuccio, a senior policy advisor with SPN and senior fellow at the Mackinac Center, who is referred to in an email to a legislator with questions about the event. Vernuccio has testified in multiple states in support of ALEC's so-called Right-to-Work Act, a policy that encourages workers to "free ride," gaining all the advantages of the union contract without paying a share of the costs of collective bargaining and worker representation.

According to an email to a Florida legislator, the agenda focused on: "Implementing the Janus decision;" "Reforming union release time so taxpayer dollars are not spent doing union work;" "Bringing democracy to unions via recertification;" and "Equipping government employers to comply with the Janus decision." Many of the bills detailed above relate to these agenda items.

Other speakers at the meeting may have been Sean Redmond, Executive Director for Labor Policy at the U.S. Chamber of Commerce, or Glenn Spencer, Senior Vice President of the Employment Policy division at the U.S. Chamber of Commerce. Both emailed lawmakers attending ALEC's policy summit seeking to discuss their "legislative agenda at the state level and various labor & employment issues that are being considered."

ALEC also gave Alaska Attorney General Kevin Clarkson a platform to discuss his extreme interpretation of the Janusdecision during a breakfast session at the policy summit. Clarkson told attendees that, before he assumed office, Alaska had allowed "Hotel California provisions in the [public employees'] contract," like the famous Eagles' song, "You can check in anytime you like, but you can never leave."

He went on to explain that he strongly believes that Janus requires states to collect "clear and compelling evidence" that public employees made a "knowing, voluntary, affirmative decision to opt in to the union," and that the opt-in has to be "contemporaneous," meaning that employees have to have a periodic time to affirm their union membership.