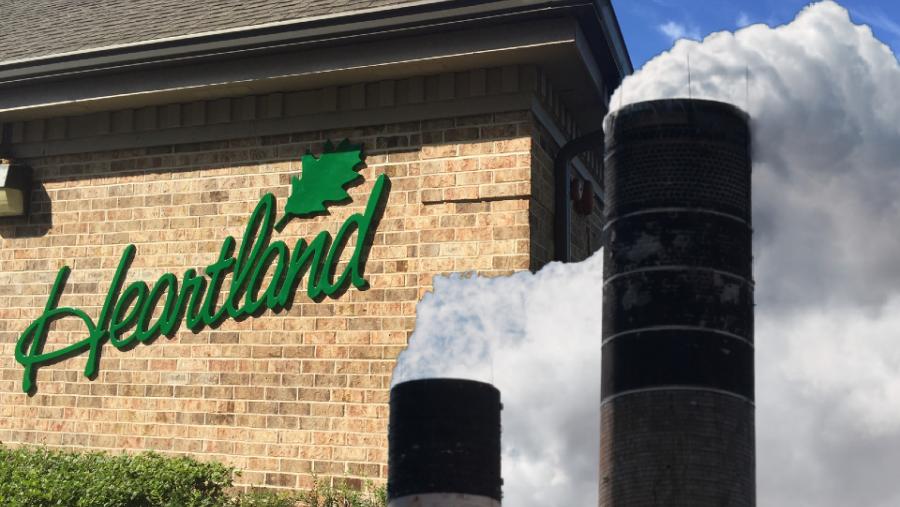 Major charities are giving one of the most notorious climate change denial groups a boost as it works to combat climate science in the U.S and Europe, a Center for Media and Democracy (CMD) investigation has found.

The right-wing, Chicago area-based Heartland Institute is known for spreading disinformation about the climate and was even called out by 19 U.S. senators in 2016 for being part of "a web of denial." In a week-long string of floor speeches, the senators denounced Heartland and other groups for participating in a "concerted campaign waged by the Koch brothers, major fossil fuel companies, identity-scrubbing groups like DonorsTrust and Donors Capital, and their allies to manipulate the public's perception of the climate crisis and curtail legislative action to address it."

Heartland's chief strategist and director of climate policy, James Taylor, traveled to Madrid to attend a gathering of climate science deniers last December, where he met undercover journalists posing as consultants for the German automotive industry. The alleged consultants said they wanted to pay climate denial groups to help out their clients, and Taylor was happy to oblige.

Taylor pitched the undercover reporters on a campaign against German climate protections--to lobby against the closure of fossil fuel-based power plants and the decline of diesel-based vehicles.

A German YouTuber named Naomi Seibt would be central to the operation. Seibt is affiliated with the far-right political party Alternative für Deutschland (AfD), appeared at the February 2020 CPAC outside of Washington, D.C., and has associated with white nationalists and made antisemitic comments. The consultants' auto industry clients would fund the campaign by donating anonymously to Heartland, which would likely collaborate with its German, climate change-denying counterpart, the European Institute for Climate and Energy (EIKE), which has close ties with AfD.

"If the donor does not want to be named, there are some groups in the U.S.," said Taylor. "One is DonorsTrust."

CMD has identified the donors behind $16.6 million of Heartland revenue from fiscal year 2014 through 2018, equivalent to 58 percent of the institute's contribution revenue from the calendar years of 2014-18. An additional $105,000 in donations have been reported for 2019 so far.

Over that time period, DonorsTrust and Donors Capital Fund--two opaque charities used by right-wing political donors such as Charles Koch--were Heartland's biggest funders, contributing millions of dollars. The charities are donor-advised fund (DAF) sponsors, which offer donors individual charitable accounts that they invest, for a fee, and distribute to the 501(c)(3) nonprofits of the donors' choosing. If donors contribute appreciable assets, such as stock, they avoid capital gains taxes while also enjoying the traditional charitable tax deduction. Donors' identities are hidden from the Internal Revenue Service, and they may choose to hide their names from their nonprofit recipients.

Donors Capital Fund and DonorsTrust combined to donate over $10.6 million to Heartland from 2014-18, which amounted to 37 percent of the institute's contribution revenue over those years.

In 2018, the most recent year on record, DonorsTrust gave Heartland $2.9 million, or 58 percent of the institute's budget and half of its revenue that year.

The Pew Charitable Trusts, an independent, nonpartisan nonprofit that devotes significant resources to environmental conservation, donated over $95,000 to Heartland. Felisa Klubes, communications director of Pew Charitable Trusts, told CMD, that Pew made the contribution in 2017 "in support of the institute's work to expand access to dental care by encouraging states to license dental therapists." That was the first and only grant to Heartland that Pew has made. Pew's description of the dental care access grants mentions three other right-wing groups whose dental access work it also funded in the 2018 fiscal year: the Koch-funded Texas Public Policy Foundation ($700,000), Americans for Tax Reform($170,000), and Goldwater Institute ($50,000). Part of Pew's funding for the Texas Public Policy Foundation goes towards the group's criminal justice reform program.

Heartland's Taylor told the undercover reporters that in addition to DonorsTrust, DAF sponsor the National Philanthropic Trust would be a good vehicle for industry donors to funnel money to his organization while remaining anonymous. The trust hasn't reported donations to Heartland since 2014, but it's possible donors began using it after mid-2018, the end of the trust's most recent tax year on record with the IRS. CMD recently reported that the National Philanthropic Trust is one of the biggest funders of right-wing sting operation Project Veritas, a nonprofit that receives the bulk of its funding from DAF sponsors and Koch network donors.

By far the biggest individual donor to Heartland in recent years is the Mercer family. Billionaire GOP megadonor Robert Mercer, who was co-CEO of the hedge fund Renaissance Technologies, has become one of the Right's biggest bankrollers. From 2014-17, the Mercer Family Foundation contributed nearly $2.6 million to Heartland. In 2018, the foundation's direct donations to the institute stopped but coincided with a huge increase in DonorsTrust contributions. That year, the Mercer Family Foundation gave DonorsTrust nearly $8.2 million to pass along to the Mercers' preferred nonprofits, possibly including Heartland.

Since 2014, the other biggest known funders of DonorsTrust are the Koch family's Knowledge and Progress Fund ($5.3 million), the Adolph Coors Foundation ($4.2 million), the Searle Freedom Trust ($2.6 million), and the Charles Koch Foundation ($980,000).

Bartley J. Madden is former managing director of Credit Suisse HOLT and is currently a policy adviser for Heartland. Madden appears to have lived and worked in Chicago until moving to Florida, where his foundation is currently based.

GOP megadonor Richard Uihlein and his wife, Liz, who have contributed the most money to super PACs in 2020 than any other individual or couple, run the Ed Uihlein Foundation, which is also based in the Chicago area. Richard Uihlein owns the ULINE shipping and packaging supply company.

Another Chicago-area donor, the Barney Family Foundation, was founded by finance executive Stephen Barney, who worked at American Century Mutual Funds, and his wife, Lynne.

The Roger and Susan Stone Foundation, which is based near Chicago, gave $70,000 to Heartland from 2015-17. Roger Stone is chairman and CEO of Chicago area-based KapStone Paper and Packaging, and he recently donated $1 million to the Koch-backed Americans for Prosperity Action, a super PAC, according to its February campaign finance report filed with the Federal Election Commission on March 19.

Major funders who have backed Heartland in the past include Chicago industrialist Barre Seid, who is thought to have donated over $13.3 million from 2007-11, according to DeSmog.

In the early 2000s, Heartland's climate change denial became so toxic that even the oil companies felt the need to distance themselves from the think tank. Exxon had funded Heartland for years, but in 2006 it severed its ties with the organization, not wanting to continue publicly associating with outright climate change denial. In 2008, the Mercers began pumping money into Heartland to make up for lost funds from the oil and gas industry.

Other fossil fuel interests that have financed Heartland in the past include coal company Murray Energy, the American Petroleum Institute, and the Illinois Coal Association.

Still, some oil and gas interests continue to help Heartland spread climate disinformation. In 2017, the industry lobbying group American Fuel and Petrochemical Manufacturers, which represents companies including ExxonMobil, Chevron, and Koch Industries, donated $75,000 to Heartland. Two executives of Flint Hills Resources, a subsidiary of Koch Industries that produces oil and petrochemicals, are members of the trade association’s board. 2018 tax records for American Fuel and Petrochemical Manufacturers are not yet available.

Despite millions of anonymous dollars coming in, Heartland is reportedly "broke," according to HuffPost. The institute laid off 10 employees in early March, accounting for more than half of the organization's staff. Former Wisconsin Republican state lawmaker Frank Lasée, who became president of Heartland in July 2019, allegedly mismanaged funds, leaving Heartland without the resources to continue its workload.

According to a recent report, Heartland is getting rid of Lasée and considering Taylor for the role of president.

Nonetheless, Heartland is planning to host its annual International Conference on Climate Change in May in Las Vegas, and the group continues to churn out climate change denialism.