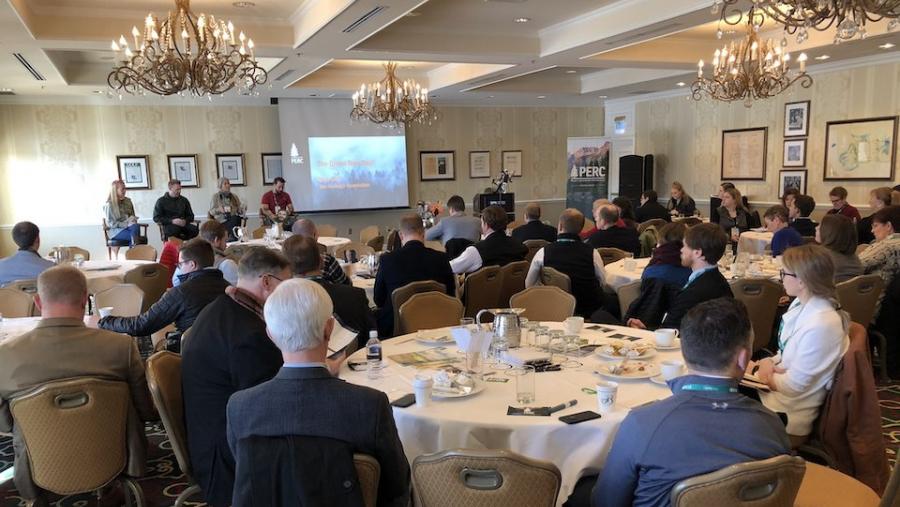 The State Policy Network (SPN) is holding its annual meeting at the five-star Broadmoor resort in Colorado Springs this week. While SPN - a right-wing web of "think tanks," advocacy groups, and other registered nonprofits in all 50 states, Washington, D.C., Canada, and the United Kingdom - publishes a list of its member organizations on its website, it holds its meeting in secrecy under tight security and does not disclose attendees.

In total, SPN currently has 162 member organizations, 64 "affiliate members" and  98 "associate members." The affiliates are state-based organizations that are called upon to provide the academic legitimacy for right-wing policies in the states - some of which are introduced in state houses as American Legislative Exchange Council (ALEC) model bills - while most of the associate members are national groups.

The Center for Media and Democracy (CMD) obtained an "attendee roster" of those registered for the 2019 SPN annual meeting. The 945 attendees include "researchers" and staff from SPN groups, funders, lawyers, and corporate lobbyists.

The agenda shows that attendees are again considering some of SPN's main policy objectives, including to "defund and defang" unions, promote fossil fuels, privatize education, and hide the identities of political donors.

Charles Koch's network of organizations dominates the attendee list with 139 registered, or 13 percent of all those listed. Koch's Americans Prosperity (AFP), his main political advocacy group following a reorganization of the network upon his late brother David's retirement, has 68 registered to attend. This is the largest contingency of any organization registered, including SPN, which sent 50 of its employees.

ALEC sent 15 of its staff to the SPN meeting, which should not come as a surprise considering how often SPN members back ALEC ideas and produce "research" in support of its cookie-cutter bills.

The Koch family has been a funder of SPN for years and many Koch groups sponsor the SPN annual meeting, including AFP, the Center for the Study of Economic Liberty at Arizona State University, Mercatus Center at George Mason University, and the Reason Foundation. All of these groups are represented at this year's meeting.

Other Koch groups that sent staff to the SPN meeting are the Cato Institute, the Center for Growth and Opportunity at Utah State University, the Charles Koch Institute, i360, the Institute for Humane Studies, Koch Companies Public Sector, and Stand Together.

In addition to Koch Companies Public Sector, the tobacco, fossil fuel, technology, and financial industries all sent lobbyists to the meeting.

Altria and Phillip Morris International have a long history of funding SPN and its members and sponsored and sent lobbyists to the meeting this year. SPN groups have lobbied in favor of new tobacco products and against cigarette and vaping regulations.

The technology giants Amazon, Google, and Facebook also have a presence at the meeting. Facebook and Google are sponsors, and Amazon joins Google in sending lobbyists. There are a couple panels on tech policy at the meeting, but it is also worth noting that SPN members spend millions on web services from these companies.

Mastercard and Wells Fargo have sent lobbyists as well, and both are sponsors of the meeting.

Growing Presence of the Christian Right

The Family Policy Alliance is sponsoring a panel with The Heritage Foundation on "Defending Rights in Healthcare, Education, and Law" to discuss "opportunities to advance sound parental rights policy at the state and federal levels." The "opportunities" sound like justifications for discrimination, as the summary for the panel states that "parents are facing unexpected threats" due to "new protected classes to existing Civil Rights laws."

James Bopp, the lawyer behind Citizens United who has led the fight against campaign finance reform and disclosure, is participating in a roundtable on how to win on ballot initiatives.

Here is the full list of registered attendees. Stay tuned to ExposedbyCMD.org for more coverage of the State Policy Network.