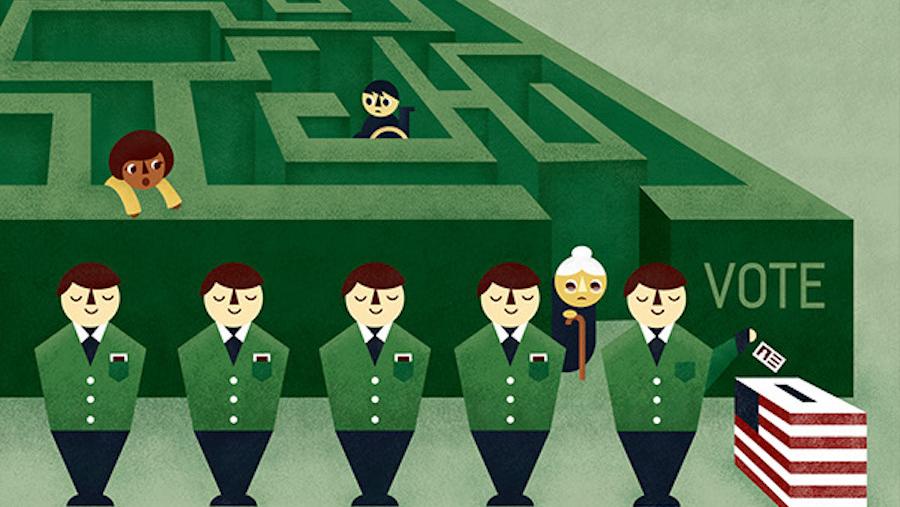 BISMARCK -- The U.S. Supreme Court decision to support North Dakota's voter ID laws eliminating the use of postal addresses on identification cards was only a nail in the voting coffin. The effort to suppress Native and rural votes began years ago, and carries corporate bill mill ALEC's fingerprints all over the fine print.

The 2009 ALEC-created Voter ID Act, which North Dakota has embraced, states that every voter must show proper identification -- and like Wyoming in 2011 the state took the proposal a step further by deciding that a post office address was not enough. Thousands of Natives possess only post office addresses on their tribal IDs, and live hundreds of miles from a handful of North Dakota Department of Transportation offices.

College students and low-income individuals who move during the year could also be disenfranchised, as they do not possess additional qualifying documents such as a utility bill or a paycheck stub.

ALEC, or the American Legislative Exchange Council, says it is nonpartisan, but is known as a powerful and secretive collaboration between big business and conservative politicians. Approximately 22 legislators in the North Dakota House of Representatives have ALEC ties, including representatives Al Carlson, Jim Kasper, Ben Koppelman, and Randy Boehning. Seven state senators are also listed as having ties to ALEC, including West Fargo's Judy Lee by the Center for Media and Democracy.

Five weeks before Election Day, the North Dakota Secretary of State issued an email alerting tribal leaders to the fact that post office addresses would no longer be acceptable. For many in rural areas obtaining proper identification or renewing a license within a month's time means they must travel up to 150 miles to a Department of Transportation facility, wait 50 minutes in a congested office open for hardly half a day, one time a month.

Currently there are eight Department of Transportation offices in the state: Bismarck, Devils Lake, Dickinson, Fargo, Grand Forks, Minot, Valley City, and Williston, most of which have regular operating hours. The Department of Transportation also has renewal offices in Beulah, Bottineau, Bowman, Grafton, Harvey, Linton, Oaks, Rolla, Wahpeton, and Watford City. Many of these offices are open half days, some for as little as four hours once a month.

During the 2016 legislative session the government reduced the days that some renewal offices could be open. Department of Transportation offices in Bowman, Linton, Rolla, Oakes, and Harvey are now open one day a month. Cities including Wahpeton, Bottineau, Beulah, and even Valley City, population 6,566, are open two days a month.

"The level of service is unacceptable," Representative Marvin Nelson said. "We were told there would be a day of service when two days did not meet demand and now we only get a few hours. Totally unacceptable."

The Secretary of State's office also reported that concerned citizens can start the switch-over process by contacting the county 911 coordinators for their registered 911 addresses. While some Native citizens report they have been waiting for three weeks to receive their physical addresses, all 53 county coordinators reported they have not had a sudden influx of calls in the past month.

The North Dakota Department of Transportation communications personnel Jamie Olson reported requests to change addresses on IDs has doubled so far in October.

The history, the timing, and the targeted population all point to a coordinated attempt to suppress the Native, rural, and college vote.

"I'm not going to ascribe motive to the North Dakota legislature, but the end result is making it harder for people on the reservation to vote," former US Attorney for the District of North Dakota Tim Purdon said.

This article was first published in the High Plains Reader here.

The Campaign Legal Center and the Native American Rights Fund have filed a lawsuit on behalf of the Spirit Lake Tribe and six individual plaintiffs to ensure that eligible Native American voters residing on reservations in North Dakota will be able to cast a ballot in the 2018 midterm elections and in all future elections.