Book Review: The Fall of Wisconsin Is an Uplifting Read | PR Watch

Book Review: The Fall of Wisconsin Is an Uplifting Read 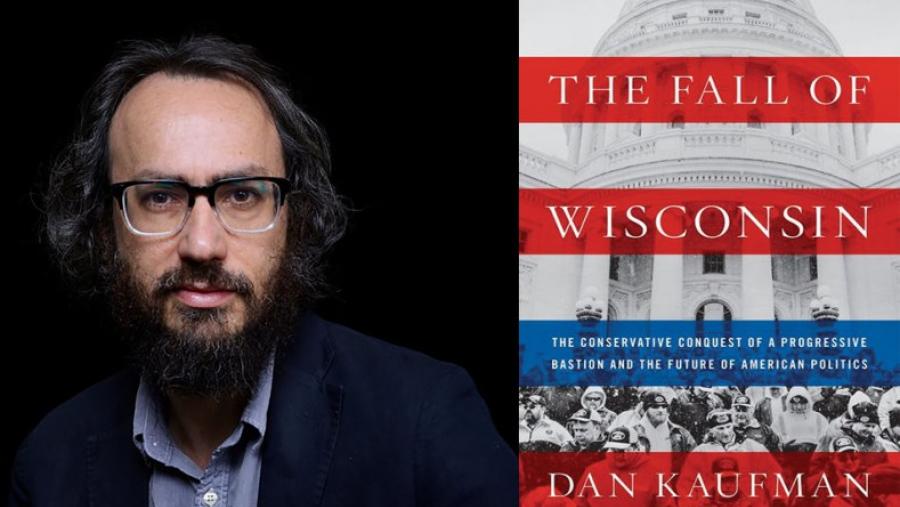 A must-read on the summer book list is The Fall of Wisconsin: The Conservative Conquest of a Progressive Bastion and the Future of American Politics, by Dan Kaufman. This remarkable book takes readers on a winding journey through the Native American, Scandinavian, and Socialist roots of the Badger State to its latest incarnation as a Trump satellite state.

"Donald Trump's victory may have shocked the Clinton campaign and media pundits, but the result merely heralded the final stage of Wisconsin's dramatic transformation from a pioneering beacon of progressive, democratic politics to the embodiment of that legacy's national unraveling," writes Kaufman.

Wisconsinites have had a front row seat to this unraveling. But this is not a gloomy book, nor the dry, didactic reporting of the mainstream newspapers stripped of historical context and evocative language. It is a beautifully drawn portrait of resistance told via the voices of the state's beleaguered citizenry.

The book highlights Mike Wiggins, the chairman of the Bad River Band, and other tribal leaders who successfully battled the Gogebic Taconite iron-ore strip mine in the Penokee Hills after the company crafted its own bill and paid millions to buy off the state legislature. "The tribes, Wisconsin's first conservationists, have now become the last hope, the only group with any power to stop the dismantling of the state's environmental heritage," writes Kaufman in one of the book's most affecting chapters.

It stresses the national importance of the fight over Act 10, Walker's union-busting legislation, which blindsided the voters--even Republicans. "Walker's agenda, which was always there but nobody knew it, really came from somewhere else, like the Koch brothers, the national party, and ALEC [the American Legislative Exchange Council]. I don't think it was a local agenda, frankly," said former GOP State Senator Barbara Lorman.

It details the chutzpah of average citizens who step up to run for office when no one else will. From Lori Compass, who single-handedly launched a recall against Senate Majority Leader Scott Fitzgerald in 2011, to Randy Bryce, the ironworker who battled ALEC's anti-union "right to work" bill and the gutting of prevailing wage. In 2018, Bryce decided to step up and take on one of America's most prominent politicians, Speaker of the House Paul Ryan.

Dozens of other Wisconsinites, including Tia Nelson, Jesse Barnes, Tim Cullen, Curt Meine, Todd Albaugh, Dave Poklinkoski, Marvin DeFoe, Dale Schultz, Tim Cullen, and more, are interviewed and paint a portrait of a resistance that didn't waver though the deck was stacked against them. Included in this list is Rep. Fred Kessler, who found a way to challenge the GOP's unprecedented partisan gerrymandering in federal court and get it ruled unconstitutional. Woven into the these tales are the stories of Chief Buffalo, "Fighting Bob" La Follette, socialist Emil Seidel, environmentalist Aldo Leopold, educator John Bascom, Congressman Victor Berger, Earth Day founder Gaylord Nelson, and other historical figures.

This became crystal clear to a young mom living and working in Madison named Chris Taylor. Walker's attack on unions and on the public schools where her kids went to school inspired Taylor to run for office in 2012 and, once elected, she continued to dig deeper into the group's radical agenda, which has prompted over 100 American companies to stop funding it. Just last week, long-time supporter ExxonMobil stopped funding ALEC.

"ALEC defines the parameters of what's possible," Taylor explains in the book. Since being elected to the State Assembly, Taylor has taken it upon herself to attend ALEC meetings as often as possible in order to report on the organization for multiple outlets. Taylor describes in the book how isolated she feels in a sea of conservatives, including being chased through the halls of one meeting by a drunken legislator.

Taylor explains well the critical "infrastructure" that the GOP built in the state with the support of the $900 million Lynde and Harry Bradley Foundation, which the Center for Media and Democracy exposed in an 11-part series in 2017, and how that infrastructure was critical to the election of Trump and the defeat of Clinton. This infrastructure included candidate training, ALEC politicians, state-based "think tanks," legal teams, and phony media outlets.

The book tells a tale of how Wisconsin "went from a state widely admired as a 'laboratory of democracy' to a testing ground for national conservatives" bent on making key states Republican strongholds. "Those efforts have been wildly successful, culminating in Wisconsin's startling deliverance of the White House to Donald Trump," writes Kaufman.

Grover Norquist explains the centrality of Walker's Act 10 legislation to the Trump election in the book: "Donald Trump's unexpected victory in 2016 did not lay the groundwork for Republican political dominance. But the March 2011 signing of Act 10, a dramatic reform of public-sector labor laws, by Wisconsin's Scott Walker certainly did. To understate it: If Act 10 is enacted in a dozen more states, the modern day Democratic Party will cease to be a competitive power in American politics. It's that big a deal."

Norquist's anti-union coalitional efforts, hyper-funded by the Kochs and the Bradley Foundation, helped take the Wisconsin "model" national. The nation is now facing an Act 10 of its own, as Trump's pick to the Supreme Court, Neil Gorsuch, served up the deciding vote for the June Janus vs. AFSCME Council 31 decision, which will introduce "right to work" conditions nationwide, as the Center for Media and Democracy detailed in an award-winning investigation in February.

HOPING FOR AN ENCORE

Kaufman followed his book with a New York Times essay "Progressive Populism Can Save Us From Trump." Many in Wisconsin, who gave Bernie Sanders 71 of 72 counties in 2016, hope he is right.

There is only one flaw in Kaufman's important book. Walker's brain, R.J. Johnson, is only mentioned once. Johnson, a native of Florida, is not only Scott Walker's chief political advisor, but he also oversaw and funneled some $20 million in dark money into the 2011-2012 recall races, and millions more into Senate, Assembly, and judicial races, prompting a criminal investigation by a Republican state prosecutor. Johnson has been responsible for the most disgusting political ads ever aired in the state, the utter destruction of the Wisconsin Supreme Court (turning one of our most respected institutions into what The New Yorker called a "disgraceful mess"), and the wholesale dismantling of Wisconsin's clean election laws. Few political operatives have had such as impact on the state as this slavish servant of secret money in campaigns and elections.

Let's hope Kaufman is saving material for his next book.

You can see Dan Kaufman in Wisconsin next week.