Is ALEC Too Extreme for Exxon? Long-Term ALEC Board Member Dumps ALEC over Climate Denial Policy​ 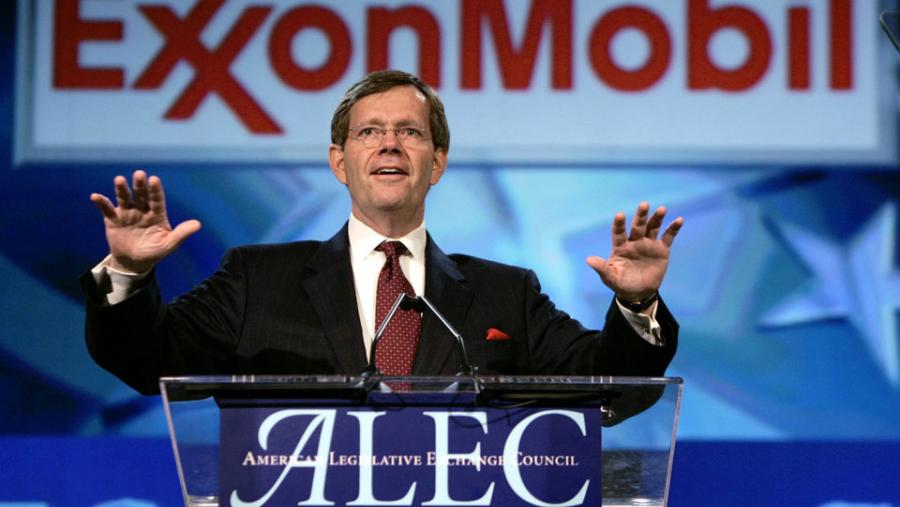 ExxonMobil, the largest oil and gas company in the world, will not renew its membership in the American Legislative Exchange Council (ALEC) after a split within the corporate lobbying group over how to address climate change, Bloomberg reported earlier today.

Exxon's exit follows a disagreement over a resolution introduced in December by the Heartland Institute, which denies climate change, that would have asked the federal government to reconsider its findings that greenhouse gasses are harmful to human health.

The EPA did its spadework and laid out the scientific foundation of the endangerment findings in over 200 pages of technical documentation in 2009. Former EPA Administrator Scott Pruitt failed to reconsider those findings, much to the disappointment of the Koch crowd.

Although large companies like Ford, Google, Microsoft, Coca-Cola and many others have cut ties with ALEC, few have given and supported ALEC as much as Exxon has. Exxon was listed as a "major contributor" to ALEC as far back as 1981 and has given ALEC millions over the years to promote its corporate agenda. Exxon has also consistently served on ALEC's Private Enterprise Board.

Reaction to the Announcement

"This is a major loss for ALEC. It's not just the financial support that Exxon provides, which has been significant over the years. This also represents a growing split between oil and gas majors that are increasingly concerned about their public image, and groups like ALEC that still regularly promote debates about climate science on their agenda," said Nick Surgey, co-director of Documented.

"Exxon's departure should send a strong message to ALEC that it's extreme agenda and undemocratic, secretive operations have no place in American politics," said Jay Riestenberg, campaigns & media strategist at Common Cause.

"It's very significant when a giant of the fossil fuels world thinks that ALEC 's denial of the existence of climate change is intolerable. I hope that other responsible corporations that are still members of ALEC will follow suit," said Wisconsin State Rep. Chris Taylor, who has attended ALEC events and written about its climate denial positions.

With regard to ALEC and the Koch brothers' hostility to renewable energy and public transportation, Taylor said, "Their positions belong in the dinosaur age. We need to be investing in transit and renewables, and they just keep throwing up road block after road block."

"Other major oil companies, including BP, Royal Dutch Shell and ConocoPhillips, left ALEC years ago. It's about time ExxonMobil finally did, too," said Kathy Mulvey, fossil fuel accountability campaign director at the Union of Concerned Scientists, in a formal statement. "But the company has a lot more to do to set things straight." Exxon continues to fund the U.S. Chamber of Commerce and the National Association of Manufacturers, both of which continue to do battle with groups and regulators attempting to address climate change, Mulvey said.

In October 2016, the Center for Media and Democracy (CMD) and Common Cause filed additional evidence for their 2012 IRS whistleblower complaint against ALEC detailing how Exxon had pumped $1.7 million into the front group "to promote the oil giant's climate denial policies and legislative agenda, in gross violation of ALEC's 501(c)(3) charitable status."

ALEC claims to spend zero dollars on lobbying but the complaint showed that Exxon had deliberately used ALEC over two decades as its lobbying arm to advance its position on cap-and-trade policies, the Keystone Pipeline, the Obama Clean Power Plan, and fracking.

CMD brought this concern to the attention of the Senate Committee on Foreign Relations in January 2017 when ExxonMobil's former CEO, Rex Tillerson, was nominated to be President Trump's Secretary of State.

"For years, Exxon used ALEC as a key asset in a fossil fuel industry campaign to sow uncertainty about climate science, undermine international climate treaties and block legislation to reduce emissions," said Arn Pearson, executive director of the Center for Media and Democracy, who drafted the 2016 IRS complaint. "And New York and other states have been investigating Exxon for its role in hiding evidence of its climate impact from shareholders and the public. So it is ironic that ALEC's anti-science stance has apparently become too extreme even for Exxon."

Exxon did not respond to CMD requests for comment.