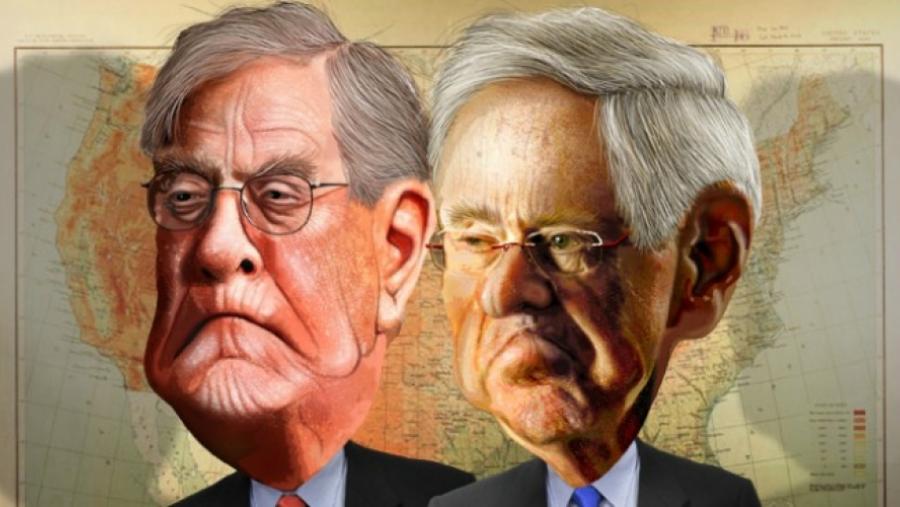 The annual Koch donors summit took place at the five-star Indian Wells Resort and Spa in the California desert at the end of January. The millionaires and billionaires called to the posh resort from all parts of America by the Koch brothers pledged $100,000 or more for a $400 million effort to keep the U.S. House and Senate in Republican hands in 2018.

At the same time, the donors pledged to go to war with parents and teachers in Arizona who are fighting to block the state’s massive school voucher expansion. Since taxpayer “vouchers” for private and religious schools were first put on the ballot in Michigan in 1978, they have been consistently rejected by voters who remember their roots in the segregationist south and understand that the well-off will take the money and run, leaving community schools without the funding they need and deserve.

The Koch network of funders hopes to reverse this trend when vouchers are put before the voters of Arizona in 2018. “Koch donors see Arizona as ground zero in their push” to transform the education system, reports the Washington Post.

Arizona public schools are in crisis. Between 2008-2012, Arizona cut more funding to K-12 public schools than any other state, and schools have not yet recovered. Today, per pupil spending is down $800 from where it was in 2008, classrooms are large, and Arizona school teachers are the worst paid in the nation.

Arizona Governor Ducey, who has been attending Koch donor summits since 2011, is up for reelection in 2018 and is all of sudden pledging new money for schools. His fate is intertwined with Proposition 305, a statewide referendum opposing his massive school voucher expansion, which will be on the ballot at the same time.

The roots of Proposition 305 can be traced to the Koch-funded American Legislative Exchange Council (ALEC). In April 2017, the Arizona legislature narrowly passed SB 1431, geared to expanding the state’s small educational savings account (ESA) program to all 1.1 million school children over time. The bill was based on an ALEC “model bill,” and the lead sponsor was ALEC member and former State Senator Debbie Lesko. ESAs work like school vouchers because they siphon public taxpayer money from community schools and transfer those funds to private and religious schools.

A passel of interlinked right-wing groups that fund and participate in ALEC, including the Koch’s astroturf group, Americans for Prosperity, the DeVos family’s American Federation for Children, and the State Policy Network’s Goldwater Institute joined the push to expand the state’s voucher program (even though its small scale voucher plan was not popular with parents and not yet full.) Betsy DeVos is the current Secretary of Education.

But public school parents and educators fought back, gathering enough signatures to put a “veto referendum” on the ballot for voters to decide. Americans for Prosperity sued the folks that gathered the signatures, alleging all sorts of improprieties like forgetting to check the right boxes on each petition, but the case was thrown out in short order. Even though the Kochs are appealing that ruling, it is likely that Proposition 305 will be voted on in November 2018.

Now the Washington Post is reporting that the billionaire industrialists Charles and David Koch and their coterie of millionaire and billionaire funders are getting involved, promising a David and Goliath type battle over the future of America’s public schools.

Changing the education system as we know it was a central focus of a three-day donor seminar that wrapped up late last night at a resort here in the desert outside Palm Springs.

“We’ve made more progress in the last five years than I had in the last 50,” [Charles] Koch told donors during a cocktail reception. “The capabilities we have now can take us to a whole new level. … We want to increase the effectiveness of the network … by an order of magnitude. If we do that, we can change the trajectory of the country.”

The Post reports that Governor Ducey was there to warn billionaire donors that if universal vouchers lose in Arizona they won’t be able to legislate on the topic in the future. “I didn’t run for governor to play small ball,” said Ducey. “I think this is an important idea.”

But as an increasing number of studies are showing, Ducey’s “important idea” has proven to be a disaster for kids.

A growing body of studies on state and local voucher programs has found startlingly lousy academic results for voucher students. A 2015 study of Indiana’s voucher program found students who transferred to private schools using a voucher experienced dramatic losses in mathematics achievement and no improvement in reading. In 2016, researchers published a major study of Louisiana’s voucher program showing that elementary school students who started at the 50th percentile in math and then used a voucher to transfer to a private school dropped, on average, to the 26th percentile in just one school year. Martin West, a professor at the Harvard Graduate School of Education, said the negative effects in Louisiana were “as large as any I’ve seen in the literature” in the history of American education research. Similarly, a 2017 study of voucher students in Washington, D.C. showed voucher recipients did significantly worse on a national exam of math skills and fell a bit behind in reading.

But the lives and livelihoods of children–who only get one shot at a good education–don’t really matter to the Koch donors and the corporate interests who back this agenda. Ideological extremists like Charles Koch are so opposed to government, they think the minimum wage and Social Security are bad ideas. They have long been at war with the teachers’ unions as they battle for better schools and better services and have advanced a systematic attack on teachers’ unions all the way to the Supreme Court of the United States, which will hear a case, Janus v. AFSCME, this month that could deal a major blow to public-sector unions nationwide.

Also advancing this agenda are private companies, like the scandal-plagued K12 Inc. which is supported by U.S. taxpayers and pays their CEOs millions in annual salaries ($4 million in 2017), pushing hard for vouchers and the privatization of schools so they can rake in more profits.

ALEC initially pitched vouchers as a civil rights ticket for poor and minority children, and for foster children or special needs children. But now it has abandoned that spin and is simply pushing vouchers for everyone, including the wealthy families attending private and religious schools. In Indiana and in Wisconsin, where two of the largest voucher experiments are underway, an increasing number of voucher recipients are wealthier families who would have sent their kids to private schools without a voucher. That’s right, taxpayers are being forced to fleece the public school system to support kids whose parents would have sent them to private and religious schools anyway.

The Kochs are already spending big in Arizona. As CMD reported, the Koch’s Latino front group, the Libre Institute was already up with ads trying to convince parents that vouchers were a fine idea. Since that didn’t appear to move the needle, Libre has changed tactics and has started knocking on doors to convince Hispanic families that vouchers are great.

“We’re seeing in Arizona that the Koch network is getting savvier. They’re hiring people who look like the community and are paying them to knock on doors. They are engaging in astroturf activism which means the real grassroots and their advocates need to be organized, unified and strategic,” said Dawn Penich-Thacker, the spokesperson for the anti-voucher group Save Our Schools Arizona.

But the ads are not stopping. Governor Ducey’s big backers, like the Arizona Chamber of Commerce, have started a new group called the “Arizona Education Project” and recently fielded a soft-sell TV ad blitz to say  “Arizona schools are making progress.” The ad war will no doubt gain steam as November approaches.

In the meantime, the poor performance at Ducey’s charter schools run by private operators continue to make headlines. A private charter school called “Discovery Creemos Academy” shut its doors with no notice this week, a day after the 100th school day. (The state disburses payment to schools based on 100th day enrollment numbers.)

Teachers were left without pay and the parents of 652 students were left scrambling. The state had plenty of indicators that there were problems at the school: the school was millions in debt, the principal paid tens of thousands of dollars to himself and family members, and the school had garnered an “F” from the Arizona board of education. But the state failed to take action to protect children from a traumatic disruption of their schooling.

Far from being an anomaly, this happens regularly in Arizona and in other states with unaccountable charters and private voucher schools. In Milwaukee where the voucher school “experiment” began, 41 percent of the private schools that participated in the program between 1991-2015 closed their doors, a result that stunned the pro-voucher researchers at the University of Wisconsin. Sometimes the head of the voucher school moves to another state and starts all over again.

The battle in Arizona this year should be on everyone’s radar say public education advocates on the ground. If the Kochs win in Arizona, they won’t stop there.

“Arizona should be instructive to the rest of the country. Privatization, the battle cry of school choice, voucher programs — the entire country needs to watch and engage the voucher battle happening in Arizona in 2018. If the Koch’s dark money groups keep voters from having their say in November, or if they pour millions, as promised, into a pro-voucher campaign and win, every other state with limited voucher programs can be sure they’re next for a massive expansion battle,” said Penich-Thacker.