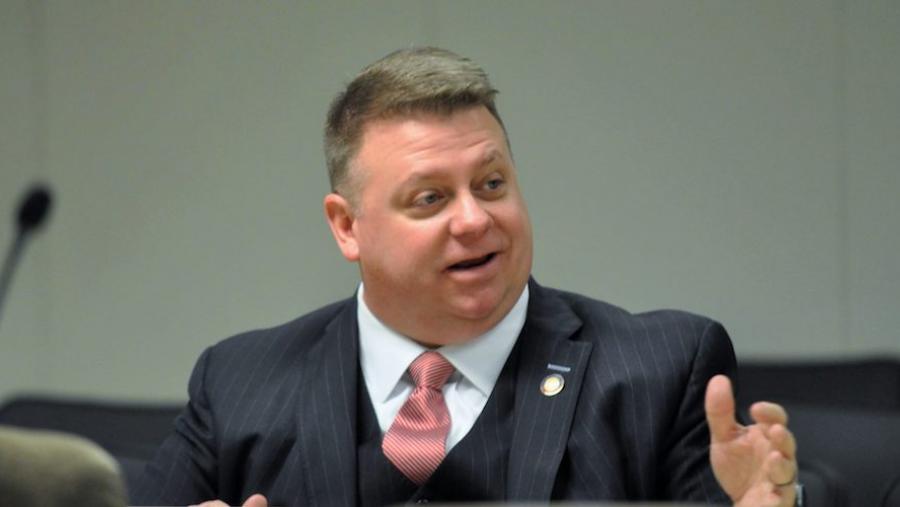 Saine, who took office in 2011, has co-sponsored many bills held dear to ALEC, including those on charter schools, limits to speech on campus, a constitutional convention and federal preemption of state and local rules governing fracking. (View his voting record here.)

For pushing the ALEC agenda, Saine was awarded the 2014 ALEC “Legislator of the Year,” an award that seems to be a requirement for its top post.

Despite his ALEC accolades, Saine’s legislative career in the Tar Heel state has been mired in controversy.

Like other ALEC state politicians, Saine has done the bidding of the telecommunications industry by sponsoring a bill to create state authority to allow communications companies to install cell phone towers in public right-of-way areas, diminishing local control of this issue.

AT&T is a member of the American Legislative Exchange Council (ALEC) and had a seat on ALEC's corporate "Private Enterprise" Board as of 2016. It gave Saine $3,500 in 2016 and for the last two years the telecomm industry has given him $20,000 altogether.

Ironically this is a little more than what he spent from his campaign funds on business suits. You read it right – he used campaign money, collected from lobbyists and PACs to buy a new wardrobe. His campaign finance report for the first half of 2015 showed his committee spending nearly $19,000 at a custom tailor and two retailers.

When the unusual expenditure hit the papers, Saine said this was a fair use of his campaign funds “When you’re short and fat like me, you can’t buy off-the-rack without paying many, many dollars in alterations,” he said.

Saine might be using his new duds to help out the charter school industry. Saine sits on the board of the Charter Schools USA-backed West Lake Preparatory Academy.

“They [Charter Schools USA] invite me to all the ribbon cuttings and openings, so it’s kind of an interesting perspective that I have,” Saine said.

That “interesting perspective” has paid off for Saine.

“Seven days after Rep. Saine and other members of the non-profit board that will oversee the charter school they hope to open in 2018 submitted their charter school’s application to the state Office of Charter Schools, Saine’s campaign received a $3,000 check from Charter Schools USA CEO Jonathan Hage.

With a state contract worth millions at stake, the contributions appear to be an example of pay-to-play politics.

“It’s the temporal proximity of the contribution to legislative activity that casts a shadow on the legitimacy and independence of that activity. This is different because it’s not an instance of filing a bill or seeking an action on behalf of an entire industry or very large group. Instead, you have a very specific group receiving an emolument timed very close to a donation to a campaign. It’s not illegal, but the action and corresponding appearance breaks the spirit of the ethics code, which is to prohibit the acts or appearance of impropriety or bias,” executive director of the North Carolina Justice Center Rick Glazier said.

The contributions from AT&T and Charter Schools USA were disclosed in campaign finance reports. However, a May 2017 report from Democracy North Carolina, a group that promotes citizen ownership of government, found that Saine had the “second worst disclosure failure rate” among North Carolina candidates for office in the 2016 election cycle. Further skeletons may yet emerge from Saine's closet.

The custom suits will serve Saine well at the posh resorts where ALEC meetings are held. In addition to its board of politicians, ALEC has a Private Enterprise Advisory Committee, whose national chair is Marianne Eterno of the Guarantee Trust Life Insurance Company.