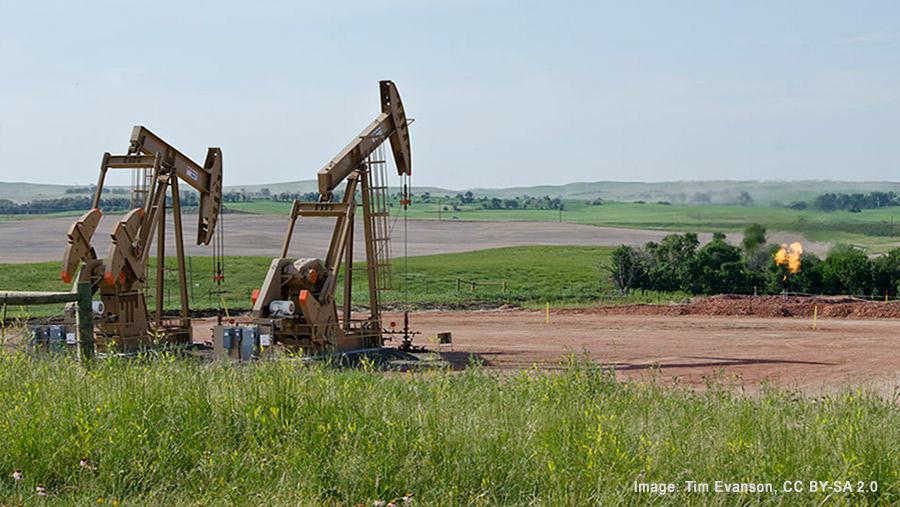 Corporations that profit from fracking funneled millions to PACs for "independent expenditures" in the 2016 election cycle, according to Federal Election Commission filings.

For example, the fracking giant Devon Energy gave $500,000 to the "Congressional Leadership Fund," a Super PAC "exclusively dedicated to protecting and strengthening the Republican Majority in the House of Representatives." Devon is notorious for helping to bankroll the fight against citizens in Denton, Texas, who won a bid to ban fracking in 2014 . The Denton ban passed with 59% of the vote, but Texas state legislators and members of the American Legislative Exchange Council nullified that local initiative and pre-empted. Devon spent $195,000 in disclosed spending in the local battle and has spent an untold sum to influence the results local and in the state capitol.

Another corporation with a big interest in fracking gave an additional $500,000 to the Congressional Leadership Fund. That half million dollar donation came from Hushang Ansary, the Chairman of Stewart & Stevenson, a manufacturer and distributor of well-stimulation equipment like fracking blenders, fracking pumps, and chemical additive units.

Fracking special interests also gave at least $3.35 million to the "Senate Leadership Fund," a Super PAC with "one goal: to protect and expand the Republican Senate Majority." That sum includes $250,000 from Continental Resources, a self-described "leader" in fracking and a $250,000 check from Hushang Ansary, the Chairman of Stewart & Stevenson.

The outside spending equivalents that support Democrats--the House Majority PAC and Senate Majority PAC--received no comparable reported donations from the fracking industry.

Fracking companies also gave overwhelmingly to the GOP through corporate PACs that include donations from executives and other employees.

When the 115th Congress convenes in January 2017, fracking interests will be well-positioned to play with federal legislation after spending so much to help Members of Congress elected. The Republican Party is firmly in the hands of fossil fuel interests including the fracking industry.

(There is no reported figure for how much such corporations spent on groups that are registered as 501(c)(4) non-profit organizations that do not disclose donors and which have grown dramatically since the Citizens United decision. Unlike Super PACs, so-called social welfare organizations like Karl Rove's "One Nation" do not disclose their donors but sometimes play an influential role in the elections. It is not known how much money they may have received from fracking interests but they have received such funding in the past, according to the limited information available.)

The fracking industry also played big in 2016 in state elections, particularly in states that have shale gas formations and tight oil deposits.

In Pennsylvania, where the bulk of the Marcellus Shale formation lies, fracking interests contributed at least $700,000 this election cycle. Amongst those interests was Chesapeake Energy, a company that spent $111,800 this cycle. Its former CEO, Aubrey McClendon, once wrote a contribution check to then-Governor Corbett that "arguably changed not just the history but also the political direction of the state."

The second largest overall spender in state's 2016 elections was the Senate Republican Campaign Committee of PA. State filings show the committee was financially supported by Consol Energy, Range Resources, Southwestern Energy Company, and Marathon Petroleum Corporation, all of whom are major players in the fracking industry.

In North Dakota, the home of the Bakken Formation, fracking interests like Continental Resources contributed roughly $100,000, a significant amount in a small state.

These numbers are by no means a final tally. There are simply too many campaign spending vehicles to account for, from the "dark money" groups to national organizations like the Republican State Leadership Committee (RSLC) that funnel corporate money into state races.

The RSLC, for example, received at least $200,000 from Devon Energy, $201,000 from Marathon Petroleum, and $150,000 from Noble Energy–all of whom operate fracking wells–yet state campaign finance filings only show the Republican State Leadership Committee's name when the committee makes a disbursement, if the name is mentioned at all.

There is a reason why fracking special interests sometimes hide their election activities: the fracking process is so intrusive and damaging, it is leading to popular revolt through local democratic initiatives by Americans affected by the process.

Communities that have been fracked are torn apart – physically, metaphorically, ideologically–in a process that shakes them to their core.

Although it is particularly salient with fracking, this "popular revolt" phenomenon extends to a host of public policy issues. Repressive workplace conditions, hazardous levels of gun violence, and the unjust deportation of migrant workers have led many municipalities to democratically take action by raising the minimum wage, establishing gun safety measures, and enacting sanctuary city policies.

Local governments can right these wrongs, and can ban invasive and harmful practices like fracking, which is why local democracy is seen by corporate interests as a threat. As CMD has documented, ALEC corporations, including fracking operators, have worked through ALEC and state legislatures to try to supplant local democracy and preempt/prevent cities from regulating corporate activities.

ALEC legislators who are members of the GOP have spearheaded state efforts to preempt local democracy. November 8th's election results will likely worsen the situation. The GOP did not just win Washington D.C. on election night; thanks in part to a deluge of corporate-funded outside spending, the party made gains in statehouses across the country.

As a result, half of all U.S. states will be under Republican trifectas in 2017, with GOP control of governorships and both houses of state legislatures (including the unicameral Nebraska).

For example, in Iowa, a state that just elected a GOP trifecta to office, local bans on fracking sand mining operations could be targeted for preempting by ALEC state lawmakers. The Democrats lost majority control of the state senate in November.

Yet not all legislative bodies are willing to preempt local democracy, which is why, as CMD documented, after a flurry of anti-fracking measures nearly missed being placed on the November ballot in Colorado, fossil fuel interests funded Amendment 71, a ballot initiative designed to make it harder for Coloradans to petition their government and amend the state Constitution.

Amendment 71's primary financial support came from the "Protecting Colorado's Environment, Economy, and Energy Independence" PAC, which received $5.38 million from Noble Energy, a fracking operator responsible for 358 oil spills between 2009 and 2011, the most of any oil company operating in the state. It received an additional $6.7 million from Anadarko Petroleum, a fracking company that spent 2016 sending "brand ambassadors" to high schools to speak on the benefits of fracking.

In the end, Amendment 71–a ballot initiative which on its face dealt only with governing process and not energy policy–passed with 55% of the vote after the fracking industry poured millions into the campaign.

Which is why Amendment 71 serves as a perfect symbol of the 2016 elections. As Michael Klare predicted, in order to frack the nation, Big Oil must first buy it.

Klare has detailed what he calls the fossil fuel-funded "third-worldification" of the United States.

Klare warned that the "resource curse" theory, which had been used by academics to describe the political conditions of far-off locales like Nigeria, was coming home to the U.S. with the fracking revolution, and that as a consequence, "the rights and wellbeing of local citizens will be trampled underfoot."

That political transition would not, however, be self-enacting. Klare proposed that to succeed, "Big Oil will have to overcome a host of regulatory and environmental obstacles. It will, in other words, have to use its version of deep-pocket persuasion to convert the United States into the functional equivalent of a Third World petro-state."

The 2016 election was a concrete example of how, as Klare predicted, fracking interests have invested in the state in order to minimize it.

Has American democracy been bought by the frackers? Maybe. At the least, fracking interests appear to be renting it for 2017, and with the prospect of Trump in the White House it remains to be seen what national parks or other resources the regularly bankrupt businessman will seek to sell off to a fracking industry intent on currying favor with him.