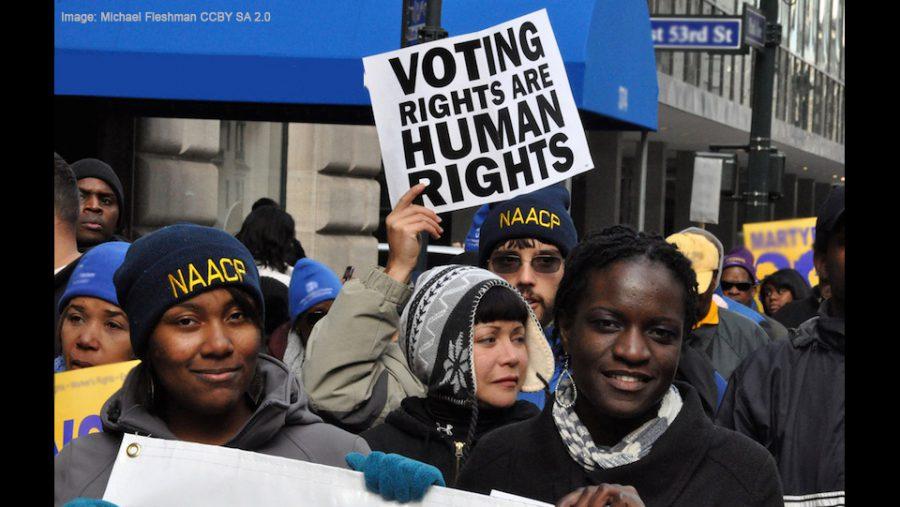 A new study of registered voters in Dane and Milwaukee Counties who did not vote in the 2016 presidential election found that approximately 17,000-23,000 eligible voters in those counties were prevented or deterred from voting by Wisconsin’s voter ID law. Due to financial constraints, the social scientists were only able to do a study of two of Wisconsin’s 72 counties, but the authors say that extrapolating statewide as many as 45,000 people stayed home because of the law.

Donald Trump won the state of Wisconsin by only 22,000 votes, the first GOP presidential victory in the state since Ronald Regan in 1984. The shocking upset garnered national attention and helped deliver the electoral college to Trump as the popular vote went to Clinton.

The study, conducted by Ken Mayer and Michael G. DeCrescenzo, at the University of Wisconsin Department of Political Science, provides definitive evidence that the controversial voter ID bill, passed in 2011 and held up in the courts until 2016, worked precisely as Wisconsin Republicans intended — to make it more difficult for targeted voters to cast their ballots.

Although voter preferences were not included in the study, the survey documents that the burdens of voter ID fell disproportionately on low-income and minority populations considered likely to support Democrats. Among low-income registrants (household income under $25,000), 21.1% were deterred, compared to 7.2% for those whose household income was over $25,000. 8.3% of white registrants were deterred, compared to 27.5% of African Americans.

Roughly 80% of registrants who were deterred from voting by the law, and 77% of those actually prevented from voting, cast ballots in the 2012 election. The number of voters negatively impacted is far greater than the number of “fraud” cases the law was designed to stop. When the law was challenged in federal court and initially ruled a violation of the Voting Rights Act, the state failed to present a single case of voter impersonation that the law would have prevented.

The results prompted the county clerks from Milwaukee and Madison to issue strongly worded statements and a call for a suspension of the voter ID law. “I was shocked by the numbers and am furious to see that Jim Crow laws are  alive and well,” said Milwaukee County Clerk George Christenson.

“The photo ID law must be suspended until changes can be made to restore every voter’s access to the ballot box,” said Dane County Clerk Scott McDonell whose office commissioned the study.

“What I am concerned about here is winning”

While most Republican stuck to the official talking  points that the photo ID law was all about preventing nonexistent “voter fraud,” some forgot the script.

On the night of Wisconsin’s 2016 presidential primary, Republican Congressman Glenn Grothman (R-WI) flatly stated in an interview with WTMJ’s Charles Benson that Wisconsin’s photo ID law would help the GOP win Wisconsin in the November 2016 election.

When asked about the fact that Wisconsin has consistently voted for Democrats in recent presidential elections, Grothman assured Bensen that Democratic front-runner Hillary Clinton was a “weak candidate,” then added “and now we have photo ID, and I think photo ID is gonna make a little bit of a difference as well.”

Rep. Grothman was a State Senator in 2011 when Wisconsin debated and passed its voter ID law, so he was privy to the back room conversations and dealings on the issue.

Those back room conversation came to light five years later when the bill was implemented and people immediately started having problems. Former GOP staffer turned coffee shop owner, Todd Albaugh, was frustrated when one of his employees could not vote in the 2016 spring elections and decided to blow the whistle.

“I was in a closed Senate Republican Caucus when the final round of multiple Voter ID bills were being discussed. A handful of GOP Senators were giddy about the ramifications and literally singled out the prospects of suppressing minority and college voters. Think about that for minute. Elected officials panning and happy to help deny a fellow American’s constitutional right to vote in order to increase their own chances to hang onto power.”

“A vigorous debate on the ideas wasn’t good enough,” said Albaugh “they had to take the coward’s way out and come up with a plan to suppress the vote under the guise of ‘voter fraud.'”

Later on the witness stand in a lawsuit brought by One Wisconsin Now challenging the voter ID law, Albaugh described the tension in closed door caucus as provisions in the bill were being debated.

As described by the Milwaukee Journal Sentinel, Albaugh testified that Committee Chair Sen. Mary Lazich (R-New Berlin) made the case for passing the bill, which made it much harder for students, the elderly and the poor to vote:

“She got up out of her chair and hit her fist or her finger on the table and said, ‘Hey, we’ve got to think about what this would mean for the neighborhoods around Milwaukee and the college campuses,” Allbaugh said.

“Grothman said, ‘What I’m concerned about here is winning, and that’s what really matters here. … We better get this done quickly while we have the opportunity,'” Allbaugh said.

Allbaugh named two other senators — Leah Vukmir and Randy Hopper — as being gleeful over passing the bill.

“They were politically frothing at the mouth,” he said of Vukmir and Hopper, who lost a recall election a few months after the voter ID law passed.

All four of the legislators named by Albaugh were at the time members of the American Legislative Exchange Council (ALEC). Leah Vukmir, described as “frothing at the mouth” over the bill, served for years as an officer of ALEC, was ALEC’s national chairman in 2016, and was given ALEC’s “Iron Woman” Award in 2017.

The Koch-funded American Legislative Exchange Council (ALEC) drafted and approved a “model” “Voter ID Act” in August of 2009. The wave of bills that followed were constructed differently by different GOP legislatures, but have a common purpose to disenfranchise constituencies that are more likely to vote Democratic.

ALEC has attempted to distance itself from this ugly history of voter suppression (it did away with its “Public Safety and Elections Task Force” and no longer touts voter ID as a “model bill”) after sustained campaigning by the online civil rights group Color of Change and others, but ALEC has done nothing to get voter ID policies repealed in the states where its members pushed for and passed the bill.

The partisan motivation behind the Voter ID Act comports with vision of ALEC’s founder, the late Paul Weyrich of Wisconsin, who in 1980 told a group of religious fundamentalists: “I don’t want everybody to vote. Elections are not won by a majority of people, they never have been from the beginning of our country and they are not now. As a matter of fact, our leverage in the elections quite candidly goes up as the voting populace goes down.”