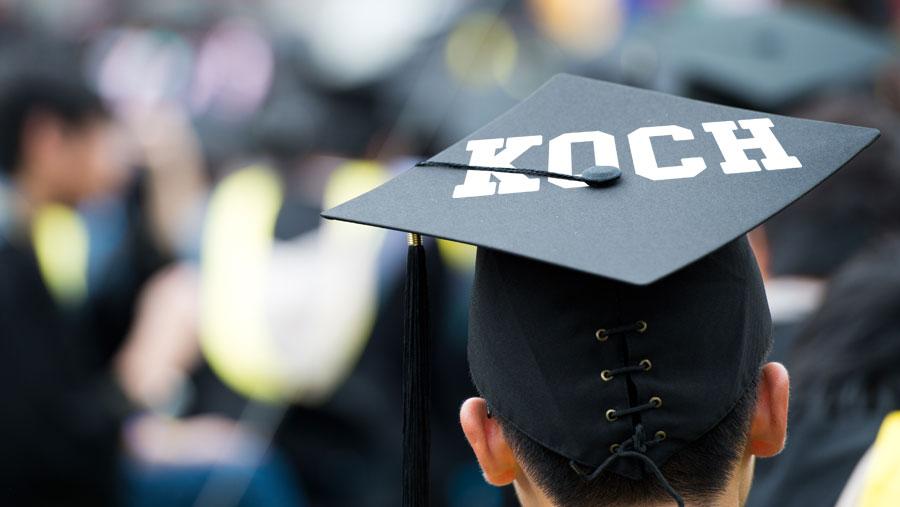 Recently released tax documents (accessible as attachments below) reveal that these donations are ramping up. Two Koch family foundations and one Koch institute gave $33 million to higher education in 2015, the most ever in a single year for the nonprofits and nearly $10 million more than the previous record in 2014.

The Koch Structure of Social Change

New Yorker reporter Jane Mayer found that Koch once urged his wealthy friends to focus on "attracting youth" because "this is the only group that is open to a radically different social philosophy." At a 1976 gathering organized by Koch, writes Mayer, libertarian historian Leonard Liggio, recommended the Nazi authoritarian tactic of creating a youth movement and building group identity. Liggio who went on to become president of the Koch-funded Institute for Humane Studies.

Decades ago, Charles Koch and his right-hand man, Richard Fink, devised a strategy called "The Structure of Social Change," which begins with funding higher education to educate young minds on the benefits of free-market capitalism. Professors and researchers he funds produce policy papers favoring his ideology—tax cuts, deregulation and small government—which Koch-funded think tanks such as the Cato Institute can package into easily digestible policy proposals. Koch-funded advocacy organizations such as his astroturf group "Americans for Prosperity" promote these initiatives to the American people and to legislative bodies. And a web of Koch candidates and policymakers help hasten social change by sponsoring legislation written by the Kochs' favorite corporate bill mill, the American Legislative Exchange Council.

Two other Koch institutions pitch in as well. The Fred and Mary Koch Foundation, directed by the Koch brothers, Charles Koch's wife and Fink, contributes to schools in Kansas, the Kochs' birthplace and home to the Koch Industries headquarters. The Charles Koch Institute, also a nonprofit, also donated to two universities in 2015.

From the indoctrination of young minds, Koch foundations harness what they call a "talent pipeline," funneling students into the Koch "social change" infrastructure, often as professors, think-tank fellows or political operatives. Over decades, the ranks of Koch-funded professors, as well as Koch think-tank and political recruits, have grown significantly.

According to Charles Koch Foundation vice president for higher education Ryan Stowers, the Koch's had a network of 5,000 "scholars" in 2014. The foundation now funds at least 53 free-market academic centers, run by many of these scholars, on college and university campuses around the country

According to this reporter's calculations, the Koch foundations doled out almost $142 million to nearly 400 U.S. colleges and universities from 2005 to 2015.

And the Kochs are paying attention to what their money is buying.

"The Koch Foundation's academic control extends all the way down to approval over graduate fellowship recipients and the content of their dissertation topics, which bodes well for Kochs' 'talent pipeline' but poorly for the integrity of any institution hosting these programs," said Ralph Wilson, co-founder and senior researcher with UnKoch My Campus, an activist group of students and researchers who uncover the details of Koch donations. The group views the donations as obstructing academic freedom and pushing an extreme, rightwing agenda, including climate change denial, into the academic mainstream at hundreds of colleges and universities.

Koch U: George Mason and the Institute for Humane Studies

George Mason University (GMU) is by far the biggest recipient of Koch funding over the years, having received over $95 million from the Charles Koch Foundation from 2005 to 2015 and earning it the title of "Koch U" from investigative reporter Dave Levinthal. A $10 million grant to GMU's law school in 2016, changing its name to honor the late, conservative Supreme Court justice Antonin Scalia, moves that total well over $100 million.

In 2015, the school took in nearly $18 million from the Charles Koch Foundation, including $4.6 million to the Institute for Humane Studies (IHS), a libertarian, on-campus think tank that offers scholarships, faculty funding, seminars, conferences, reading groups and career advice. It used to host the Charles G. Koch Summer Fellow Program. Considerable Koch money funds the GMU economics department and its Law and Economics Center.

IHS, "a haven for climate change deniers," according to Mother Jones, shares an Arlington, Virginia building with the Mercatus Center, another Koch-funded think tank at GMU. Mercatus has Charles Koch and several Koch associates on its board including Fink and Brian Hooks, president of the Charles Koch Foundation.

Mercatus is "'critical' to advancing policy priorities," says Stowers of the Charles Koch Foundation. Koch-funded politicians have cited Mercatus research related to bills they have sponsored, including Republican Rep. Tom Price (R-GA), Donald Trump's nominee to lead the federal Health and Human Services Department. Price and another Koch-funded representative teamed up in 2015 to oust the director of the Congressional Budget Office, replacing him with a former Mercatus research fellow. Other Mercatus fellows have held, or have been nominated for, federal government posts.

Other Universities Receiving More than $1 Million in Koch Funding

Three more universities took in over $1 million from the Charles Koch Foundation in 2015, while many others received over $500,000 a piece. At most of these institutions, Koch has played an important role in founding free-market academic centers, and in some cases such as at Florida State, his foundation has been closely involved in hiring decisions and course development.

"Charles Koch is doubling down on the multi-million dollar money dumps that buy him real control over professors," said Connor Gibson, a co-founder of UnKoch My Campus. "He has privatized dozens of economics and business departments that now preclude critical inquiry if it challenges the donor's personal ideology. Students can expect to pay more and learn less."

In 2015, Texas Tech scored more than $2 million from the Charles Koch Foundation, which bankrolls the school's Free Market Institute, a privately funded think tank that also managed to siphon $1.4 million of public money from a state incentives program.

Its director, sweatshop defender Benjamin Powell, got his doctorate from GMU and is on the executive committee of the Association of Private Enterprise Education, an organization financed in part by Koch that holds annual gatherings where Koch-funded professors, think-tank researchers and private industry representatives share strategies for founding and expanding free-market programs at colleges and universities. The Institute's board includes several Koch-linked professors from other schools including Peter Boettke of GMU, who's been a visiting scholar at the Free Market Institute and has been featuring at the Institute's "Weekend Exploring Liberty," cohosted by IHS.

"Evidence of an enduring impact from this research could include observing free-market think tanks change their strategy of promoting social change to more closely mirror the findings of our research," wrote Powell in a grant application to another private funder. "Other evidence may include pro-freedom policy makers changing their strategies to mirror the findings of our research."

The Charles Koch Foundation also funds Texas Tech's Institute for the Study of Western Civilization, which co-hosted an event with the right-wing, Koch-funded Texas Public Policy Foundation that presented a panel featuring the Koch Foundation's director of university relations and the deputy director of the Koch-funded Center for the Philosophy of Freedom at the University of Arizona.

The Texas Observer reported that the Koch Foundation made a $7.7 million long-term commitment to Texas Tech in 2016, causing significant outcry from faculty and students.

Utah State University collected over $1.3 million from the Charles Koch Foundation and the Charles Koch Institute in 2015. The foundation supports tenure-track professors at the business school's its Institute of Political Economy and has donated heavily to a new addition to the school. Current faculty at the Institute include Chris Fawson, who is on leave and working at the Koch Foundation "on business school and faculty research initiatives sponsored by the Foundation"; Randy Simmons, director of the Institute, who is also a fellow at the Koch-funded Property and Environmental Research Center and a scholar at the climate-change-denying, Koch-backed Competitive Enterprise Institute; two others who received their PhDs from GMU; and another who has taught there. The Charles Koch Foundation also offers a paid Koch scholar program, a Koch associates program and Koch internships through the school of business.

In 2015, $335,000 went to Strata Policy—an affiliate of the Institute of Political Economy run by three Utah State professors, including the Institute's Simmons—employs student researchers, co-hosts events with the Charles Koch Institute and lists the Koch scholars program on its website. The center initially worked out of Utah State office space, and its founders incorporated it in 2012.

University of Texas at Austin

UT Austin raked in close to $1.4 million for its Center for Politics in Government. Its director, Ryan Streeter, was deputy chief of staff for then-Governor of Indiana Mike Pence, a favorite politician of the Kochs. This center's associate director of research earned her PhD in economics from GMU and was a fellow at the Mercatus Center, and the director of communications was once deputy finance director to former Texas governor Rick Perry, who has received significant political donations from David Koch and Koch Industries.

In addition, Internal Revenue Service reports show that several other schools got more than half a million dollars from the Charles Koch Foundation in 2015; at most of these institutions, Koch has funded at least one economics or regulatory center.

Other Koch investments in higher education can be accessed at the table below.

The Kochs' higher education donations consistently raise the eyebrows of students, faculty and community members, as Koch leads a huge, ideological political network that rivals both major parties in terms of funding. But activists on many campuses are exposing this funding stream, and they are beginning to successfully convince universities to reject Koch money or sever ties with Koch-funded think tanks.

Alex Kotch is an independent investigative journalist. This article is published exclusively with the Center for Media and Democracy.

The Kochs are buying entire departments at some schools so those depts. can turn out Koch ideology in the form of "research" that supports those Koch ideas, and only Koch ideas. That astroturf research can then be pointed to by free-market politicians, as noted. The Koch money at a university is able to get professors with opposing views fired, or so I've read several times. This is not as much about donating to a university as it's about creating astroturf where grassroots support is lacking. Ramping up the talent pool is the same talking point big business uses to denigrate both high schools and universities. "We can't find any qualified candidates to hire". They want to be able to use the visa system to bring in tech people and others whom they pay less than they'd have to pay qualified US tech professionals. The tech industry is notorious for the visa ploy. It saves them money, which means more in profit. Meanwhile, qualified US tech grads can't find good jobs!