One of the Koch Family-Controlled Foundations Has Quietly Folded 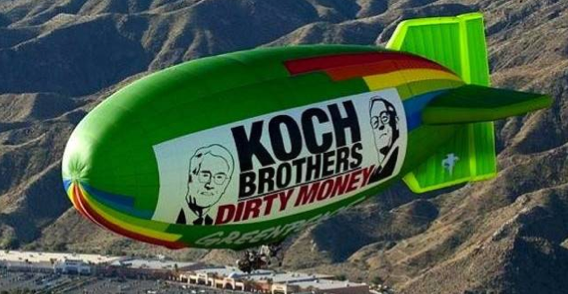 The Koch family-controlled Claude R. Lambe Foundation (CRLF), one of the routine sources of funding for right wing groups for more than thirty years has dissolved, further limiting what little is publicly known of which groups seeking to change Americans' rights receive money controlled or directed by Charles and David Koch and their operatives.

The foundation formally dissolved in 2013, according to documents filed with the IRS in February 2014 and obtained this month by CMD.

Koch Industries magnate Charles Koch created the foundation in Wichita in the early 1980s with funds from the estate of his friend Claude Lambe. For the past three decades, CRLF has often spent millions annually to provide a regular infusion of cash for groups pushing the agenda favored by Koch. This includes millions of dollars, cumulatively, provided to the American Legislative Exchange Council (ALEC), the Heritage Foundation, the Federalist Society and some state-based think tanks operating under the State Policy Network (SPN) banner. Greenpeace has calculated that CRLF provided $24,643,414 to groups peddling climate change denial between 1997-2011.

CMD released a major report on SPN in 2013 which detailed the Koch funding of that network. "At least 13 SPN think tanks, not including SPN itself or SPN associate members, have received funding directly from the Koch-controlled foundations," the report noted. Much of this money was via the CRLF. This report is available here: The Powerful Right-Wing Network Helping to Hijack State Politics and Government.

The political activities of the Koch brothers have been under growing scrutiny over the past few years. The millions of dollars in grants made via the Koch family-controlled foundations – such as CRLF – are subject to public disclosure under the IRS rules. Since little is known about which politically active groups the Kochs support through personal checks or through Koch Industries itself (as a closely held corporation) or its subsidiaries, IRS filings from their foundations have been the primary – if limited – window into which groups trying to change U.S. laws or affect U.S. elections they underwrite.

Just the Tip of a Very Large Iceberg

As CMD has documented, the Koch brothers have provided significant secret funding to right wing groups from their personal accounts and through corporate contributions. Details of this funding have only become widely known when documents from recipients revealing such funding enter the public domain. From one such document, CMD discovered that the Texas Public Policy Foundation received $159,834 directly from Koch Industries in 2010, more than double the $69,788.61 it received from CRLF that year.

Only the grant from CRLF was required to be disclosed. Without that document surfacing, the public would not know that even more Koch-family controlled money was secretly underwriting that "think tank" that was peddling controversial policies. The total amount of money that Koch Industries has used to underwrite such groups, including ALEC, is not fully known.

The National Journal also reported in September 2013 that David Koch himself had provided a $850,000 personal check to the Americans for Prosperity Foundation in 2003. Similarly, CMD reported that David Koch provided the Massachusetts SPN think tank Pioneer Institute, with a $125,000 personal check in 2007. Both of these documents were public, although unexpectedly so.

As seems likely, if the Koch brothers, both individually and through Koch Industries, are making similar grants elsewhere, then the size and scope of their influence has been significantly underestimated. The likely impact of CRLF's closing, even if what it demonstrates is just the tip of a very large iceberg, will be that the public knows even less about the Koch brothers' political spending. The foundation closed by transferring more than $2 million to an unspecified "donor-advised fund" within the Fidelity Investments Charitable Gift Fund, to be distributed at the direction of whomever controls that donor-advised fund.

CMD's Jacob Steiner contributed to this report. Nick Surgey is the Research Director for the Center for Media and Democracy, which has joined forces with The Progressive Inc.