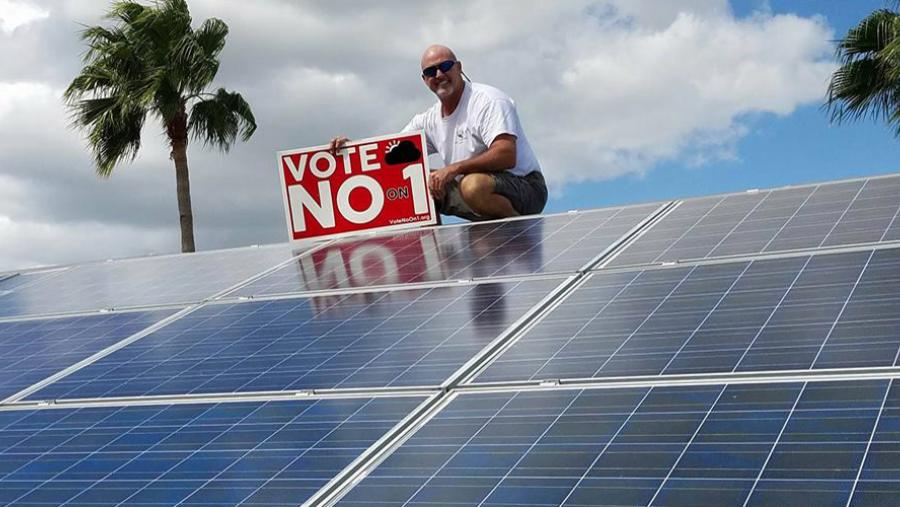 Ballot measures across the country passed on November 8th highlighting the fact that progressive values still resonate with the U.S. electorate. Gains were made even in the face of industry deception and big dollar ad campaigns.

In a victory for climate activists and solar energy, Floridians voted down Amendment 1, a constitutional amendment which would have made it hard for people with solar panels to sell energy back to the grid.

Leaked audio, obtained by the Center for Media and Democracy and the Energy and Policy Institute two weeks before the election, showed that Florida utilities and their allies sought to deceive the public into believing that Amendment 1 was pro-solar. The tapes made front page news across the state and Florida editorial boards weighed in, but as the amendment was very deceptively worded environmentalists were worried. In the end, voters rejected the amendment 50.8 to 49.2, a big defeat since the threshold to amend the constitution is 60 percent. Floridians for Solar Choice worked hard to expose the deception and turn out voters in opposition.

In California, voters statewide said good bye to plastic bags with the passage of Proposition 67 by an overwhelming margin of 62-48. The statewide ban on the use of plastic bags went into effect immediately following the election; grocery stores, retail stores with a pharmacy, convenience stores, food marts and liquor stores will no longer provide single-use plastic carry-out bags to customers. A recycled paper bag will be provided for 10 cents extra if you forget reusuable bags. California's statewide ban built on popular local measures. The plastics industry is fighting back against such local democracy measures. A bill to preempt localities from banning plastic bags is an American Legislative Exchange Council model bill.

South Dakotans passed Initiated Measure 22 52-48, a statewide ballot referendum, that cracks down on dark money and phony industry front groups by barring candidate coordination with outside groups and regulating independent expenditures. This model will be one to emulate, see CMD's previous report on this.

California voters passed Proposition 59 52-48, which calls for California to propose an amendment to overturn the 2010 Supreme Court of the United States Citizens United vs. FEC decision that got rid of limits on "independent" political spending and opened the floodgates for billions in dark money into elections nationwide. Voters in Washington approved Initiative 735 with a strong majority 63-37, in a similar state-wide ballot measure. And down-ballot, 21 communities in Ohio and Wisconsin passed similar resolutions, see Move to Amend for more information.

In the states of Arizona, Colorado, and Maine, citizens voted to approve ballot measures that will phase in a $12 an hour minimum wage by 2020. Voters in the state of Washington supported even a higher minimum wage in approving a measure that will raise it to $13.50 per hour by 2020.

In addition to voting to raise the minimum wage, Arizonans also passed a measure 59-41 that will establish the right to paid sick leave. For every 30 hours worked, an employee will now be able to receive 1 hour of paid time off. Valid reasons for using this paid time off include: "mental or physical illness, care of a family member, a public health emergency, or absence due to domestic violence."

In Massachusetts, voters sent a resounding NO to a referendum that proposed to expand the number of charter schools operating in the state by 12 every year with a 62-38 vote. The nation's most expensive ballot campaign resulted in a crushing defeat for Question 2 and charter school advocates reports the Boston Globe.

In a strong statement in support of democracy and public schools, Georgia voters overwhelmingly rejected Amendment 1, 60-40, that would have allowed the state to intervene in "chronically failing public schools in order to improve student performance." This ALEC-style measure would have ultimately reduced the amount of control local communities have over their school districts.

In the bad news column, an oil and gas industry fueled campaign made it much more difficult to amend the state constitution in Colorado with 56-44 of voters supporting Amendment 71. The oil and gas industry is trying to fight off proposed restrictions on fracking by making it much more expensive and difficult for citizen groups to put measures on the ballot and in the state constitution. See CMD's report on Amendment 71 here.