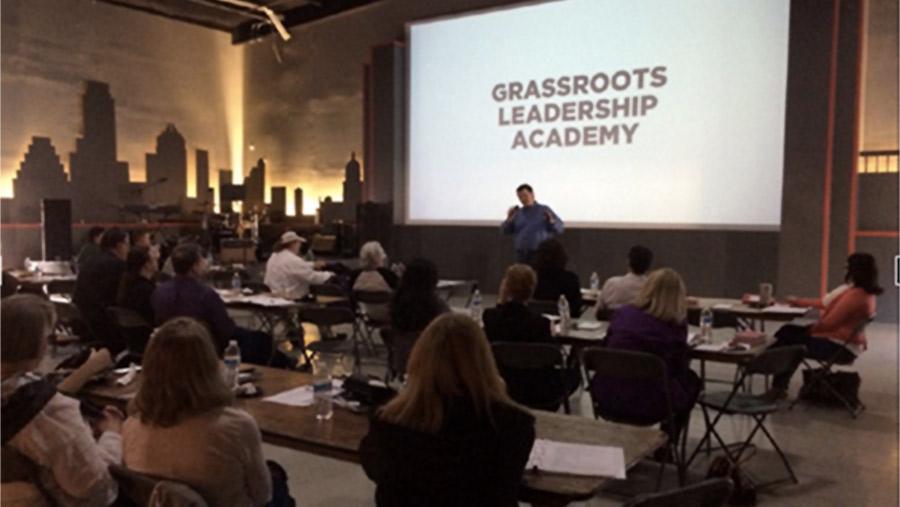 With no clear favorite in the 2016 U.S. presidential primary race--following Gov. Scott Walker's early exit and Trump's march toward the nomination--the Koch brothers have turned their attention (and opened their wallets) to races for the U.S. Senate, U.S. House, and state governorships.

But with the Kochs having already spent at least $400 million of $889 million committed to the 2016 election cycle, according to news reports, where is that money being spent?

An under-covered arm of the Koch political operations is a likely recipient of some of that cash and it's called Americans for Prosperity's "Grassroots Leadership Academy."

The Republican Party has long been disadvantaged in the electoral ground game. It does not have as many community-based institutions to knock on doors and pass out literature as the Democratic Party, which enjoys broad backing from unions and other community-based organizations.

This is why the Kochs built the multi-million dollar political operation, Americans for Prosperity (AFP), which spends millions on phony "issue ads" in the election cycle and also recruits the Kochs' "grassroots."

AFP's budget--which has come from Koch foundations, the Koch personal fortune, and Koch billionaire allies in their Freedom Partners alliance--surged from $7 million in 2007 to $40 million in 2010 to $122 million in 2012. In the 2012 election cycle, it was a key component of the Kochs' estimated $400 million political network, receiving large portions of its money from the Kochs' Freedom Partners and the Koch-linked American Encore (previously known as the Center to Protect Patient Rights) and Donors Trust.

AFP has in the past parachuted in grassroots-like operations when Koch-backed candidates needed their help to win.

But after the Kochs failed to unseat President Obama in 2012, they decided to augment their ad wars with a much more significant multi-state ground game that includes a large and sophisticated voter dataset, micro-targeting, and a cadre of boots on the ground.

"One of the biggest things we learned and shared with our investors is that we can't parachute in the last couple months of an election cycle with a bunch of activists into a new state and expect to have the same impact that President Obama had by staying in those states for four years and being invested in the community," Marc Short, the former president of the Kochs' Freedom Partners operation, told the Washington Post last year.

The Kochs are building a voters list with so much detail it is outstripping the RNC's ability to keep up. The company i360, which Freedom Partners is investing in according to Politico, is in charge of building this list and deploying voter micro-targeting.

The Grassroots Leadership Academy (GLA) is the new boot camp for the AFP ground game. Its mission, as stated on its website, is to develop the leadership skills needed "to fight for freedom and against the progressive policies and false narratives of the left" through its three-step educational program.

Most of the training sessions are held at local AFP offices, which it has opened in 35 states. Participants can get a certificate for becoming a Koch community organizer.

The first two programs, which can earn one a "grassroots activist" or a "community mobilizer" certificate, conduct classes one night a week for six weeks.

Course titles include "Making the Case for Economic Freedom," "Sharing Freedom by Telling Your Story," and "Narratives & Framing-the Key to Connecting," among others.

The final step of the program is an "intensive bootcamp" on what it takes to become a right-wing grassroots leader. The bootcamps are held in Washington, D.C., Dallas, TX, or Las Vegas, NV.

It's not clear who, if any, of the certified Koch "grassroots" organizers get tapped for paid positions to advance the Koch political campaign operations.

Although it is unclear exactly how many right-wing activists and leaders GLA has graduated, the Center for Media and Democracy has discovered that the school has held (or scheduled) a whopping 116 training sessions in 26 states across the country since September of 2015, and it is adding more daily. AFP claims to have over 2.8 million individuals mobilized in its network nationwide.

According to an AFP document leaked to Progress Now entitled "Winter 2015 Partner Prospectus," there are six states where the number of activists totals over 100,000: California, Texas, Wisconsin, Pennsylvania, North Carolina, and Florida.

States Where Koch "Grassroots" Are Being Mobilized 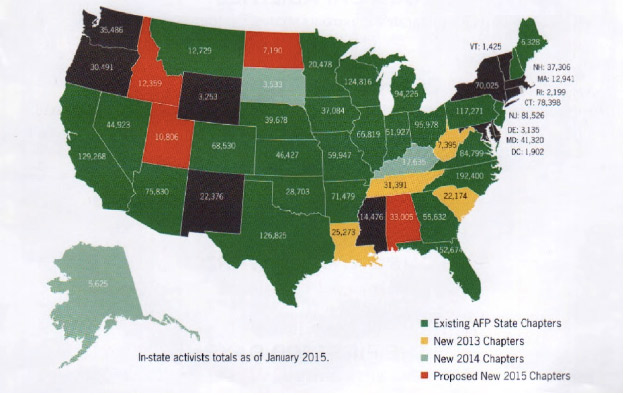 As the 2016 elections are fully underway, many of these rightwing activists are already out on the streets, iPads in hand, i360 apps open, knocking on doors in an attempt to mobilize Republican or independent voters. The i360 Walk app for iOS and Android provides the AFP army with voter information on the go so they can identify houses strategically and make use of their time efficiently.

i360 states on its website that its database includes "quality" information on over 250 million 18+ adults nationwide. Most importantly for AFP canvassers, the database details the political leanings of 190 million registered voters.

Since the 2010 census counted 234 million Americans who were 18 or older, the Koch/i360 operation purports to have data on almost every adult living in the U.S., whether they have ever registered to vote or not.

But where are these rightwing foot soldiers and what do their activities say about the Kochs' interests in the 2016 election cycle?

A closer look at the the GLA training sessions is insightful.

The most GLA training sessions have been in scheduled in North Carolina where 12 classes of activists and mobilizers will have graduated by the end of June. Following North Carolina, is Florida with 11, Iowa with 8, and Nevada, Ohio, and Wisconsin with 7 a piece.

The 2016 Koch candidates are already identifiable in numerous states. Here is a sampling:

The Kochs are heavily invested in North Carolina having held (or scheduled) 12 GLA training sessions and with close to 200,000 AFP "in-state activists" as of January 2015.

In the race for governor, incumbent Gov. Pat McCrory (R) is likely their man.

When he ran for office in 2012, AFP contributed $130,000 to his campaign. And after getting sworn in, McCrory made longtime Koch operative Art Pope his budget director for his first year and a half in office. (Pope has also spent time on AFP's board.)

More recently, AFP took out a six digit ad buy in the fall of 2015 praising the Governor for cutting personal and corporate tax rates.

The Kochs are also supporting the following incumbents in their 2016 reelection bids as the Koch Industries Koch PAC contributions indicate: Sen. Richard Burr (R-NC), Rep. Richard Hudson (NC-08), Rep. George Holding (NC-13), who is retiring from his current seat to run in the 2nd District, and Rep. Patrick McHenry (NC-10).

The Kochs have spent massive amounts of cash to the tune of $44 million in Wisconsin over the years to back Governor Scott Walker, his GOP majority in the Senate and Assembly and otherwise secure their interests in the state. (See this detailed report.) They have held (or scheduled) seven GLA training sessions since March of this year and claim to have close to 125,000 in-state trained supporters.

The Kochs' are big backers of Sen. Ron Johnson (R-WI) who is running for reelection against former Sen. Russ Feingold.

Johnson is endorsed by Aegis Strategic, a Koch political consulting firm and Aegis PAC. He received donations from Aegis PAC for $34,400 in 2015-2016. Koch Industries' Rich Fink, the Koch Brothers' top political advisor, has donated to Johnson.

AFP has also rolled out a $1.1 million campaign in support of Johnson. They bought a TV spot and will support a door knocking campaign--likely with GLA graduates--in La Crosse, Waukesha, and Milwaukee.

Freedom Partners' latest attack on Feingold was so misleading it was taken down by three TV stations, a rare occurrence in today's no-holds-barred world.

The Kochs are also backing the gaffe-prone Rep. Glenn Grothman (WI-06) in his bid for reelection. Grothman, who famously claimed women earn less because money was less important to them, is an alumnus of the Koch-funded American Legislative Exchange Council, where he was listed as participating in the Education Task Force and the International Relations Task Force, as CMD documented.

The seven GLA training school courses held in Nevada since October 2015 are likely due to the U.S. Senate seat that will be vacated by retiring Senate Minority Leader Harry Reid (D-NV). Koch-favorite Rep. Joe Heck (R-NV) is seeking to turn this seat--that has been held by Democrats since 1987--red.

As CMD has previously reported, "Koch Industries has been one of Rep. Heck's top contributors throughout his career, and Heck voted with Koch-held positions nearly 90 percent of the time in 2015. In 2014, AFP ran a $200,000 advertisement in support of Heck."

The Koch front group, Concerned Veterans for America (CVA) has been placing ads supporting Heck with a $700,000 broadcast and digital ad buy.

Like Nevada, the seven GLA training sessions conducted across Ohio since September 2015 seem organized to make sure the U.S. Senate remains in Republican control by defeating former Governor Ted Strickland in his race to unseat incumbent Sen. Rob Portman (R-OH).

The Kochs have already donated over $10,000 to Portman's campaign. Freedom Partners Action Fund took out a $2 million TV and digital ad buy criticizing Strickland's tax and spending policies as governor.

The Kochs are also backing Rep. Jim Renacci (OH-16) in his bid for a second term. According to the Sierra Club, Renacci supported tax subsidies to big oil four times, then claimed they didn't exist.

Florida has hosted eleven GLA training school courses since September of 2015 and claims more than 150,000 in-state activists, which suggests that the Kochs are poised to be heavily involved in the sunshine state in 2016.

Not only is it a key swing state in the presidential election, there are 27 U.S. House seats being contested for in Florida plus one in the U.S. Senate.

However, the down-ticket Koch candidates who will be the beneficiaries of this Koch investment have not yet emerged. However, Koch support seems U.S. Rep. Ron DeSantis's run for U.S. Senate seems likely. DeSantis has out-raised his opponents in the Republican primary and has received endorsements from the Senate Conservatives Fund and Club for Growth, a group often linked to the Kochs nationally and through its similarly named allies in the states.

GLA has held eight of its activist training programs in Iowa since January of this year. With four seats in the U.S. House and one U.S. Senate seat to be contested, it is probably that the Kochs will unleash their newly-minted activists soon, although the Koch candidates that will receive the benefit of this investment have not yet emerged--from the standpoint, for example, of ads by Koch-aligned groups around a particular campaign.

GLA will likely intensify its training efforts in other states as more primaries are held.

How big will the Kochs' investment in this astroturf army become? How effective will billionaire-backed grassroots be? Stay tuned.