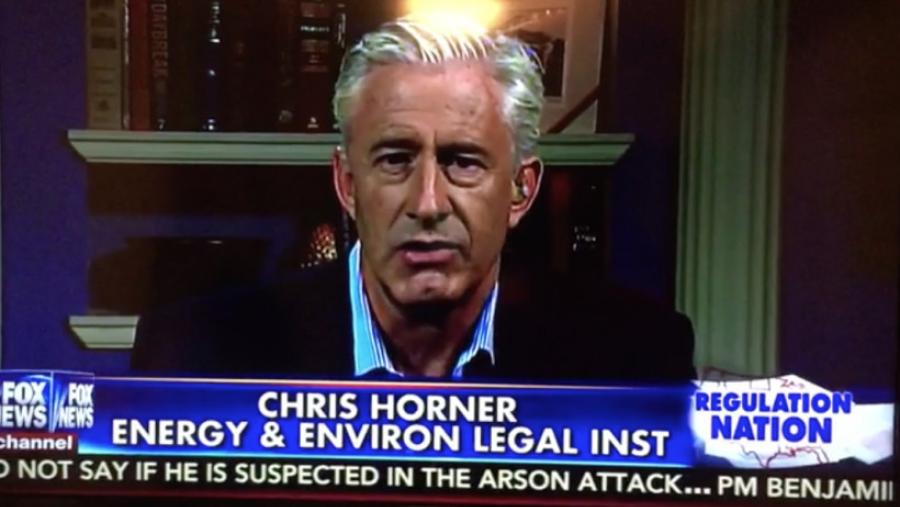 Chris Horner, a DC-based lawyer, climate change denier and Fox News regular, is also being paid as a "Regulatory Counsel" for the coal company, Alpha Natural Resources, according to bankruptcy filings reviewed by the Center for Media and Democracy (CMD). Horner’s repeated filing of lawsuits against leading U.S. climate scientists has been described as "harassment."

Alpha funding for Horner was first reported by Lee Fang, writing for the Intercept in August 2015 from earlier bankruptcy filings, although his role as Counsel was unknown until now.

Horner's role as Regulatory Counsel for Alpha is described in a declaration that he signed, and which was filed with the bankruptcy court on January 11, 2016. Another document shows that funding from Alpha to Horner has continued through to at least the end of January, 2016, which is the most recent reporting period.

As the Wall Street Journal has reported, Horner was paid a total of $18,600 by Alpha for the months of May, June and July 2015. More recent filings reviewed by CMD show that he has subsequently been paid at least $12,000 more since then, taking the total amount to at least $30,600 for the nine month period between May 2015 and Jan 2016.

With the U.S. coal industry increasingly collapsing, coal company bankruptcy filings are now revealing what has long been suspected but not proven: that leading climate change deniers and many of the biggest defenders of coal, are funded by the industry that they are working to protect.

CMD recently revealed that another coal company filing for bankruptcy, Arch Coal, has provided funding to the Energy & Environment Legal Institute (E&E Legal), where Chris Horner is also a Senior Legal Fellow. Both Arch and Alpha also fund the American Legislative Exchange Council (ALEC), another climate change denial group, in which Horner has participated for many years. ALEC has been instrumental in trying to block action to implement the Obama-administration's Clean Power Plan at the state level. The Clean Power Plan is currently on hold, pending review by the Court of Appeals.

Through E&E Legal, Horner has filed countless public record requests with climate scientists working at state universities and other public bodies--requests that typically demand unpublished research and personal emails. When the scientists don't hand over everything, lawsuits are filed and years of litigation begins, distracting from actual climate research.

In his bio, Horner doesn't mention Alpha or any other coal company, although he does list the Competitive Enterprise Institute (CEI), "scientists," and members of the U.S. House of Representatives and U.S. Senate as all being past or current clients.

In addition to his role working for Alpha, whatever it is he does in that role, Chris Horner is an illustrative example of how the coal industry has spread funding to myriad groups, giving the impression of a broad cast of characters for its climate denial performance. In reality its a relatively small group of actors performing all the roles.

This is what is known to date about Horner's work with groups funded by the coal industry:

As CMD has previously reported, Horner was a speaker at a 2015 private and highly secretive annual coal summit, organized by five coal companies, including Arch Coal and Alpha Natural Resources, as well as Alliance Resource Partners, Drummond Company, and United Coal Company.

CMD was provided with a copy of an email sent to attendees after the event.

The note, signed by the CEOs of all five coal companies, suggests each of them may be funding Horner. It said: "As the 'war on coal' continues, I trust that the commitment we have made to support Chris Horner's work will eventually create greater awareness of the illegal tactics being employed to pass laws that are intended to destroy our industry."

Peabody Energy, described as the largest coal company in the world, is the next coal giant facing bankruptcy. The price of Peabody stock has dropped 97% over the past year and it recently warned its investors that it may seek bankruptcy protections from creditors.