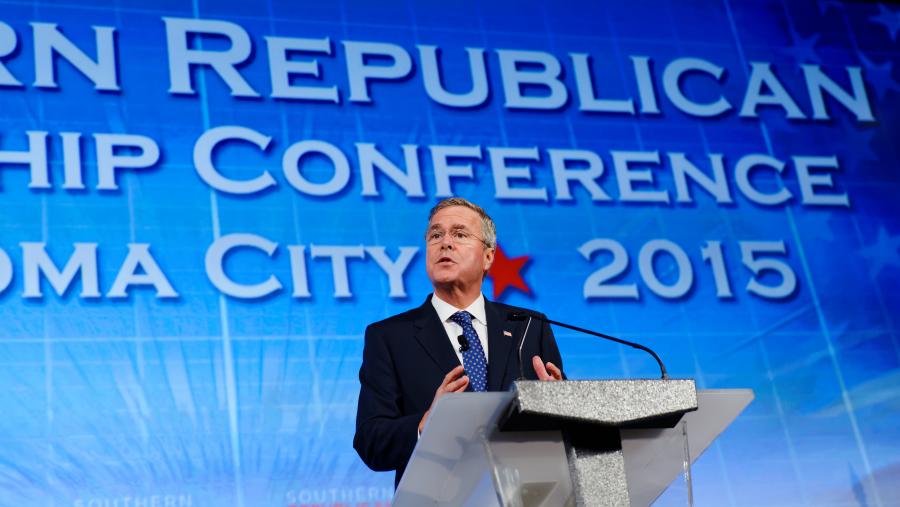 Jeb Bush is the highest profile speaker at a secretive three-day retreat in Bristol, Virginia, hosted by the CEOs of six coal companies, according to materials for the invitation-only event obtained by the Center for Media and Democracy (CMD) and shared with the Guardian.

The event, dubbed the "Coal & Investment Leadership Forum," which started Sunday and goes through Tuesday, is taking place at an exclusive private golf course and resort called the "Olde Farm," owned by the founder of United Coal Company, Jim McGlothlin. The private country club is known for its annual golf tournament in which players take sides in the Civil War for the South or the Union and which is described by McGlothlin as "our most cherished tradition."

In addition to United Coal, the forum is being hosted by the CEOs of five other coal companies: Alliance Resource Partners, Alpha Natural Resources, Consol Energy, Drummond Company, and Arch Coal.

Bush is the only candidate expected to run for the 2016 presidential election speaking at the event.

The materials don't say what Bush will be speaking about, but in a room of coal industry executives and potential major Bush campaign funders, climate change and proposed cuts in carbon emissions are sure to dominate the conversation.

The purpose of the event was outlined in a letter from the coal hosts to invitees: "Our industry needs to keep a loud voice with top representatives of our government."

Having long bemoaned of a "war on coal," facing massive losses in share value, and the likely closure of many coal plants under the Clean Power Plan, the coal industry must be looking to Jeb Bush as a potential ally.

"It would be our hope that he would touch upon his general energy policies," McGlothlin told the Guardian's Suzanne Goldenberg.

Bush has long been considered a climate change denier.

In 2009 he told Esquire: "I'm a skeptic. I'm not a scientist. I think the science has been politicized."

Speaking at a May 2015 fundraising event in New Hampshire, Bush said that it would be "arrogant" to say that the science on climate change is settled.

Despite Bush's claims, which appear to pander to the same dirty energy his family made a fortune in, there is overwhelming scientific consensus that the climate is changing because of human activities.

Fully 97% of peer reviewed scientific papers on the topic are in agreement on this, as are the U.S. National Academy of Sciences, NASA, the American Medical Association and countless other bodies of scientific thought.

Just four speakers--including Bush--are scheduled to present over the three days, with most of the time set aside for less formal interactions: "significant time will also be available for golf, fly fishing, one-on-one meetings and small VIP discussion groups, which is the hallmark of this conference," boasts the invitation.

Murray Energy CEO Robert Murray will also be in attendance, according to reporting by SNL. Murray made news in 2012 when he forced workers at one of his mines in Ohio to attend a Mitt Romney campaign event, closing the mine for the day and docking the miners' wages. Murray reportedly hasn't yet decided who he will be supporting in the upcoming Republican primaries.

Senator Mitch McConnell had been one of the potential speakers but apparently was not able to make the event.

Chris Horner, a lawyer from the coal-industry funded Competitive Enterprise Institute will present on the final day. Horner is also a lawyer for Energy & Environment Legal Institute (formally known as "American Tradition Institute").

This is the fourth year the coal companies have held this event, but none of the previous events received any media reporting. It is not known if Jeb Bush attended the previous events because the organizers bar the press from hearing what policymakers promise the coal barons who attend the event.

Are there any Solar Panel or Battery "barons" Or maybe a Windmill Baroness?