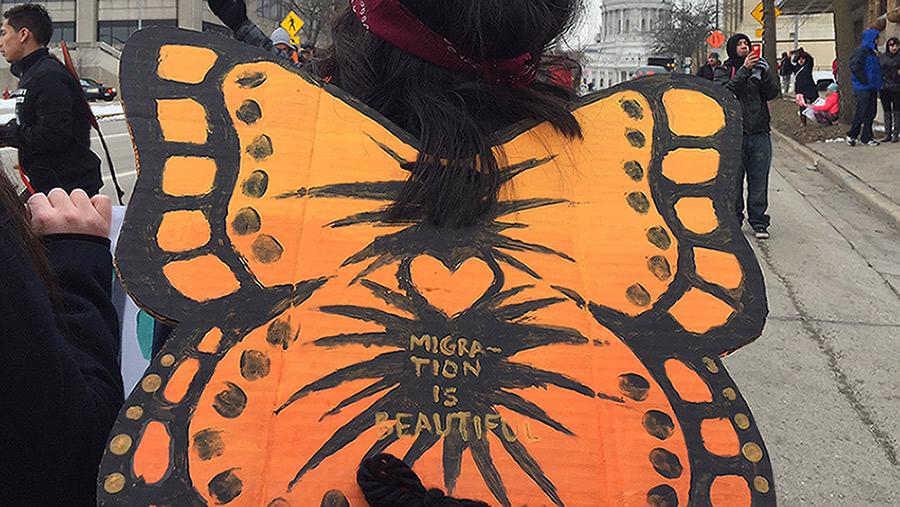 Latino families, friends, supporters and business owners took to the streets surrounding Madison’s Capitol today to protest a pair of anti-immigration bills being fast-tracked in the GOP-controlled legislature. 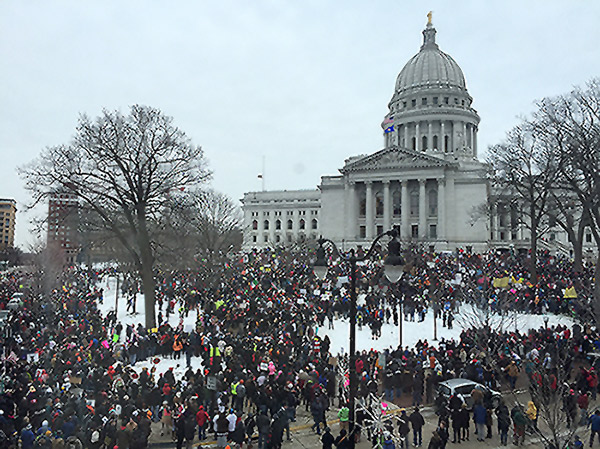 The crowd was so large, organizer Christine Neumann-Ortiz could barely contain her excitement, declaring from the stage "This is a great day!"

Protesters came in from all over the state: Marshall, Waukesha, Fond du Lac, Sheboygan, Green Bay, and Milwaukee to declare that Wisconsin is NOT Arizona.

Wisconsin is the latest state to try crushing local protections for immigrant rights.

Across the country, with help from groups like the Koch-funded American Legislative Exchange Council (ALEC), right-wing state lawmakers have increasingly been turning to state "preemption" measures to override an array of progressive policy gains at the city or county level. At issue in Wisconsin are two bills--one blocks local "sanctuary city" policies and forces cities to enforce federal immigration law. Another bill overrides Milwaukee's ordinance providing local identification cards to people who cannot access a state issued IDs.

"These bills are being driven by politicians aligned with the American Legislative Exchange Council (ALEC) in an attempt to preempt local control and continue the shameful legacy of criminalization of immigrant workers and their families," said Neumann-Ortiz, director of the immigrant rights group Voces de La Frontera.

Wisconsin's AB 450/SB 369, contains elements of ALEC's "No Sanctuary Cities for Illegal Immigrants Act," which was later introduced in Arizona as SB 1070. The ALEC task force that approved the "No Sanctuary Cities for Illegal Immigrants Act" in December 2009 included a lobbyist for Corrections Corporation of America (CCA), which had identified immigrant detention as a profit center important for its future growth (CCA claims it did not vote on the legislation as ALEC corporate members typically do). 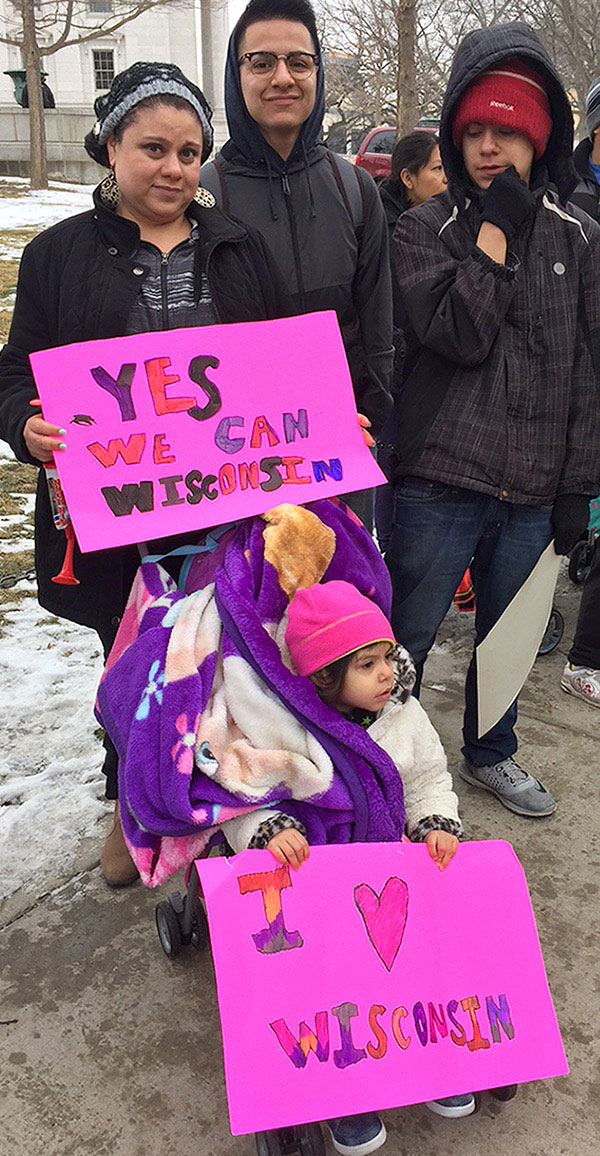 A few months later the "No Sanctuary Cities for Illegal Immigrants Act" was introduced in Arizona as SB 1070. Controversy over the bill led to a boycott of Arizona and the historic recall of the bill's sponsor, Arizona Senate President Russell Pearce in 2011. The defeat of Pearce was seen as a major defeat for the Tea Party nationally and the legislation was later struck down in part by the U.S. Supreme Court.

The other bill, SB 533/AB 723, would block cities and counties statewide from issuing local identification cards. SB 533 was introduced by ALEC Senators Wanggaard and LeMahieu.

Tens of thousands of Milwaukee residents cannot obtain a Wisconsin identification card—particularly immigrants and the homeless–thanks to strict eligibility barriers enacted in 2007. It means that many people can’t participate in basic parts of civic life, from opening bank accounts, to picking up prescriptions, to visiting a child at school, and creates problems for domestic violence victims, since they need an ID to notarize divorce documents or other materials.

Thanks to the work of a coalition of immigrant rights groups, domestic violence advocates, LGBT organizations, and others, last November the City of Milwaukee and Milwaukee County joined several other cities across the country in providing municipal ID cards for all residents. The cards cannot be used for voting in this "Voter ID" state.

"The Milwaukee ID program is a great example of a local government responding to grass-roots voices and stepping in to provide basic services to constituents when the state and federal government have failed to do so," said Neumann-Ortiz.

So the ALEC legislators introduced SB 533/AB 723 to crush it.

"At one time, Republicans claimed to be in favor of home rule and local control, but this bill flies in the face of those principles, and show how anti-immigrant sentiment in the GOP isn't at all limited to Trump," Neumann-Ortiz said. "This bill is inspired by hate." 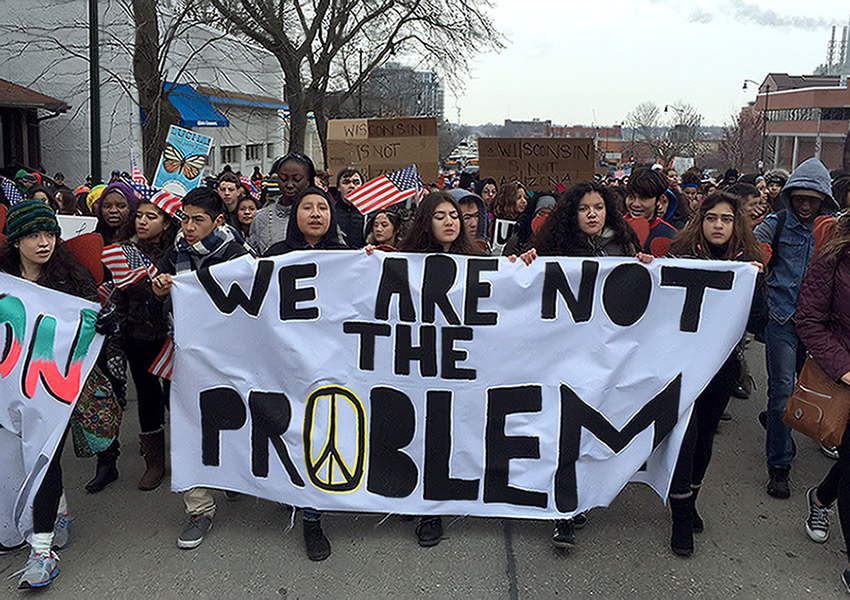 Students from East High School marched to the capitol, chanting "We are the Migrants, the Mighty Mighty Migrants!" Many wore butterfly wings, "because butterflies represent a natural migration," said one young person sporting wings and a smile.

Scores of businesses participated in Thursday’s march. Ernesto Villareal, who owns a large grocery in Milwaukee, closed up shop and joined many of 450 employees at the protest in Madison. "We need Hispanics," said Villareal, "and we need these people to work."

Other businesses fretted about the loss of Latino workers. The Milwaukee Journal Sentinel carried a front page article detailing how important Latinos were to certain large dairy operations in the state. 40 percent of state dairy workers are immigrants.

Workers from many different professions and jobs were at the mass rally on Thursday. Hundreds of workers from Herbalife were there and were excited to tell CMD, "We're closed for the first time, ever! We never close. Even for holidays, even when it's below zero!"

One 19-year-old told CMD that he wants an ID because he wants to attend the University of Milwaukee Business School and live a normal life.

Republicans nationally and locally are trying to woo Latino voters as the 2016 election approaches. It is hard to see how that outreach will be successful in a swing state like Wisconsin when the far right legislature cannot resist introducing such controversial measures.

Brendan Fischer contributed to this report and has written previously about ALEC's effort to preempt local democracy over wages, paid sick days and many other policies.