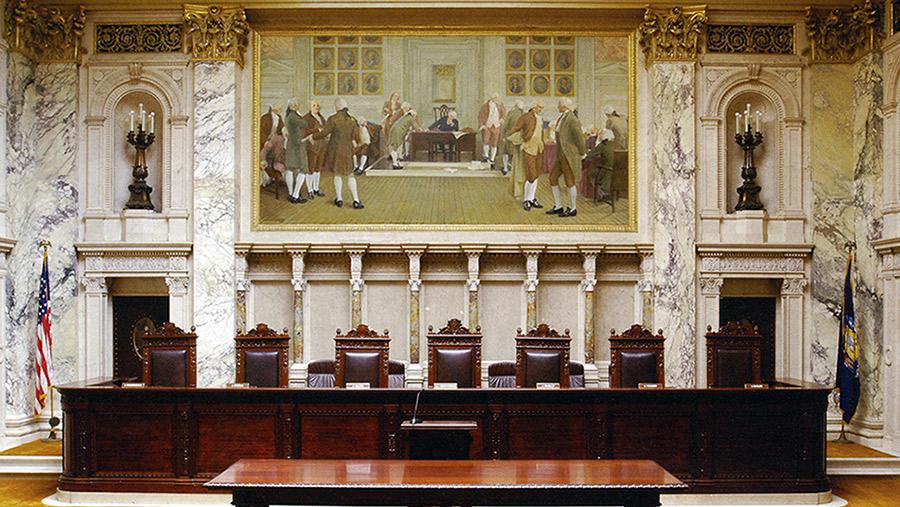 Last week, the Wisconsin Supreme Court's majority took another step to insulate itself from review by the U.S. Supreme Court, the latest twist in the long-running "John Doe" legal saga that has brought national attention to dysfunction on the state's highest court.

"It is hard to imagine how a state Supreme Court could throw more roadblocks in front of an attempt to file [an appeal] with the U.S. Supreme Court than this court has," said former Wisconsin Supreme Court Justice Janine Geske, who is now a professor at Marquette Law School.

In an order issued late on Friday, February 5, the Court barred prosecutors from receiving free, pro bono legal assistance to challenge the conflicts of interest that faced some Wisconsin Supreme Court justices in last year's John Doe case. Under U.S. Supreme Court precedent, some justices likely should not have heard the case at all, since it involved the same groups that spent millions electing the court' majority.

Many in Wisconsin's legal community viewed the order as an effort to diminish the chances that a federal court will take a hard look at the Wisconsin Supreme Court's ethical standards, not to mention to review the decision itself.

"This order is a transparent effort to hamstring the prosecutors’ ability to get the case in front of the U.S. Supreme Court," said Susan Crawford, an attorney at Cullen Weston Pines & Bach. "I guess the majority on the court would prefer to insulate their actions from review."

Yet some justices faced serious conflicts-of-interest in deciding the case, since the same groups that coordinated with Walker's campaign (and which were parties to the case) were among the justices' biggest financial supporters, spending at least $10 million to elect the court's majority. The Special Prosecutor leading the probe, Francis Schmitz, asked two justices to recuse but they refused to do so.

Schmitz vowed to appeal, but in December the Court took the extraordinary step of firing him, rescinding his appointment as Special Prosecutor and hindering any potential appeal.

Yet that wasn't the end of the story: three District Attorneys then moved to intervene in the case, with the express purpose of appealing to the U.S. Supreme Court. Additionally, the District Attorneys asked the court to open the John Doe files to three outside lawyers experienced in U.S. Supreme Court litigation, who had offered free assistance in preparing the appeal.

The Court granted their motion to intervene, but then denied the District Attorneys' request to work with the pro bono lawyers, with minimal explanation or legal justification. The order also barred the specialized printing companies that compile Supreme Court petitions from accessing the underlying evidence at this time.

"Sadly the Wisconsin Supreme Court seems to be making up the law as it goes along," said Peg Lautenschlager, a former Wisconsin Attorney General.

The order "reflects the court's recognition that review of the majority's actions by a federal court might well expose the court and the case to heightened scrutiny and more public awareness of the facts," Lautenschlager said.

Court Trying to Avoid Scrutiny of Its Conflicts-of-Interest

The offer of free pro bono legal assistance came from three lawyers at the firm Reed Smith LLP, which had handled the landmark 2009 U.S. Supreme Court case Caperton v. Massey. That opinion established that judges must recuse themselves from cases involving their biggest supporters, under circumstances similar to those facing some Wisconsin Supreme Court justices.

In the Caperton decision, the U.S. Supreme Court declared that when a donor "had a significant and disproportionate influence on the outcome" of a judge’s election, and when an election was decided by a small number of votes, among other factors, the risk of "actual bias is sufficiently substantial that it ‘must be forbidden if the guarantee of due process is to be adequately implemented.’"

That standard suggests that at least two of the justices should have recused themselves in the John Doe case, which involved an investigation into collaboration between Governor Walker, Wisconsin Club for Growth, and Wisconsin Manufacturers and Commerce (WMC). The two groups were also among the biggest spenders on judicial elections in recent years.

In 2011, Club for Growth, the WMC, and their offshoots spent nearly $3.7 million supporting Justice David Prosser. That was five times as much as the Prosser campaign itself, for an election that ended in being decided by a mere 7,000 votes. Three years before, WMC’s spending in support of Justice Michael Gableman had come in at five-and-a-half times what Gableman’s own campaign spent. The Club for Growth, for its part, also surpassed the Gableman campaign’s spending, helping give Gableman a leg up in a race he won by just 20,000 votes.

Although the U.S. Supreme Court only takes a small percentage of all appeals, the offer of free assistance from experienced Supreme Court lawyers--whose firm had successfully litigated similar cases in recent years--is likely an indication of the strength of a potential appeal on Caperton grounds.

Preparing a petition for U.S. Supreme Court review is a specialized endeavor, and having the assistance of experienced Supreme Court practitioners could raise the likelihood of the nation's highest court granting review.

And that may be why the Wisconsin Supreme Court made up rules to keep the Reed Smith attorneys off the case.

Friday's order provided little explanation for why the District Attorneys were barred from receiving pro bono legal assistance. The majority could not find any justification in Wisconsin law for its decision, and instead relied on the general legal principle that prosecutorial authority in a criminal matter could not be delegated to private attorneys.

There were multiple problems with the majority's assertions--or, as Justice Shirley Abrahamson noted in her dissent, the analysis was "simply an outcome in search of a theory."

One is that the grounds for appeal have nothing to do with a criminal prosecution, so the District Attorneys are not in a position to delegate "prosecutorial authority" to the Reed Smith lawyers.

Instead, it is an appeal of an original action, first filed by the groups under investigation in the John Doe, which sought a declaratory judgment about whether coordinated issue advocacy was regulated under Wisconsin law. The Reed Smith attorneys would be assisting the District Attorneys in asking the U.S. Supreme Court to resolve whether the Wisconsin Supreme Court was correct in declaring that such regulation violates the First Amendment--not in determining whether anybody broke the law, however the law is interpreted.

It is even more difficult to understand how an appeal on Caperton grounds--that is, a challenge to the justices' refusal to recuse themselves from the case--implicates anything resembling the "prosecutorial function." That petition would set forth the facts surrounding the justices' support from the same groups that were parties to the case, and ask the U.S. Supreme Court to declare that constitutional Due Process requires that the justices step aside under these circumstances. Nobody is being "prosecuted" in preparing such a petition.

"The prosecutors are not functioning as traditional prosecutors in a criminal case," said Geske, the former Wisconsin Supreme Court justice. "We don't even have a criminal defendant in this litigation."

Additionally, even if this were considered a criminal case, District Attorneys regularly hire private attorneys to assist with prosecutions. For example, state law allows for District Attorneys to hire private attorneys, without pay, as "public service special prosecutors" to assist investigations and prosecutions. Most typically this statutory provision has been used to allow law firms to lend an associate to a District Attorney's office and still pay their salary. It is difficult to see how hiring a "public service special prosecutor" is particularly different than the circumstances here.

Although the Attorney General would typically represent the state in appeals before the U.S. Supreme Court, in this instance that office has already stepped aside, given the Republican Attorney General's relationships with the GOP officials and operatives who were the subjects of the investigation. And the District Attorneys can hardly go to the governor for approval, since the governor himself is implicated in the John Doe investigation.

"I frankly do not know how to explain the legal rationale of the majority opinion," Geske said. "I cannot understand how the justices can allow the prosecutors to come into the litigation as parties for appellate purposes but deny them their right to counsel."

The prosecutors still plan to appeal to the U.S. Supreme Court--with or without the pro bono assistance of the Reed Smith attorneys--but the clock is ticking. Their petition is due March 1.

"The majority has made this so complicated legally that they may have well succeeded in ending even the very small chance the prosecutors might have to obtain higher review," Geske said.