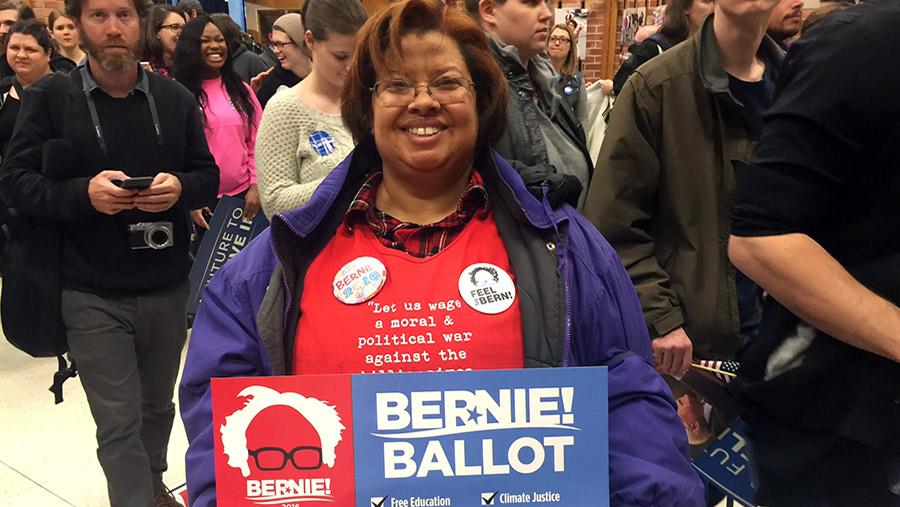 The tiny state of Iowa will be the center of attention tonight as voters in big cities and small towns gather to caucus in schools, libraries, homes, and bars.

This will be the most important Iowa Caucus in recent times because it could propel surging anti-establishment candidates Bernie Sanders into the critical Super Tuesday race March 1 or put a serious crimp in his plans.

Sanders is well ahead in the next caucus state New Hampshire, but neck and neck in Iowa, so he has been doubling down in the Hawkeye State, understanding that its strange caucus system is essential to his path to victory.

"When we started this we were 50 points down," said Pete D'Alessandro, Sanders' Iowa coordinator, at a raucous crowd of 1700 in a tiny gymnasium in Des Moines last night.

D’Alessandro, who once worked in Iowa for U.S. Senator Paul Wellstone, thanked the volunteers and celebrated the fact that the campaign was within striking distance of Clinton (45 to 42), with an unprecedented 3.2 million contributors and 15,000 volunteers at this stage in the game.

If the Sanders camp were to succeed tonight, it would be doubly remarkable because of the ridicule and outright hostility his campaign has received from many in the mainstream press. Just yesterday, campaign manager Jeff Weaver was scolded by a CNN reporter who informed him "not everyone has drunk the Sanders Kool-Aid."

But at the rally Monday night everyone was upbeat. While Iowa organizers explained the nuts and bolts (text us to find your precinct caucus, go in, find our sign and don’t leave until it's over) Texas writer and rabble rouser Jim Hightower explained the mission.

"The Washington elites, they think they are the top dogs and we are just a bunch of fire hydrants," Hightower said. "Economists have a technical term for [how they run the country] and it's called stealing. Well, the powers that be are about to Feel the Bern! Get in those caucuses tomorrow and shock the political establishment!"

The People vs. the Walton Welfare State

Sanders took to the stage of his final rally in Iowa and got right down to business.

To explain how the economy is rigged to benefit those at the top and not the rest of the country, Sanders pointed to the billionaire Walton Family, owners of Walmart, one of the largest corporations in America.

Sanders says the Walton Family "is this richest family in America" and also "the biggest welfare recipient in America. They pay their workers so little, that the American people have to help with workers with food stamps, Medicaid, and subsidized housing. I say to the Walton family, its time to get off welfare and pay your workers a living wage!"

"Together we will tell the billionaire class, they will not and cannot have it all," said Sanders to the roar of the crowd.

Diversity of Issues Inspire Those Who Are Feeling the Bern

A diversity of issues inspired the crowd, which was packed full of young people and especially young women.

His mother explained that Jack was planning on being a doctor so he could probably use a little support.

Kris Dixon had been a nurse in Iowa for 26 years. Her key issue was health care and she thought the nation needed much more than the Affordable Care Act.

Kris thought recent attacks from the Clinton campaign on the topic were just way off the mark. "She talks as if he is going to tear something down. He is not going to tear it down he is going to build it up! He will add people to Medicare and cover millions of people without health care." While the insurance-based programs under the Affordable Care Act have given close to 20 million coverage, the price for some is too steep and 20 million more lack coverage.

Activists from the group Climate Mobilization were also there at the rally to show support for Sanders. The group had sponsored a "climate emergency" debate on Central Campus where a poll of the audience was taken on which presidential candidate was best on the climate issue. 67% of the room went for Sanders.

"We really like the fact that Bernie talks about the issue with a moral urgency, but experts say we are so late in the game and so far from where we need to be that we need to get to zero emissions as soon as possible," explained Ezra Silk.

If Sanders pulls off the Iowa, New Hampshire twofer, you’ll be hearing this statistic often. No candidate has lost the nomination after winning both Iowa and New Hampshire since Ed Muskie in 1972.

But there will be no tears for the Sanders campaigners who hit the streets today at 5 a.m. They are feeling confident that their cadres of enthusiastic volunteers, young and old, are going to the caucuses tonight and they won’t leave until history is made.