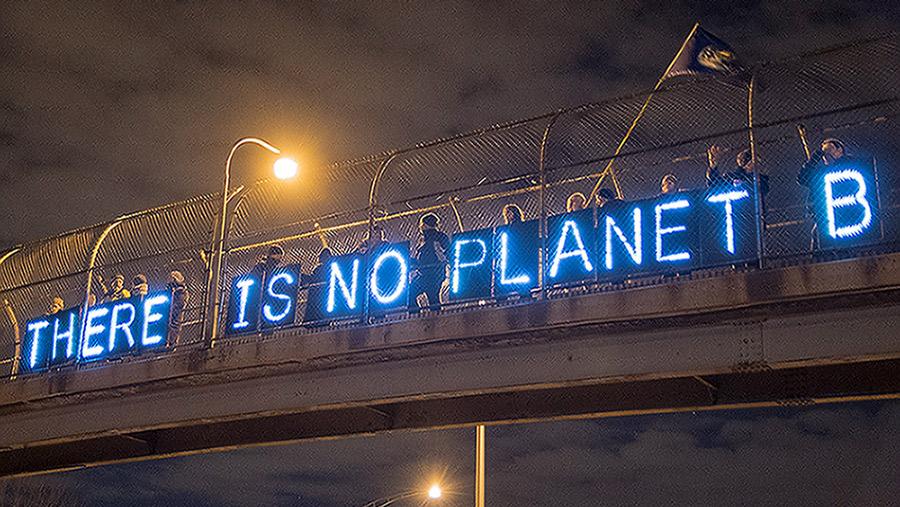 In Paris, 120 world leaders are meeting under the auspices of the United Nations in an urgent effort to prevent catastrophic climate change, which threatens the lives and livelihoods of millions around the globe.

Although experts say it falls short of what is needed, it is also the the most ambitious effort of any American administration to address the climate crisis.

While Republicans in Congress can do little but rant and rail over the measure, states have the power to bog down implementation with aggressive lawsuits and other legal countermeasures.

ALEC has been a key vehicle for advancing this goal.

In 2013, ALEC legislators called for "Guerrilla Warfare" against the EPA and passed resolutions objecting to the EPA's plans to regulate greenhouse gases under the Clean Air Act. At the same time, ALEC ramped up its efforts to roll back renewable portfolio standards and undermine solar energy by "taxing the sun." An ALEC measure to tax solar was pushed by corporate members in Arizona and elsewhere.

In 2014, before the Clean Power Plan was finalized, ALEC adopted a model bill requiring legislative approval of any state plan to implement the EPA's carbon guidelines. It organized conference calls with industry, and encouraged members to meet with and lobby their own attorneys general, governors, and even those in neighboring states to combat the CPP with lawsuits. More than a dozen bills were introduced in statehouses reflecting this effort.

"ALEC has become quite well known and notorious for promoting model legislation. This is different," CMD research director Nick Surgey, told The Guardian. "ALEC is engaging much more broadly in the campaign against the EPA regulations, and they are doing so by asking their members to advocate for the coal industry with attorney generals. That is very unusual for them."

In July 2015, ALEC went further, adopting a model bill ordering state agencies not to implement the power plan without specific new state authorization. ALEC passed another model bill that would allow private corporations and fossil fuel interests to pay for state litigation against the CPP, a corporate slush fund just in case taxpayers got upset about the use of taxpayer dollars to fight on behalf of polluters.

The overarching goal of these efforts is to cast doubt on Obama's ability to deliver on U.S. commitments and scuttle the Paris talks and future negotiations. The goal is also to delay, delay, delay in hopes that a new president will pursue a more polluter-friendly agenda.

ALEC will be meeting behind closed doors with polluters in Scottsdale, Arizona, December 2-4 to consider a model bill to discourage subsidies for electric cars. Apparently, the ALEC crowd is not at all concerned about the annual $37.5 billion Uncle Sam pays in fossil fuel subsidies.

ALEC is not just out of touch with the world, it is out of touch with its own base. Prominent GOP pollsters have shown that 72 percent of conservative Republicans want to accelerate the development of clean energy to reduce pollution and create jobs; a solid majority 54 percent believe the world's climate is changing and that mankind plays a role in the change.

Polluters of the World United Behind ALEC

If you are wondering what is behind ALEC's suicidal tendencies, look no further than the ALEC corporate roster.

Yet the ALEC corporate funders list is still is packed with utility companies, fossil fuel firms, pipeline firms, and oil speculators who play dirty. Many have track records of contempt for the law, public safety, and the environment.

Chevron, Exxon, Peabody, Dominion, Duke Energy, and ALEC stalwart Koch Industries are just a few of the big names orchestrating ALEC's pushback on the CPP. These firms have something in common: million of dollars in fines and penalties for repeat violations of federal law. The total penalties for just the top ten ALEC energy firms is $543,051,962. 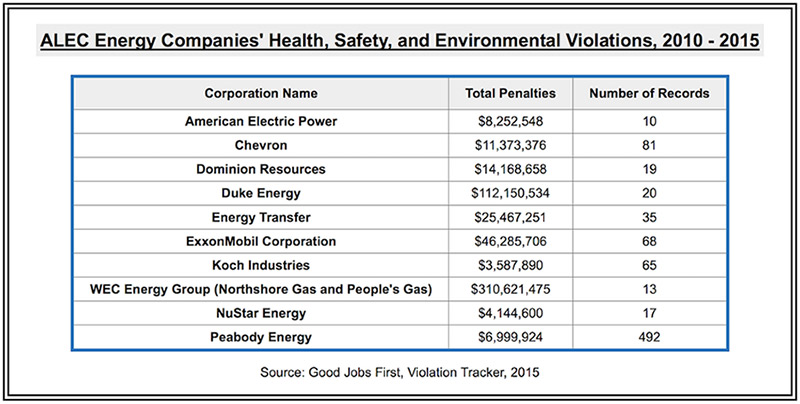 A deeper dive into the data exposes the tragic details behind the dry statistics.

Examining Duke Energy using Violation Tracker, the first online data set to track corporate misconduct across federal agencies, the public can see that between 2010 and 2015, Duke Energy and its subsidiaries were subject to 20 penalties totaling a whopping $112,150,534.

These include five OSHA violations for the tragic electrocution of a 36-year-old husband and father in 2014 and a massive toxic coal ash spill in North Carolina's Dan River in 2015 that resulted in three subsidiaries of Duke Energy pleading guilty to nine criminal violations of the Clean Water Act.

Duke Energy also appears to be part of an array of polluters, hiding behind the name "Utility Regulatory Group," who are also suing to prevent the implementation of the CPP.

New scientific reports are offering incontrovertible evidence that the destructive and costly effects of climate change "have already begun to sweep the planet," reports the New York Times.

"Never have the stakes of an international meeting been so high, since what is at stake is the future of the planet, the future of life," said President Francois Hollande of France told Paris conference attendees, which included over 120 world leaders. Russia's Vladimir Putin called climate change humanity's "greatest challenge," while the Pope called inaction "suicide."

But you won't hear any of this at this week's ALEC meeting, where legislators are encouraged by ALEC funders to keep their heads firmly in the tar sands.

Opponents to President Obama's effort to reduce U.S. carbon pollution for the benefit of the nation's citizens and the world "are on the wrong side of the law and the wrong side of history," says Howard Fox, a lawyer with the environmental law firm Earthjustice.

The only problem is that our history of carbon pollution is rapidly catching up with us.