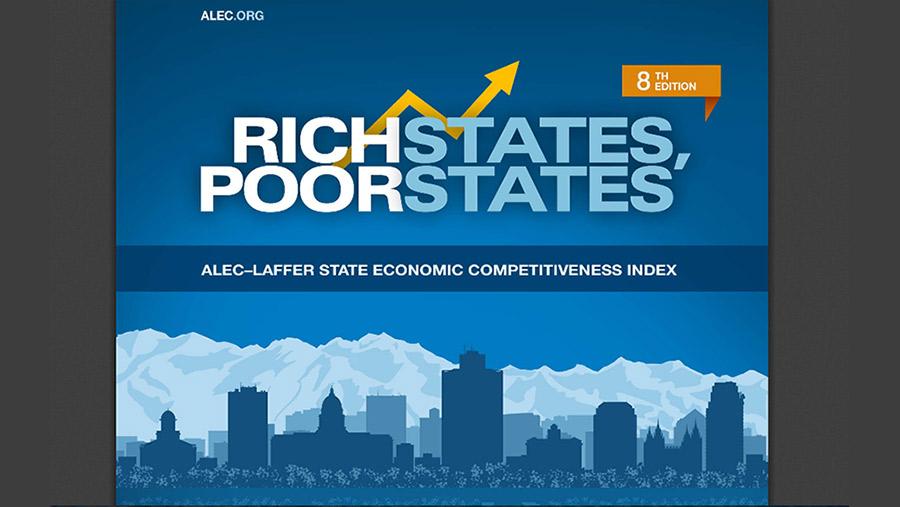 Today, the American Legislative Exchange Council (ALEC) rolls out another edition of its "Rich States, Poor States" publication. The publication annually slaps a fresh coat of paint on the flawed fiscal and economic austerity policies favored by the group and its corporate patrons.

It's going to take a lot of paint this year.

The poster child for the ALEC anti-tax, low-wage policy agenda is Koch Industries' home state, Kansas, which has been plugged by Governor Sam Brownback as a "real live experiment in supply side economics. But Brownback's tax cuts have thrown the state into fiscal crisis, saddling the state with a projected budget deficit of $190 million for the next fiscal year, no reserves, slashed public services, and lagging job growth. Although wealthy taxpayers and businesses have reaped big benefits, it's an economic disaster for working families.

Sold to the press and state policymakers as an objective, academic measure of state economic performance, "Rich States Poor States" is in reality a scorecard ranking states on the adoption of extreme policies pushed by the Koch-funded ALEC that have little or nothing to do with good economic outcomes.

The ALEC project that publishes the report, dubbed the Center for State Fiscal Reform, has received large grants from the Bradley Foundation, the Searle Foundation and the Claude M. Lambe Foundation, a Koch-controlled foundation that spent down and is now closed. Records indicate that the eponymous Charles G. Koch Foundation gave ALEC $150,000 in 2014, and Koch Industries and other Koch-led groups may also be donors. Those foundations are major funders of a national right-wing infrastructure that includes ALEC and its sibling group, the State Policy Network, 60+ state-based "think tanks" that produce talking points and more to advance ALEC's legislative agenda of tax breaks for corporations, steep budget cuts, and attacks on workers rights.

ALEC brings together corporate lobbyists and state legislators to actually vote on "model" bills behind closed doors, which are then proposed to become binding laws by ALEC state legislators across the country. Less than 1% of its revenue comes from the lawmakers it highlights as members. ALEC is funded by huge corporations, including Koch Industries, which has long had a seat and a vote on ALEC's corporate board, Altria (the former Phillip Morris), and Exxon Mobil, which has used ALEC to help peddle climate change denial and more. ALEC task force meetings, where bills are promoted and voted on, are closed to the press and the public.

Report's Methodology Has Been Debunked

The lead author of the "Rich States, Poor States" report is economist and "ALEC scholar" Arthur Laffer. Influential in Republican circles, Laffer is considered the father of "supply side" economics–the notion of slashing taxes and government spending to spur economic growth. Adoption of Laffer's policies generated enormous federal deficits under presidents Reagan and Bush I, and have been widely dismissed as "voodoo" and "junk" economics.

"Obviously ALEC is ranking states based on each state's level of deregulation and awarding the most deregulated states, but the outcomes seem to have very little bearing in where companies actually want to launch and do business," Weisenthal said.

Good Jobs First and the Iowa Policy Project issued a comprehensive report in 2012, "Selling Snake Oil to the States," critiquing "Rich States, Poor States" on methodological grounds. The authors concluded that the criteria that ALEC uses to rank states, such as eliminating progressive taxes, suppressing wages, and cutting public services are actually a recipe for economic inequality, declining incomes, and undermining public infrastructure and education that really matter for long-term economic growth.

The devastating impact of the Koch/ALEC budget agenda in Kansas must be enough to make some people glad they're not in Kansas anymore.

The result of Governor Brownback's ALEC-backed policies in the Sunflower State has been to widen the income inequality gap by shifting income to the state's wealthiest taxpayers and corporations, while suppressing wages and cutting services for the middle class, low-income children, and veterans. Brownback slashed education funding by $51 million last school year, forcing the early closure of Kansas schools, and asked for another $62.6 million in cuts this past July. Meanwhile, Kansas corporations walked away with $276.7 million in tax breaks and subsidies during Brownback's first term in office.

The biggest benefits of Governor Brownback's 2012 tax program went to the top 1% while actually increasing taxes for the bottom 20%. Kansas now has the 9th most unfair tax system of any state in the country, according to the Institute on Taxation and Economic Policy. The poorest 20% of Kansans pay 11.1% of their income in state taxes, while the richest 1% pay just 3.6%.

ALEC's supply-side policies are getting a cold reception among Kansas residents. A recent poll found that Governor Brownback is the most disliked governor in the country, with an approval rating of only 26%, and that three out of four people surveyed believed they were paying higher state taxes now than two years ago.

"ALEC is rolling out this latest report on the eve of its meeting in Arizona with the 2016 election heating up to try to convince people that its prescription of tax cuts for the rich and austerity for the rest of us is sound economics," said Lisa Graves, Executive Director of the Center for Media and Democracy. "Those policies have failed in Wisconsin, and they are failing in Kansas."