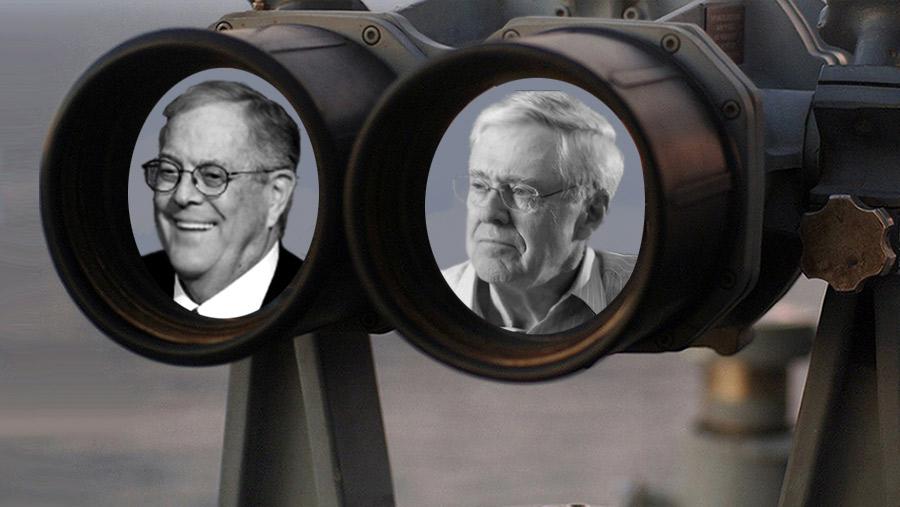 The Kochs have been complaining about a "lack of civility in politics" as they seek to boost their public image--but one of their top operatives helped propel perhaps the most egregious case of race-baiting voter fraud hucksterism in recent years.

At the same time that the Kochs have been on a PR blitz, publicly spinning an image of themselves as well-intentioned patriots trying to make the world a better place and decrying "character assassination," they've been quietly ramping up a clandestine surveillance and intelligence gathering operation focused on their perceived political enemies, Ken Vogel reports at Politico.

At the helm of this "competitive intelligence" operation is a man named Mike Roman, Vice President of Research for Kochs' Freedom Partners and who was paid $265,000 last year, according to Freedom Partners' recent tax filing.

But who is Mike Roman? He's been described generally as a longtime GOP operative. However, he's also the guy who was behind the release of the 2008 "New Black Panthers scaring old white ladies at the polls" video. The clip dominated Fox News for months and went on to fuel unfounded allegations that the Obama administration's Department of Justice was biased against white people.

Roman made a name for himself by releasing the video, which showed a New Black Panther Party (NBPP) member holding a billy club outside a Philadelphia polling place, on his voter fraud-peddling "Election Journal" website. He then worked with Republican vote fraud conspiracist J. Christian Adams to try uncovering evidence that voters were intimidated--which they could not find. But that didn't stop Roman, along with Fox News and the conservative echo chamber, from conjuring up a vast racist conspiracy inside the Obama administration, a theme that continues today.

As the conspiracy theories grew, Roman was given a column at Breitbart.com, where he continued to push a "scandal" narrative and to suggest a wide-ranging conspiracy involving ACORN, NBPP, and the Obama administration to steal elections. (Roman even launched a voter fraud app.)

In 2010, another vote fraud conspiracy theorist, the Wall Street Journal's John Fund, put right-wing video hitman James O'Keefe in touch with Roman for intel about a purported SEIU voter fraud scheme in Boston, which turned out to be bunk.

During this same period, the Koch-funded American Legislative Exchange Council (ALEC) was similarly targeting ACORN and pushing a model "Voter ID Act" to combat the nonexistent scourge of voter fraud--but which had the documented impact of disenfranchising potentially millions of students and voters of color who do not have the limited forms of IDs required under the law.

In 2010, Roman was named chief of staff to Rep. Bobby Schilling (R-IL) when he was elected to Congress for one term. Koch Industries and John Fund were among Schilling's top donors.

It is not clear when Roman was formally folded-in to the Koch network. Freedom Partners' new tax filing for 2014 is the first where he appeared as Vice President of Research. But tax filings as far back as 2012 describe Roman as the trustee of the mysterious "Public Engagement Group Trust," which has the same address and suite number as another Koch group, the Center for Shared Services Trust.

Apparently Roman's years of stoking unfounded paranoia about stolen elections prepared him for a high-ranking position in the Koch operation.

In his role as the Kochs' top spy, Vogel reported, Roman has "worked to keep himself and his activity low-profile even within the discreet Koch operation."

"They act all cloak and dagger–like the CIA," one source told Vogel. "There was a joke about how hardly anyone ever met Mike Roman. It was like, if you wanted to find him, he'd be in a trench coat on the National Mall."

His favorite reads include books like "Data Mining and Analysis" and "Intelligence Analysis: a Target-Centric Approach," as well as Saul Alinsky's Rules for Radicals, the left-wing organizer's manual that has gained traction on the right in recent years.