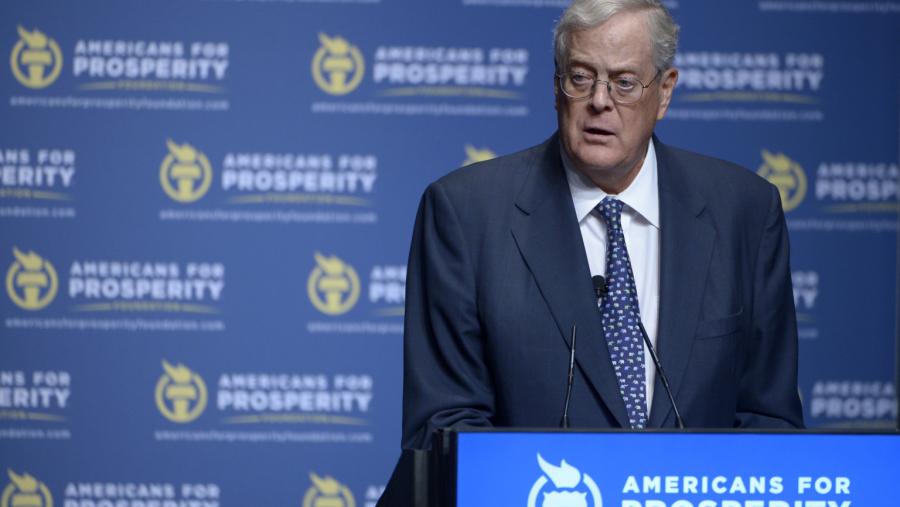 -- By Brendan Fischer and Mary Bottari

Freedom Partners, officially organized as a "business league," acts as a conduit for the hundreds of millions raised from David and Charles Koch and their wealthy allies. According to the group's 2014 tax filing, made public on Tuesday, Freedom Partners raised $126 million during the 2014 midterm elections and dispersed it to political organizations within the Koch network, with almost all of that funding coming from "membership dues" paid by the billionaires and millionaires who attend the Kochs' biannual donor summits.

The group's revenue jumped 350 percent from the previous year--from $35,800,000 in the non-election year 2013 to $125,946,972 million during the 2014 midterm elections--a pattern more common to political committees than the "business league" that Freedom Partners claims to be.

According to the Freedom Partners filings, one of the Koch network's biggest investments has been in its growing voter database.

"Demeter Analytic Services" looks to be the funding conduit for the Koch data analytic operation that is giving the Republican Party a run for its money. It received $11 million from Freedom Partners in 2014, and is described in tax filings as one of five C-Corporations wholly owned by Freedom Partners.

This is more than twice as much as Freedom Partners reported giving to its data efforts in 2013.

Although Demeter doesn't have a web presence, it appears to operate from the same address and same suite as the entities associated with the Koch data operation (the nonprofit Themis Trust and its for-profit arm i360), according to the address on FEC filings describing payments to Demeter.

It is not clear whether Demeter replaced Themis Trust, the Koch data operation also named for a Greek god that had previously been working with i360.

The Koch network launched its massive voter data operation with the goal of "amassing detailed voter profiles and developing the sort of technological wherewithal that propelled President Obama to victory in both 2008 and 2012," according to the National Review. i360 is led by Michael Palmer, former chief technology officer for Sen. John McCain's 2008 presidential campaign.

The i360 website boasts of a database of over 250 million voters. "We source thousands of attributes from multiple consumer data compilers, constantly refresh voter registration information from all states and gather millions of political and issue attributes on an ongoing basis," its website states. The data is "targetable on both TV and digital media – enabling you to deliver a consistent message to your target voters, whether they are reading their mail, surfing the web or both."

One way the operation collects voter data is by buying it directly from states. Demeter is the sole funder of a Super PAC called "VFA PAC" that hasn't made any independent expenditures—but which did purchase voter lists from the Secretaries of State in places like Virginia, Illinois, and North Dakota.

The data is perfected by extensive canvassing by other groups in the Koch network, including the Koch-funded Americans for Prosperity, Concerned Women of America, Libre Initiative and Concerned Veterans of America. According to the Washington Post, the Koch political operations employ 1,000 full-time staff, more than double the number four years ago.

Many observers think the project has already eclipsed the voter lists maintained by the Republican National Committee (RNC), posing a risk for some candidates and the party's influence. Politico recently reported that the Kochs had "spurned entreaties from the Trump campaign to purchase state-of-the-art data and analytics services from a Koch-backed political tech firm called i360."

But the Koch data operation didn't turn down Ben Carson.

Although the Kochs rejected Trump, Carson's campaign has paid Demeter Analytic Services around $11,000 per month to access its voter database, according to recent filings. Carson's presidential exploratory committee also paid $21,196 to Demeter for list rental.

There is no evidence that any other presidential candidate has accessed the Demeter database.

According to one source, it filed for seven H1B visas in 2014.

Foreign workers are not uncommon for tech industry, but it is a little bit odd that the Kochs' effort to reshape U.S. politics is staffed with foreign labor.

Tens of Millions to Koch Groups, Millions More to Chamber,

In addition to the data operation, Freedom Partners funds went to a number of well-established groups within the Koch network, such as:

But those "regular checking-account holders" should have $50 billion or more to catch the "Main Street Growth Project's" attention. The policies that the "Main Street" group is working on would largely affect the massive financial institutions that meet the threshold for a "systemically important financial institution" and trigger extra regulatory scrutiny under Dodd-Frank.

During the 2008 financial crisis behemoth institutions like insurer AIG helped create the crisis and spread the contagion around the globe by peddling dangerous derivatives products, but because they were not regulated like banks (which can be taken over and dissolved by the FDIC), the federal government struggled to resolve the serious threats posed to the economy by the collapse of AIG.

Part of the solution was to create an uber-oversight body authorized to break apart or even shut down massive financial institutions threatening the U.S. and global economy called the Financial Stability Oversight Council (FSOC). While the Main Street Growth website presents the FSOC board members as random Obama appointees, in fact it includes the most powerful financial regulators in the country, including the Secretary of the Treasury, the Fed Chair, and the heads of the SEC, FDIC, CFTC, OCC and more.

Main Street Growth Project was started by former Romney and Paul Ryan staffers as well as AEI's Paul Wallison to help institutions fight the "systemically important financial institution" designation. They comfort asset managers: "You didn't cause the financial crisis. But now you're getting caught in the regulatory crossfire. We're here to help."

Today, as David Dayen reports, the roll back of the modest Dodd-Frank protections against another financial collapse is still priority number one for the GOP Congress. Among other attacks on the bill, the GOP wants "to raise the asset threshold for automatically labeling a 'systemically important financial institution' (SIFI) from $50 billion to $500 billion, giving big firms relief from expanded regulation under Dodd-Frank. They would also give existing SIFIs ways to wiggle out of the designation."

Some Freedom Partners funding can be directly tied to ALEC politicians running for higher office.

In Colorado, where ALEC alum Cory Gardner was running for U.S. Senate, Freedom Partners gave $95,000 to "I Am Created Equal" (IACE) Action and $50,000 to the Colorado Women's Alliance.

The two women-focused groups worked to blunt attacks on Gardner from his opponent, incumbent Sen. Tom Udall, on issues of abortion rights.

This year, IACE Action was active in fighting a local Colorado Springs referendum to increase the sales tax by .62 percent to fund road improvements. Americans for Prosperity, whose Colorado chapter is based in the city, also publicly opposed the referendum.

The Freedom Partners filing shows that the Kochs were also behind the mysterious dark money group "Trees of Liberty," which spent hundreds of thousands in the Iowa U.S. Senate primary backing ALEC member Joni Ernst, who had previously been considered the underdog in the race.

The network's early support for Ernst shows that the Kochs are increasingly intervening in GOP primaries and hand-picking candidates, as Politico described.

After Ernst secured the nomination, she was backed with big spending from Koch groups, including Freedom Partners' Super PAC the "Freedom Partners Action Fund," Americans for Prosperity, and the 60 Plus Association, as well as the U.S. Chamber of Commerce, which received $2 million from Freedom Partners in 2014.

Although the Kochs have recently been on a PR blitz framing themselves as "classical liberals" who oppose government intervention into private affairs, both Gardner and Ernst are vehemently opposed to a woman's right to choose.

Freedom Partners gave over $1 million to CitizenLink, the political arm of the religious right group Focus on the Family.

CitizenLink is currently campaigning to defund Planned Parenthood and has been a big supporter of anti-LGBT candidates who "work against basic civil rights and legal protections," according to the Human Rights Campaign. Freedom Partners also reported giving $1.3 million to CitizenLink in its previous tax filing.

Freedom Partners additionally gave $5.7 million to "EVNGCHR4 Trust," another evangelical religious right entity that in past years has passed most of its Koch funding to CitizenLink.

The Koch data operation, "Demeter Analytic Services," is one of five "C-Corporations" listed on the tax filing as wholly owned by Freedom Partners.

Freedom Partners has become notorious for creating a complex web of interlocking legal entities to disguise the flow of funds from one group to the other.

"Thoco" is listed as a "holding company" directly controlled by DblDbl Inc.

Dbldbl, Inc. is described as a "consulting company," as is Knslt, Inc.

Cavhoco, Inc. is described as a "holding company."

Cavhoco, in turn, is controlled by "American Strategies Group LLC."

In another part of the tax filing, "American Strategies Group LLC" is described as a "disregarded entity" wholly owned by Freedom Partners.

Confused yet? That may be the goal.

Although Freedom Partners has been described as the "Koch Brothers' Secret Bank" and is a major conduit for funding from the Koch network, it isn't the only source of Koch bucks.

Both Charles and David have their own personal foundations that disclose grants to a similar set of groups. And documents show that the brothers write personal checks to AFP and other Koch-connected organizations, and use the corporate treasury of the privately-held Koch Industries to fund political organizations, without any public disclosure.

David Armiak contributed to this article