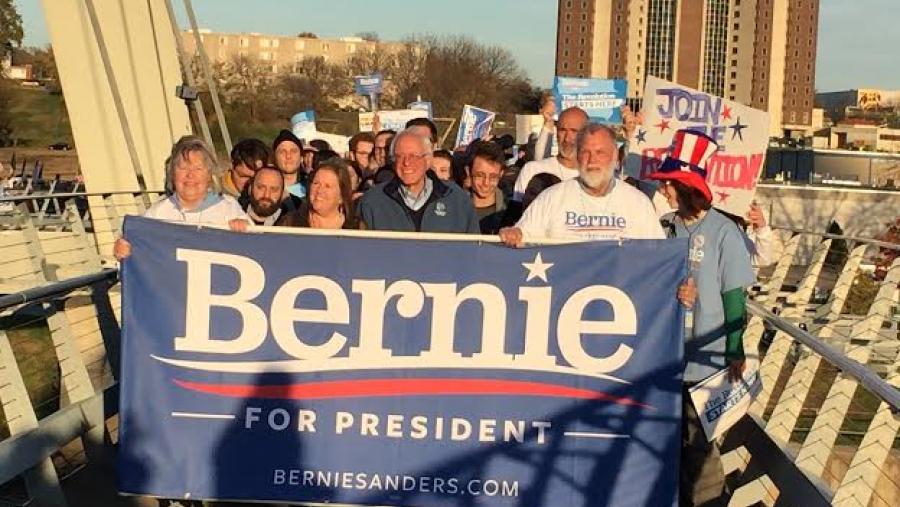 The Jefferson Jackson Dinner is a seminal event in Iowa politics. It is credited with boosting Jimmy Carter's candidacy in 1975 and giving Barack Obama a break-out moment in 2008, which led to his Iowa caucus victory and the realization that Obama could win middle-America.

The dinner is like no other. Six thousand diners dressed in their best are literally surrounded by bleachers broken into camps. Each camp is led by a cheerleading squad, whose job it is to hand out the glow sticks, teach the latest chants and keep the crowd pumped in case the cameras turns their way.

By the time the candidates take to the stage, the yelling and stomping is cacophonous. 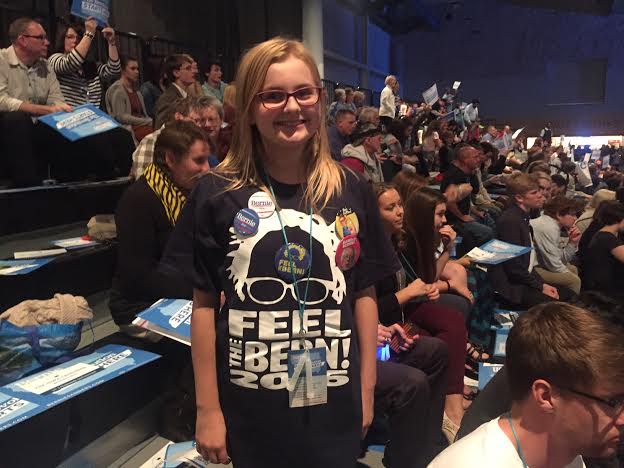 Preparations for the dinner begin months in advance, with campaigns organizing rallies, concerts and other events to bring supporters to the hall. Sanders supporters sponsored a "Rocking in the Bern" concert in Davenport the night before with William DuVall of Alice in Chains, legendary guitarist Wayne Kramer of MC5, Marshall Crenshaw, Jill Sobule and Brother Trucker entertaining a packed house before Bernie Sanders, the U.S. Senator from Vermont, took the stage.

The next day, Sanders rallied his supporters in a park across the Des Moines River and marched across a graceful suspension bridge to the dinner venue.

On the bridge, a young woman named Linnea Schurig held a sign "This Capitalist Voting for Bernie." Schurig is in her 3rd year at Grinnell College, majoring in political science,and is supporting Sanders. "Climate change is a critical issue," she explained. "At this point, we can't afford to elect someone who will not take the science seriously, who will not take action."

Lucas Verrastro agrees, adding "we need to fix the campaign finance system, reforming that will allow a lot of other problems to be worked out."

Both issues were featured by their candidate inside the hall. As part of his regular stump speech, Sanders promises to continue his work to tackle the climate crisis (he has opposed the Keystone Pipeline and proposed a Carbon Tax) and he likes to remind people that he is the only candidate without a Super PAC. "I am proud to state that I am have the largest number of donors than any candidate in history at this stage in the race," and "most contribute about $30," Sanders told the crowd.

But Sanders veered from his usual remarks to make pointed comments about times in his career when he "faced a fork in the road."

"Time and time again when I came to a fork in the road and I took the right fork even though it was not popular at the time," said Sanders, discussing his long history of opposing "free trade" deals like NAFTA, CAFTA, the WTO and China free trade that have cost America millions of jobs.

"TPP, not now nor has ever been the ‘gold standard' of trade agreements" said Sanders, referencing a line that Clinton used when she supported the trade deal as Secretary of State. "I did not support it yesterday, do not support it today and will not support it tomorrow."

The press started scribbling when they realized Sanders was poking Clinton for her recent conversions on a series of issues. Without mentioning her by name Sanders went through the list, touching on his opposition to the Keystone Pipeline, his votes against the Gulf War and the Iraqi invasion and his vote on the Defense of Marriage Act (DOMA), which banned marriage equality. President Clinton signed DOMA into law in 1996 and Hillary Clinton was recently asked about the Clinton's support for the measure on Rachel Maddow.

As for those who say he is unelectable, Sanders asked them to recall how the experts eight years ago called someone else "unelectable."

"Remember that guy? Oh, it's President Obama!" he said. "Well Iowa, I think we are going to prove the pundits wrong again. I believe we're going to make history one more time."

His speech made clear that Sanders was not backing down or bowing out, making it the most newsworthy of the night. In the latest Des Moines Register/Bloomberg Politics Iowa poll, only seven points separate Sanders from Clinton, though the poll was taken before the Benghazi hearings last week.

Outside the HyVee Hall, former Maryland Governor Martin O'Malley gathered a group of young supporters who were demonstrating an energy level far in excess of their numbers. "I-O-W-A -- O'Malley all the way!"

Inside the hall, Iowan Aaron Schoeneman said that he was a fan of O'Malley because "he has a lot of experience and he's not a flip flopper." Schoeneman said that while he agreed with Sanders on all his positions, he thought Sanders was going to have a "serious problem" explaining Democratic Socialism to people during the general election.

"If he can't explain it well to me when I agree with him on all the issues, he is not going to be able to explain it to the voters," he said. Sander's habit of citing the experience of other countries is not enough.

Another couple in the O'Malley section was torn between all three candidates and not sure who they would caucus for. But they sat in the O'Malley section to lend support. "He is not being treated fairly, he got a raw deal during the first debate. He should have had more opportunity to explain his positions, he has some very good ideas."

O'Malley gave a strong speech under the theme of "action not words" focusing on his record, in partnership with a Democratic legislature, of enacting many of the policies that Sanders and Clinton could only dream of enacting at the federal level with a recalcitrant Congress. 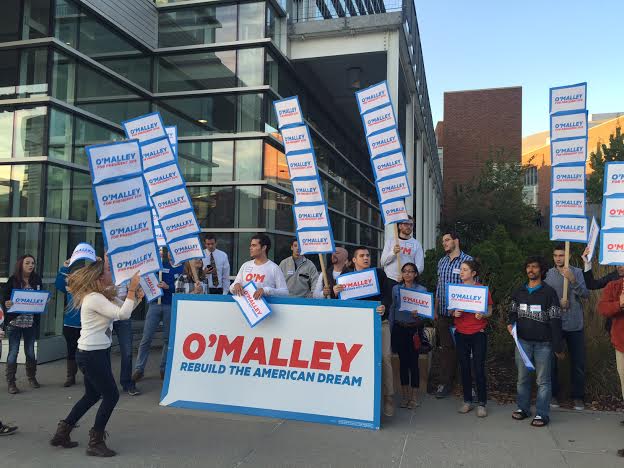 "As Governor, I made it easier not harder for all Americans to bargain collectively. I increased funding for public education and we made our public schools the best public schools the best five years in a arrow. We passed the Dream Act, marriage equality and the most comprehensive gun safety legislation in the nation," said O'Malley in a well-drawn speech. He also pointed to success in raising the minimum wage and freezing college tuition.

But if O'Malley was reaching for a break-through moment he may have fallen short due solely to the fact that all three candidates made a very strong showing.

Hillary Clinton: "I'm with her!"

Clinton supporters arrived early to secure all the parking stalls up and down the street in front of the venue and they held the spots all day long. Cars were festooned with Clinton slogans including "#Hillyes!" and "Madame President."

Twenty-year old Priscilla Rumbeiha and her mom Enid waited near the stage tents for a glimpse of Clinton. Priscilla is a student at Notre Dame."I really want her to bring down student loan debt and help students pay it off," she said. Both she and her mother were excited to help elect the first woman president who would talk about issues that mattered to them, "especially equal pay for equal work." 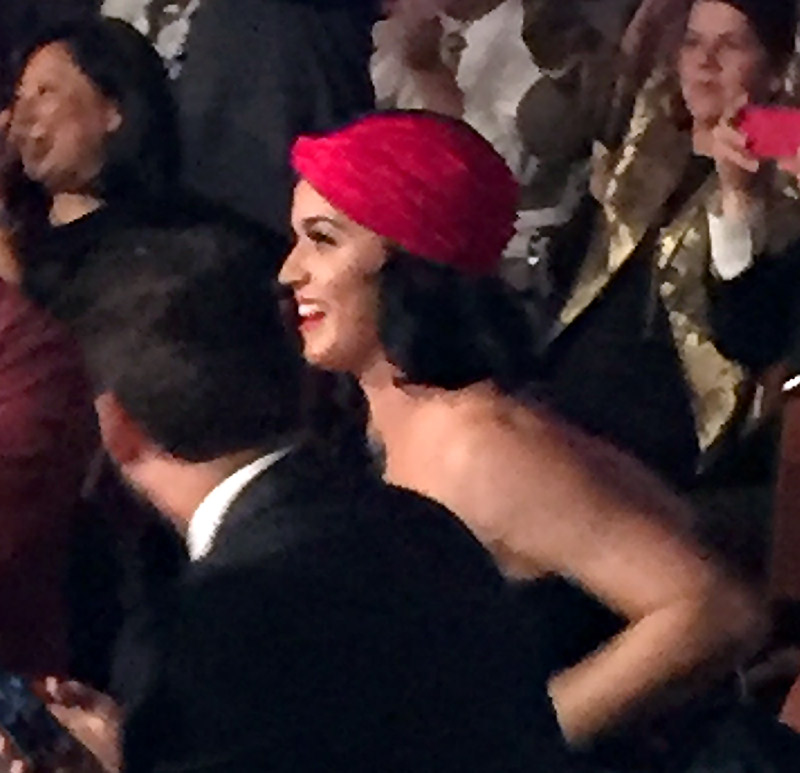 After a strong performance in the CNN debate and at the Benghazi hearing, where after 11 hours of grilling the GOP failed to land any punches, Clinton could have coasted into this Iowa event. But instead she poured on the energy and rallied her troops in downtown Des Moines with pop star Katy Perry, who wore an American flag as a cape dress and opened with "Roar," now a Clinton campaign song. Perry told the crowd "wake up America, we can do better and we have better choices!" before segueing into "Wide Awake," followed by "Firework."

Also on hand was President Bill Clinton, who complained about "the stranglehold women have had on the job of first spouse." After the rally, the Clintons spent a long time taking pictures with the crowd.

Inside the hall, Judith Harvey was a supporter who planned on caucusing for Hillary in West Des Moines. "It would be good to have a woman president. She has done a very good job in her career in politics." 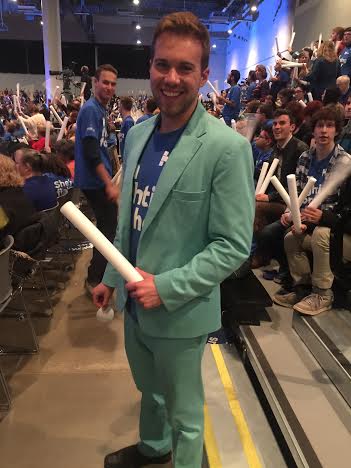 "I'm not at all worried about that email issue, I watched that Benghazi hearing and she handled it with a lot of class and humor too," she said.

That class and humor was on full display as Clinton took to the stage, looking fresh from the weeks ordeal and downright presidential. She spent no time talking about the Benghazi hearing and swung right into an upbeat speech with some amusing pokes at the GOP candidates.

The speech was written as if she already had the nomination and she linked herself to aspects of Bill Clinton's and Barack Obama's record.

In a litany of issues, Clinton was the only candidate to discuss choice. "I will do everything I can to protect a woman's right to chose and defend Planned Parenthood," she said.

Her only reference to other candidates came at the end. "We can't just rail against the GOP or billionaires, we have to actually win elections!"

Both Clintons spent hours working the rope line after the speech, posing for pictures with everyone who stayed. After narrowly losing the Iowa caucuses to Barack Obama in 2008, this time around Clinton appears to be taking nothing for granted.