With Federal Millions, "Wild West" of Charters Is about to Get Even Wilder | PR Watch

With Federal Millions, "Wild West" of Charters Is about to Get Even Wilder 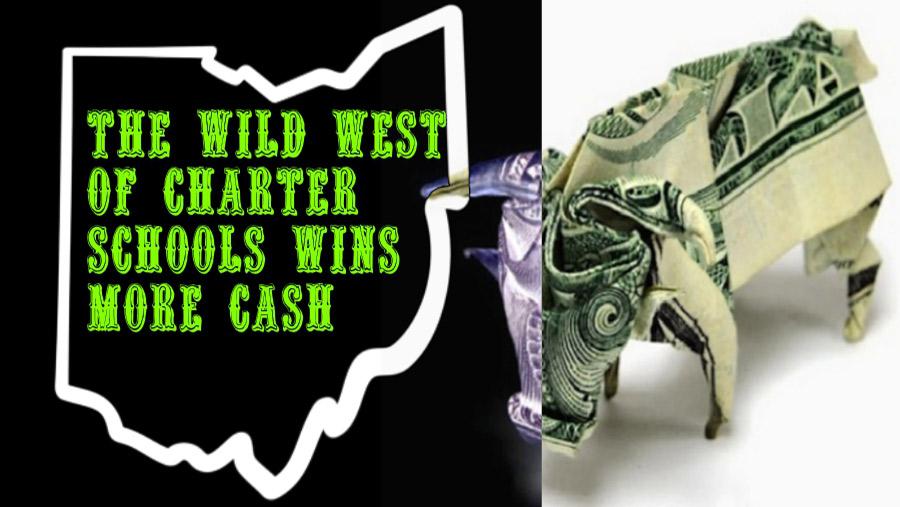 The U.S. Department of Education (ED) has announced the winners of the next round of state (SEA) grants under the quarter-billion-dollar-a-year Charter Schools Program (CSP) designed to boost the charter sector.

While eight state departments of education shared a $125-million pot of federal taxpayer money for 2015, the biggest recipient by far for this round of grants is Ohio. It landed a whopping $32.6 million grant to the dismay of public school advocates.

With its lax-to-non-existent charter school laws, and vast number of unaccountable authorizers, Ohio has long been an embarrassment even to the charter school industry.

"It's more broken than the Wild West," a spokesperson for the National Association of Charter School Authorizers told Cleveland's Plain Dealer last year.

The Good, the Bad, and the Ugly?

But as CMD has documented, ED has never quite decided whether to bet on the sheriff or the outlaw in its approach to the Elementary and Secondary Education Act, which provides for the federal largesse that has fueled the charter school industry, even with its numerous failures.

To a certain extent, the charter school funding mechanisms were designed to reward "lawlessness"—that is, states in which authorizers call the shots while the departments of education act like banks or conduits for cash but lack any real statutory authority to hold the ultimate recipients accountable. This comes under the mantle of "flexibility" recited by charter advocates.

This flexibility has been a recipe for disaster in state after state, but Ohio—which has already received CSP grants of nearly $125 million—offers a particularly bleak picture.

CMD conducted a review of the schools in the Buckeye State that were awarded money under the 2007-2011 grant cycle, and found that:

This time around, however, things are bound to be different, right?

Such was the optimism of Nadya Dabby, assistant deputy secretary with ED. When asked by Lyndsey Layton of the Washington Post why the state "with multiple charter school problems received the biggest federal grant," she assured her that Ohio has improved its oversight of charters.

"Although," noted Layton, "she could not provide details."

But a look at documents released yesterday shows that the reviewers contracted by ED to score the applications have adopted a position that Ohio is now practically a model for oversight, in terms of holding charter authorizers accountable.

Notably, the process for becoming a reviewer of potential awardees for ED seems designed to ensure that the only people who can pass the screening to volunteer for the role hail from the charter school industry in some way.

But while out-of-state reviewers were deliberating on Ohio's application—extolling the virtues of the new authorizer "frameworks"—events in Ohio took a sudden and rather less virtuous turn.

In June, The Plain Dealer discovered that the much-touted Office of the Quality School Choice was actually "giving overseers [i.e. authorizers] of many of the lowest-performing schools a pass from taking the heat for some of their worst problems" by scrubbing data from low performing online schools in their performance reviews.

"We found that the state isn't counting the performance of online schools—one of the most-controversial and lowest-performing charter sectors—in the calculations ... This means that many F-rated charter schools that serve thousands of students won't be included when their oversight agencies are rated this year," the paper wrote in its exposé.

So much for Ohio's "highly effective" method of oversight.

The director of Ohio's Office of Quality School Choice, David Hansen, fell on the sword and announced his resignation in July. But Democratic lawmakers suspect that this goes higher up in the chain of command, and have called on State Superintendent Richard Ross to resign. Emails released this month to state newspapers under an open records request confirm that several agency employees knew about the scheme, although there is no direct link to Ross.

But none of this scandal apparently deterred the federal officials in charge of handing out big money for charters.

For all its self-touted commitment to transparency, ED has refused to honor a CMD Freedom of Information Act request for the state grant applications.

It has chosen instead to make the final decision with no input from the real stakeholders, from families in Ohio who have been reading about press investigations of the industry.

It is possible that the ED official who signed off on the grant did so with no knowledge of the Ohio charter scandal that made a mockery of the pious accountability pledges of the state. Alternatively, the grant may have been approved despite the ongoing scandals in Ohio charters, without any accountability for proceeding.

"Aggressive" Charter Expansion in the Works

According to a recent report by the Ohio Charter School Accountability Project, each charter school in the state currently spends more than twice as much of their revenue on administration compared to public schools.

To offset this cost—which includes advertising buys to lure parents to send their kids to the schools and bonuses for the CEOs—they have had to cut corners. And they have done so by allocating $1,000 less per student and year on classroom instruction. Plus, charter school teachers generally make 40% less than their public school colleagues, even as charter executives and outsourcing firms get richer.

One thing seems certain: with the new millions in federal money for Ohio, the Wild West of charter schools, is going to see a gold rush.

ED has promised to release data on "the more than 4,000 charter schools funded under CSP since its inception." But until it makes good on the promise, CMD has chosen to publish data on the Ohio charter schools that were created under the 2007-'12 grant cycle.

Oh, this is just great. First Ohio deliberately manipulates its charter school data in order to make it look considerably better than it is, then they win the lottery prize of taxpayer dollars. The lesson to voters and citizens is: you cheat, you win. Thank you very much, Arne Duncan and the federal Dept. of Education.
Hey if the shoe fits, wear it! And the Charters fit that shoe! You should check out some very interesting websites and follow the money trail!