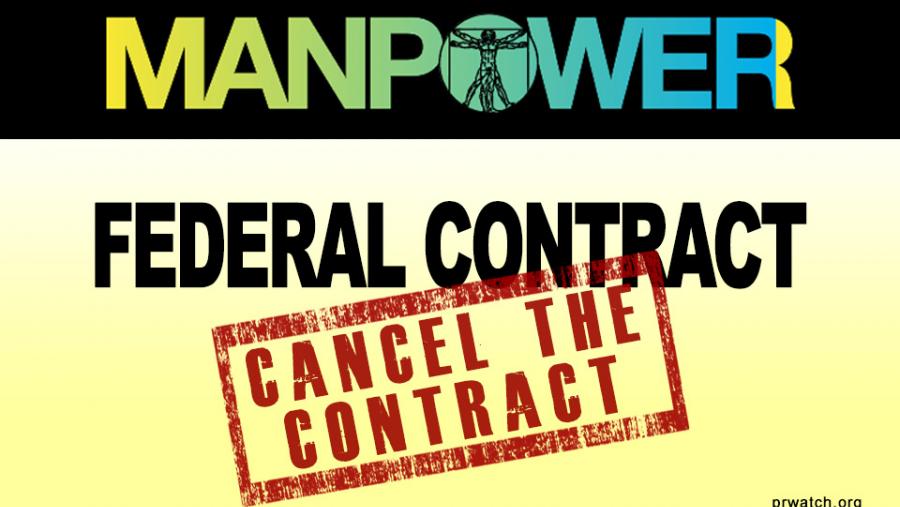 In 2013 a U.S. Senate committee exposed the fact that too many federal contractors are violating federal wage laws and health and safety standards, yet continue to profit off of U.S. taxpayers with repeat contracts.

On July 1, 2014, President Obama acted on recommendations in the report and signed the Fair Pay and Safe Workplaces Executive Order "to protect workers, taxpayers, and law-abiding businesses, and to make sure we're getting what we pay for." The order requires federal contract applicants to disclose labor violations from the past three years and it requires federal agencies to take this information into account when awarding federal contracts.

This Labor Day, President Obama's push to hold federal contractors to account for violating federal wage and safety laws is coming under assault from some very big companies, and it comes as no surprise that giant temp firm Manpower is crying the biggest crocodile tears.

The Manpower Model: Pay Less and Pocket the Profits

ManpowerGroup, based in Milwaukee, Wisconsin, is the world's second-largest temporary staffing company (after Switzerland's Adecco). According to its annual report, the company had global revenues of $20.8 billion and operating profits of $3.5 billion in 2014. Across all of its divisions, Manpower reports linking 3.4 million people worldwide to temporary, contract, and permanent positions.

Founded in the 1940s, companies like Manpower and Kelly Services cleverly portrayed temporary work as "women's work" in big dollar advertising campaigns, suggesting that temps were housewives working for pin money. While Kelly Services promoted "Kelly Girls," Manpower spent a whopping $1 million in 1961 to put its "White Glove Girls" in the Sunday issue of big city newspapers. With the help of these gender stereotypes, temp agencies established "a new sector of low-wage, unreliable work" exempt from many of protections workers enjoyed in other parts of the economy, explains Erin Hatton, an assistant professor at SUNY Buffalo writing for the New York Times.

Today, the United States almost 3 million temp workers and a large portion of the growth in jobs since the 2008 financial crisis has been in the temp sector. "Temporary work has become a mainstay of the economy," says ProPublica and temp services firms "are among the largest employers in the United States."

Temp work is also moving higher and higher up the income ladder. One reason why manufacturing jobs in the United States are now in the bottom half of all jobs in terms of pay is an increased reliance on temp workers, says the National Employment Law Project (NELP). According to NELP: "About 14 percent of auto parts workers are employed by staffing agencies," and these workers on average make 29 percent less than those employed directly by auto parts manufacturers.

Only a tiny percentage of temp workers get health care or other benefits and temp workers earn an average of 25 percent less than equivalent permanent workers as the temp agencies pocket the difference. Taxpayers are being asked to subsidize this low-road model when temp agencies provide workers for state and federal contracts.

When the U.S. Senate Health, Education, Labor, and Pensions (HELP) Committee examined the performance of federal contractors in 2013, it did so under the assumption that the federal government had a responsibility to ensure that public contracts go to firms that, at a minimum, are committed to following U.S. labor law.

Yet as the report made abundantly clear, that is not always the case.

"These findings are deeply troubling," Senator Harkin (D-Iowa) said upon releasing the report. "Almost thirty percent of companies with a significant violation of basic labor laws are federal contractors, and tens of thousands of American workers are paying the price--through shortchanged paychecks, with their safety, or, sadly, with their lives."

The report identified Manpower as one of the worst offenders. Between 2001-2012, Manpower was assessed $5.16 million for 38 labor law violations, including paying back wages to more than 7,700 employees at the post office. Yet it was still awarded federal contracts worth $3.8 million in 2012. (Appendix PDF).

One would think being called out by the U.S. Senate would be enough to get Manpower to clean up its act, but the violations have continued. OSHA inspections of work sites staffed by Manpower have found multiple violations since 2013, including incidents like a worker who needed surgical treatment after receiving chemical burns on the job and another who was hospitalized after a welding accident.

Nor has Manpower cleaned up its act when it comes to wage and hour violations. In January 2015 the company agreed to an $8.75 million settlement with more than 20,000 temp workers in the state of California over claims that they weren't paid on time and didn't receive accurate pay stubs.

Yet the company continued to win contracts from federal agencies worth $10.46 million since 2013. Many of these contracts involve outsourcing highly skilled services like computer engineering for NASA and the Department of Defense, not to mention translation services for the FBI.

When the rocket scientists at NASA are being replaced by a repeat violator like Manpower and the sleuths at the FBI are not aware of Manpower's problematic history, clearly the existing machinery for agencies to hold federal contractors accountable is seriously broken.

In July, President Obama signed the "Fair Pay and Safe Workplaces" Executive Order 13673. The order holds federal contractors accountable for wage and safety violations and provides all federal agencies with the data needed to assess a contractors' history in this regard when federal contracts are put out for bid.

The vast majority of federal contractors obey all applicable laws. The rule is geared toward identifying those repeat bad actors, but you would not know this from the intense industry push back. A raft of trade associations are protesting the new rules claiming that the 1938 Fair Labor Standards Act (crafted back when Franklin Delano Roosevelt was president) is "extremely complex," and questioning the meaning of words like "serious, repeated, willful or pervasive," terms that have been part of OSHA parlance for decades. The Executive Order requires firms to cough up three years of federal and state compliance data, a "highly subjective enforcement requirement," complains industry.

One of the key trade associations leading the fight on the new rules is the innocuous sounding HR Policy Association. Trade groups like this one are traditionally used by firms to put a little distance between their brand name and controversial (and self-serving) policy positions. HR Policy Association is working against the president's Executive Order and complaining that the new rules are geared toward "blacklisting" companies.

But a little digging shows that Manpower executive Mara E. Swan is on the board of the trade association. Ms. Swan, who is Executive Vice President of Manpower's Global Strategy and Talent Division, made $2.98 million in executive compensation in 2014 while she pushed back on the worker protections contained in the Executive Order. Her boss, Manpower Chairman Jeffrey A. Joerres, made $11 million in 2014.

In truth, President Obama's Executive Order requires Manpower to man-up, pay workers a fair wage, follow all applicable health and safety standards, and wipe away those crocodile tears. If Manpower cannot agree to these conditions, maybe its contracts need reconsideration.

Reason to Celebrate this Labor Day

In addition to his executive order on federal contractors, President Obama signed an Executive Order on February 12, 2014 establishing a minimum wage for federal contractors at $10.10 an hour. Also in the works is an Executive Order that would require any company that contracts with the federal government to guarantee paid leave to employees who are sick or caring for an ill child or relative.

These rules raise the floor and lift expectations not just for federal workers, but all people in the workforce. In other words, President Obama is taking what steps he can, in the face of widespread GOP opposition, to make sure that taxpayer dollars are used to sustain and not undermine higher wages and reasonable benefits for American workers.

That is something all workers can applaud this Labor Day.