Shell Parts Ways with ALEC over Climate Change, Exodus at 106 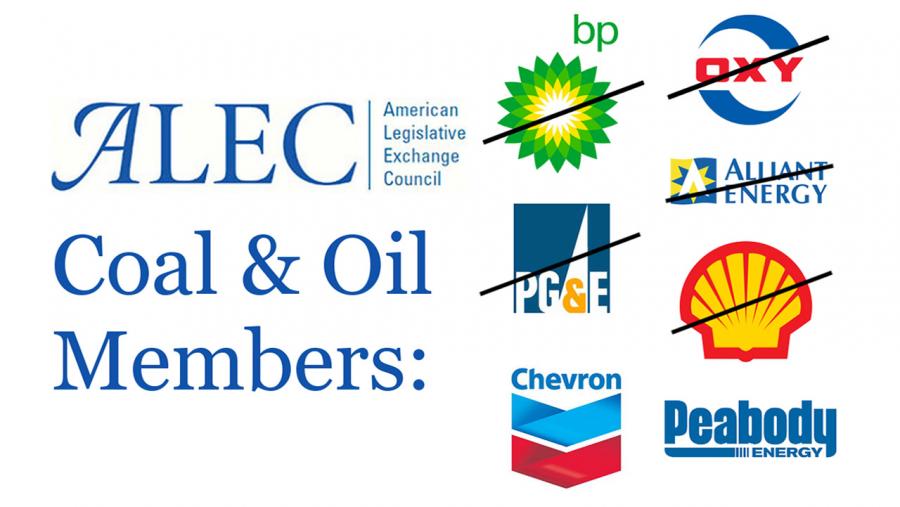 Royal Dutch Shell announced Friday that it planned to let its membership in the American Legislative Exchange Council (ALEC) lapse early next year, explicitly citing the organization's stance on climate change. The last oil company to cut ties with ALEC was BP in March 2015.

In a statement, a Shell spokesperson said, "ALEC advocates for specific economic growth initiatives, but its stance on climate change is clearly inconsistent with our own." The decision will make Shell the 105th corporation to cut ties with ALEC. Headquartered in the Netherlands, Shell is one of the largest oil companies in the world, with revenues of $421 billion in 2014.

The Guardian also reported today that Canadian National Railway (CNR), headquartered in Montreal, has ended its membership in ALEC, bringing the total number of companies to have abandoned the controversial organization to 106. CNR, a major transporter of coal, has not made a public statement regarding its decision.

Shell has been under pressure to cut ties to ALEC over the organization's role in promulgating climate science denial in direct contradiction to Shell's own official position. In 2014 Google chair Eric Schmidt accused the organization of "literally lying" about climate change and quit ALEC, prompting an exodus of high-tech firms.

ALEC, whose funders are dominated by dirty energy companies, has long offered workshops by "experts" who deny climate science. The group has promoted model bills that to roll back renewable energy and block President Obama's Clean Power Plan geared toward reining in carbon pollution. Most recently, the Washington Post reported that ALEC adopted the Environmental Impact Litigation Act, which would allow private corporations, including fossil fuel interests, to fund state litigation against environmental policies like the Clean Power Plan.

In contrast, a Shell spokesperson told the Washington Post in 2014, "Let me [be] very very clear, for us climate change is real and it's a threat that we want to act on. We're not aligning with skeptics."

David Anderson of the Union of Concerned Scientists, which played a leading role in the campaign, called the decision a "big win" and thanked the 130,000 people who signed a petition calling on Shell to stop funding ALEC.

Shell’s leadership has recognized that the company’s membership in ALEC is at odds with its acceptance of climate science. We’re happy that they’ve responded to scientists and investors who have been urging Shell to sever its ties with ALEC. It’s simply untenable for companies to ask policymakers to adopt a carbon price while supporting groups that fight climate and clean energy policies and spread misinformation about climate science. If other fossil fuel companies want to be taken seriously when they say they support action on climate change, they should do the same.

While today's announcement marks another win against ALEC's climate denial, activists are likely to keep the pressure on Shell, which has been ramping up its Arctic drilling. Just last week, a Shell icebreaking vessel was briefly stopped from leaving Portland, Oregon when dozens of "kayaktivists" and rappellers blockaded the Columbia River in a protest organized by Greenpeace.

As CMD Director of Research Nick Surgey told The Guardian, “It’s obviously a positive step for Shell to stop funding ALEC and its climate change denial. Other oil companies should join them. Unfortunately this is another occasion when Shell’s positive language about climate change doesn’t match their actions. Drilling for oil in the Arctic might turn a profit for Shell, but it must be stopped if we want to avoid catastrophic climate change."

Would you peace loving liberal climate blame "believers" be willing to make yourselves available for criminal charges for uttering your CO2 death threats to our children when the courts rule climate change couldn't be proven or disproved? *Occupywallstreet now does not even mention CO2 in its list of demands because of the bank-funded and corporate run carbon trading stock markets ruled by politicians.
Am I reading something from the Onion?