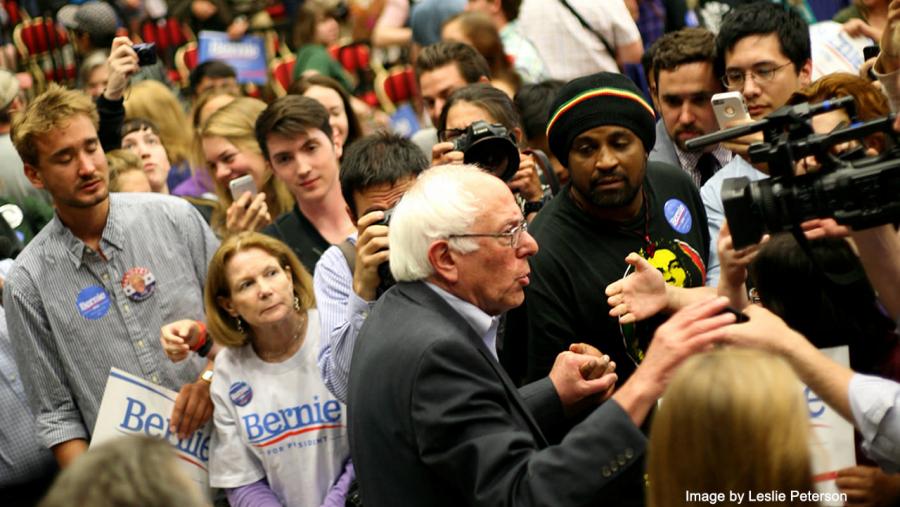 It was the largest political rally for any candidate in the 2016 run for the White House so far.

Sanders’ arrival in the state was greeted by the Wisconsin GOP with billboards and a website characterizing Hillary Clinton and Sanders as "left and lefter" and slamming Sanders for "extreme" policies. An amused Sanders had a sharp response.

From his campaign kick-off in Burlington with a crowd estimated at 5,000 to the 5,500 who came to see him in Denver, Sanders has been drawing consistently large crowds. Campaign aides were particularly pleased about an event in Kensett, Iowa, population 266, where Sanders drew 300.

In comparison, on June 4, Scott Walker spoke to 150 people at the Buckhead Hotel in Georgia. On June 29, Jeb Bush spoke to around 100 employees of the Nephron Pharma Company in South Carolina. On June 25, Marco Rubio spoke to a crowd of 200 in Salem, New Hampshire. Hillary Clinton drew an estimated 5,000 for her Roosevelt Island kickoff and 2,000 in Fairfax, Virginia last week at a Democratic Party fundraiser.

Sanders’ hour-long speech in Madison touched on many topics, but again and again Sanders returned to the theme of an economy and a democracy captured by Wall Street that fails to meet the commonsense needs of working families.

On Wall Street: "In my view it is time to break up the largest financial institutions in this country. Wall Street cannot continue to be an island unto itself, gambling trillions while expecting the public to bail it out. In my view, if a bank is too big to fail it is too big to exist."

On Democracy: "The Koch brothers alone, the second wealthiest family in America, want to eliminate Social Security, Medicare, Medicaid… This one family will be spending close to one billion dollars this election cycle, and their job is to elect candidates to make the rich richer and everyone else poorer. When you have one family spending a billion, more than the Democratic or Republican parties, this is not democracy; it is oligarchy and we will not have it."

On Trade: "You are looking at a Senator and a former Representative who voted against NAFTA, against CAFTA, against permanent normal trading relations with China, and I will do everything I can to defeat the disastrous TPP," a reference to the Transpacific Partnership trade agreement being negotiated behind closed doors by the Obama administration and 12 Pacific Rim countries.

On Wages: "But the issue of our economy is not just income and wealth inequality. It is the issue of the tragic reality that the great middle class of America has been disappearing. Federal minimum wage is a starvation wage, which must be raised. The minimum wage must become a living wage, which means $15 bucks an hour." "A living wage should be fair, it should be equitable. There is no excuse for a woman making 78 cents on the dollar."

On Families: "Today 85 percent of working men, 66 percent of working women work more than 40 hours a week. We are not beasts of burden. We want time with our families." "Let me tell you about my family values. I have 4 kids, 7 beautiful grandkids. My wife is here and we have been married 27 years. I believe that the U.S. must end the international embarrassment that we are on the only developed country on earth that does not guarantee paid family and medical leave, that does not guarantee paid sick days or guarantee vacation time."

A Youth Movement for a 73-Year-Old-Candidate

The crowd cheering on the grey-haired Sanders, who has served in Congress since 1991, was packed with young people from across the state.

Jordon White (23) drove in from Waupun, Wisconsin. "My family doesn’t know who Bernie Sanders is, but I am here because he shares my values. He cares about civil liberties, he fought against the Patriot Act. These are issues that are very important to me," said White.

When Sanders proposed that all public colleges and universities be free, "that really got my attention," said White. "I personally am drowning in student debt."

Gaby Pavovano (19) drove all the way from Fond du Lac. "I like the way he is real about stuff. I like the way he calls things out," she said. "The fact that the GOP is giving tax breaks to millionaires when kids are starving is really a problem," she said.

Sophie Rogers (25) told CMD that she was voting for Sanders because he cares about "worker dignity." "He cares about the things I do, a 40-hour work week, family and medical leave, and a higher minimum wage," said Rogers, who lives in Madison.

Sanders left the state on his way to Rochester, Minnesota with a challenge for the crowd: "This is a rigged economy and, brothers and sisters, we are going to change that. ... The greed of corporate America and the billionaire class has got to end, and we are going to end it for them."

See a video of the speech. This reporter has contributed to Sanders in the past. Photo credits: Leslie Peterson and Eric Tadsen.