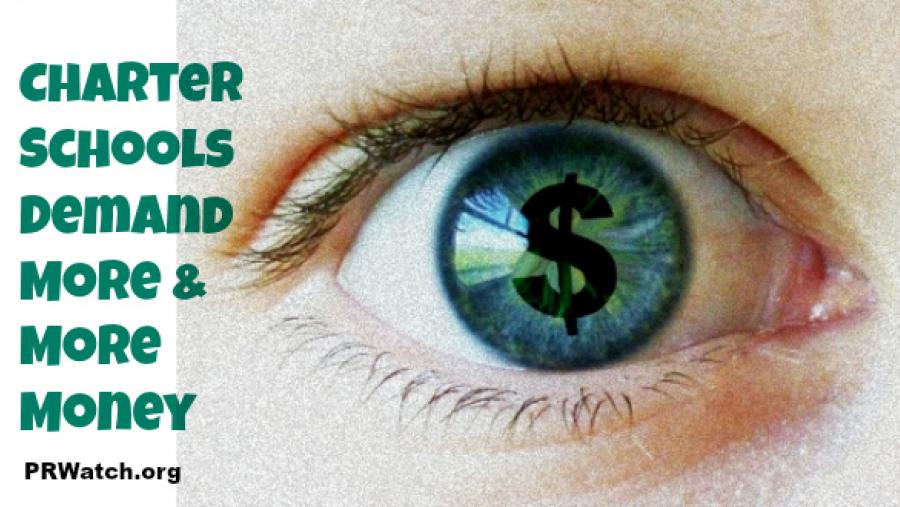 The U.S. Department of Education (ED) has pledged to tighten controls of its quarter-billion-dollar-a-year charter schools program—a program repeatedly criticized by the Office of the Inspector General (OIG) for waste and inadequate financial controls, as CMD has helped document in this special report series.

Just last year, ED required that states applying for grants in 2015 submit a plan on how they are going to hold charter schools and their authorizers accountable. This provision made its way to a bipartisan bill, introduced in April this year by Senators Patty Murray (D-WA) and Lamar Alexander (R-TN), which requires that states explain how authorizers are held accountable when applying for funding. But as long as their applications are primarily evaluated based on how little control they have over the charter schools, paying lip service to accountability is unlikely to stem the flow of millions going into corporate coffers with no public disclosure.

The tally of charter school fraud, aided and abetted by the "flexibility" promoted by ED, stands at $200 million in 15 states alone—a figure that is likely just the "tip of the iceberg," as the Center for Public Democracy pointed out in a 2015 report. And worryingly, the new "accountability" provision is likely to prove just as toothless as prior pledges to the same effect.

In fact, state applications, as CMD has shown, have literally received the highest possible marks for a putative commitment to holding charters accountable despite the fact that they had no authority whatsoever to monitor charter schools spending.

This Orwellian formula in which no accountability translates to full accountability (and the highest score possible) can be chalked up to the fact that ED recruits its reviewers from within the charter school industry—an industry that has been fighting tooth and nail to dismantle even the semblancce of safeguards.

State oversight, charter school advocates argued in dozens of public comments to the new 2014 rules, is anathema to the idea of charter schools. But they failed to mention that this "idea," which is taken straight out of the ALEC playbook, lends itself to fraud and waste.

Charter Schools Use Their Growing Power to Push Back on Controls

Here is a snapshot that reveals how charter school associations, authorizers, and state departments of education divisions captured by pro-charter advocates have reacted to federal efforts to seek more accountability:

CMD’s open records requests to states have resulted in some illuminating exchanges illustrating how charters and their authorizers are flexing their muscle with state authorities in an effort to wrest even more power from the hands of politically accountable officials.

How much public money underwrote the Academy’s lobbying—or that of other charter operators—to prevent regulation of how public money is spent is unknown.

They had no means to actually process and pay a payroll. The CCSP Grant that had been approved is a reimbursement grant and they only had $1,000 +/- in the bank.

They had not applied-for a Colorado Tax ID.

They had not applied-for a Colorado Unemployment Insurance Account.

They did not have an Employers Liability (Workers Comp) Insurance Policy.

The Grant Manager with the Colorado Department of Education replied that this “is not typical or appropriate,” and went on to send an email to the Colorado League of Charter Schools as “potential feedback … to consider for your quality criteria document.“

The program manager with the Colorado League of Charter Schools wrote back, demanding that she “rescind the statement …  ‘you are right that the arrangement you outlined below is not typical or appropriate.’”

She went on to say that the business manager was let go for mismanagement, and that he was the one in charge of implementing the processes he complained of.

She later added: “some of this may not be out of the ordinary, especially depending on the exact wording that covers these areas contractually. Charters are always so interesting!”

Charters are more than “interesting.” The anti-regulatory environment surrounding their operations and the lack of real consequences for a stunning array of unaccountable spending of public tax dollars are astonishing and must be reformed.

CMD's review of audits and open records material reveals a deep fault line between, on the one hand, the pious pledges by lawmakers and the U.S. Department of Education that charter schools and their authorizers be held accountable, and, on the other hand, the reality on the ground.

The charter schools program was not designed with accountability and transparency in mind. Quite the contrary. It was created to provide incentives for states to create a separate system of schools that are exempt from state oversight, and do not answer to locally elected school boards. States are judged based on how much "flexibility" charter achools and authorizers are enjoy. It is true that they must also pay lip service to "accountability," but this rubric is rubber stamped by reviewers recruited from within the charter school industry. And once a state has been awarded tens on millions, it is then monitored for compliance by a company with close ties to the charter industry.

Patchwork provisions did not change things in the past; they are unlikely to do so now. Until the charter schools program receives a complete ovehaul, a moratorium on charter funding—rather than a 48 percent increase—is warranted.

This is the fifth instalment in a CMD special report on waste and lack of accountability in the quarter-billion-dollar-a-year federal chart schools program. Click here for part 1, part 2, part 3 and part 4. This serialized version expands on the original report as new findings have come to light.