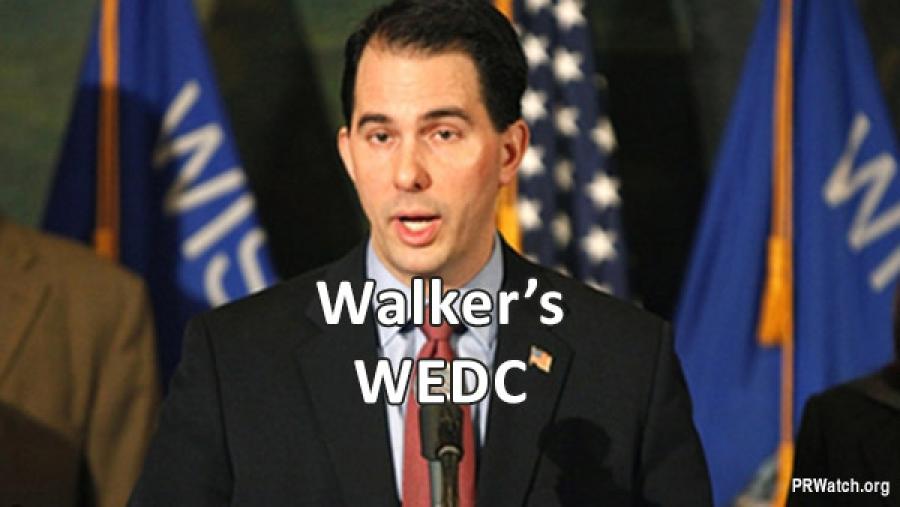 The Center for Media and Democracy is pleased to tell its readers that Molly Regan has received the 2016 "Whistleblower of the Year" Award from the Wisconsin Freedom of Information Council. This former state employee quit her job over concerns about questionable practices at the Wisconsin Economic Development Corp. (WEDC), the jobs agency created by Governor Scott Walker in 2011.

In 2015, Molly talked to CMD's Mary Bottari about a range of problems at WEDC and helped us determine that WEDC had only created 5,840 jobs when it was boasting 60,000 in the official records. Our article, published at the Capital Times, was followed by a highly critical state audit focused on WEDC's jobs numbers. Another of our articles on the jobs issue and questionable loans handed out by WEDC was printed in the Progressive magazine. Molly also worked with the Wisconsin State Journal on an award winning series on how top state officials in Governor Walker's office and at the Department of Administration pushed for a failed $500,000 loan to a struggling construction company, spurring new safeguards on how agency dollars are spent.

Regan told the State Journal's Matt DeFour: "I hope my coming forward results in real, meaningful changes in the way economic development programs in the state are administered because people in Wisconsin, especially those who are struggling financially, who have a legitimate need for government assistance, or who are unemployed, deserve better."

CMD congratulates Molly Regan on this well-deserved honor and thanks her for her nonpartisan advocacy on behalf of Wisconsin taxpayers and the public interest.

Below we reprint one of the articles.

During the 2010 campaign for governor, Scott Walker famously promised to create 250,000 jobs in his first term.

Toward this end, one of his first acts as governor was to privatize the state’s economic development agency. Wisconsin Economic Development Corporation (WEDC) opened its doors in July 2011. After a series of damning audits, which highlighted mismanagement and incompetence, and news reports of special treatment for Walker donors, on Monday Democratic state lawmakers called for a federal investigation of the scandal-plagued entity.

Walker Is Chairman of the Board

When Walker created WEDC in 2011, he named himself Chairman of the Board.

Although it was a privatized agency, WEDC was in charge of a staggering amount of taxpayer dollars: $519 million in bonds, grants, loans, and tax credits in 2011-2012 alone, and the WEDC board is ultimately responsible for those dollars. While experts debate the role state government plays in job creation, one set of jobs Walker can more precisely lay claim to are those created by the economic development corporation he governs.

In 2012, the Milwaukee Journal Sentinel broke the story that WEDC had lost track of $12 million in loans because it never asked businesses to pay back them back. The federal housing authority demanded changes at WEDC after determining it had spent some $10 million in federal funds without authorization. A damning 2013 audit by Wisconsin’s professional, nonpartisan state audit bureau made headlines when it documented dozens of ways in which the new agency was breaking the law. The audit showed that WEDC made awards to ineligible recipients, for ineligible projects, and for amounts that exceeded specified limits.

WEDC promised to clean up its act and reported to the legislature and the state audit bureau in October 2013 it had addressed all the concerns raised in the May 2013 audit.

But a new May 2015 state audit shows the situation is even worse.

In 2014, the Center for Media and Democracy (CMD) spent weeks analyzing data and determined that for a two-year period (FY 2012 and FY 2013), WEDC could only lay claim to creating some 5,860 jobs. During the same period, the agency misled the legislature and the public by claiming to have created 60,000 jobs. Instead of counting the “actual” jobs created, the agency used the cooked-up phrase “impacted.” CMD's report documented how jobs lost to plant closings in the state over the same period (13,616) trumped the job creation numbers.

Now we know why.

In one instance, WEDC executed a $4 million contract and allowed $1.6 million of it to be used for debt repayment. WEDC would not answer CMD's inquiries on the topic. From a check of the WEDC data base, this grantee appears to be SHINE Medical Technologies of Monona, who pled "business sensitive information" and would not comment further on the issue. In another instance, WEDC gave a business $517,000 in tax credits for “retaining” jobs even though it determined that the business employed 307 fewer eligible employees than a year earlier. A check of the WEDC database finds Plexus Corp. of Neenah recording a 307 job drop.

On the jobs numbers, the audit gives us an update on the 5,840 CMD previously recorded.

And auditors had little patience for the numbers game, noting incredibly that "some information that should remain constant, such as expected results associated with contracts in previous years, changed in the online data from one year to the next." Auditors pointed to one mysterious 607 drop in expected jobs.

Shar Habibi, Research Director for In the Public Interest, a nonprofit group that studies the impact of privatization, told CMD: "Substantial time and trained personnel are necessary to monitor contracts to make sure taxpayer dollars are not being wasted. Like other privatized economic development authorities, WEDC has failed to provide the transparency needed to hold contractors accountable to their failure to create jobs. Without the professional staff at the state's audit bureau, these abysmal findings may never have come to light."

Habibi also noted that Walker has a history of failed privatizations reaching back to his time as Milwaukee County Executive.

In 2009, Milwaukee County Executive Walker declared an economic emergency and used his special authority to lay off the union security workers at the county courthouse. He then replaced them with Wackenhut officers at a time when the firm was already under heavy criticism for failing to protect the public while patrolling the Milwaukee transit system. In 2011, an arbitrator reversed Walker’s outsourcing of courthouse security and the county ended up having to cover back pay for the wrongfully laid off union workers, costing taxpayers an extra $430,000.

The audit examined WEDC’s management of $88 million in tax credits.

But the standout finding of this audit is that in 36 of the 42 contracts examined, WEDC allowed recipients to earn tax credits for projects that began before the contracts were executed. CMD had noted this trend when it wrote about WEDC in 2014, but the audit shows that the problem is systemic. Auditors conclude that 14.9 percent of jobs were created before WEDC executed contracts with recipients.

"This looks like 'parade jumping,' when politicians pay companies to do what they were going to do anyway--or in this case, to do what they've already done. It suggests the state wants to take credit for free market forces instead of addressing so-called 'market imperfections' such as the credit crunch still plaguing small businesses," said Greg LeRoy, executive director or Good Jobs First, a non-profit research group based in Washington, D.C.

The auditors were so surprised to have their 2013 recommendations ignored that they took the unusual step of recommending the legislature make it crystal clear that 1) all tax credit recipients must be required to increase net employment in the state, 2) tax credits cannot be allocated for activities that occur before contracts are signed, and 3) auditors suggested it was now time for the WEDC board to take responsibility for reporting to the public the actual numbers of jobs created and retained.

Writing Off Loans for Campaign Contributors

In case you think the audit is all negative, it's not.

WEDC did reduce the amount of loans past due. $5.5 million in past due loans were decreased by a whopping $4.2 million in 2014. But the privatized corporation achieved this by amending 13 loan contracts to defer payments, writing off 9 loans entirely and forgiving 2 others.

One $500,000 unsecured loan that was written off was a bad risk from the get-go. WEDC approved the loan in 2011 even though the recipient firm was dragged into court for failure to pay its bills in 2010. Plus, the contract did not require that any jobs be created at all. CMD was the first media outlet to flag this problem loan, disclosing that it was made to Walker donor Bill Minahan, owner of Building Committee, Inc. After it got the loan, the firm racked up $757,103 in judgments and liens.

The Wisconsin State Journal recently took a deep dive into this loan, documenting that it came shortly after Minahan gave Walker a $10,000 contribution and linking it to Walker chief of staff Keith Gilkes and Mike Huebsch, Walker’s second-in-command as the head of the Department of Administration. In a separate article, the State Journal spoke to one unnamed employee who said that Minahan offered to reimburse him for making political contributions, a practice banned by Wisconsin law.

On the day the audit came out, Walker abandoned his effort to merge WEDC with the Wisconsin Housing and Economic Development Authority in the new budget.

One week later, and on the same day that WEDC released information about the failed BCI loan to the Wisconsin State Journal, Walker advanced the damage control by recommending to the legislature that they ax the $17 million WEDC grant program and the $19 million WEDC loan program.

Yet Walker continues to defend WEDC in public. This past weekend at the state Republican convention, Walker said of WEDC: "It's been highly effective. That's something that's been consistent throughout all the discussion."

But many in Wisconsin aren’t buying it.

In May 2014, One Wisconsin Now ran the numbers on WEDC loans and found that nearly 60 percent of some $975 million in assistance distributed by WEDC since 2011 went to firms that had contributed to Walker or the Republican Governor’s Association.

"This new audit confirms that WEDC is the embodiment of the cronyism, corruption and incompetence of the Walker administration,” One Wisconsin Now’s Scot Ross told CMD.

In 2012, The (New York) Times analyzed more than 150,000 awards and created a searchable database of incentive spending. Here is the actual web address of the database: http://www.nytimes.com/interactive/2012/12/01/us/government-incentives.html $80.4 billion in incentives each year (YES, each year!) 1,874 Number of programs
Government fails as a free market impostor. Words escape me. What is it called when the government is the largest: employer, consumer, lender, borrower, landlord and tenant in ever economy in the world? Is that more free markets?
Government's job is not 'job creation.' It is property management for the public good.
It was nothing but a front for filtering money 2 his corporate supporters. Thanks Scott Walker for wasting our taxpayer dollars. You're a criminal and you should be prosecuted