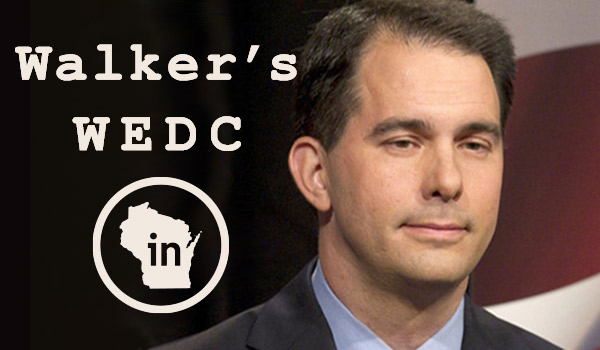 The governor’s race in Wisconsin between the Republican incumbent, Scott Walker, and his Democratic challenger, Mary Burke, is coming down to one issue: jobs, jobs, jobs.

This summer Walker launched aggressive ads against Burke, charging that her family’s giant bike company, Trek, had outsourced jobs, an unusual line of attack for a pro-trade Republican who once sported a Chinese-U.S. flag pin. The Walker camp also dug out a failed economic development grant from the time she was the head of the state Department of Commerce.

The Walker team is cleverly trying to hit Burke where Walker himself is most vulnerable. It was not Burke who bungled a promise to create 250,000 jobs, then presided over one of the worst jobs creation records in the region. It was not Burke who created a scandal-plagued jobs agency, which has come under fire from federal officials and state auditors.

In November 2010, Scott Walker was elected governor of Wisconsin on his jobs pledge and on his slogan to make Wisconsin "open for business."

On January 3, 2011, Walker was sworn into office and immediately called the legislature into a special session to get to work on his jobs agenda. One of the first bills Walker introduced privatized the Department of Commerce’s economic development functions. Walker made himself the chairman of the board of the public-private hybrid, the Wisconsin Economic Development Corporation (WEDC).

In July 2011, the legislature launched the agency with a portfolio worth hundreds of millions of dollars, including loans, grants, and bonding authority. As a privatized agency, WEDC was designed to operate with less transparency, less oversight, and "greater flexibility" to "more effectively and efficiently assist Wisconsin business." WEDC created a four-year strategic plan "with the mission of elevating Wisconsin’s economy to be the best in the world.

But the agency was soon embroiled in controversy. In May 2012, the federal Department of Housing and Urban Development slammed WEDC for misusing $10 million in federal funds. Those grants were taken away from WEDC and are now managed by Walker’s second in command, Department of Administration Secretary Mike Huebsch.

In July 2012, allegations of bid-rigging forced the agency to cancel a planned award to an information systems company called Skyward. On October 18, 2012, the Milwaukee Journal Sentinel reported WEDC had also failed to track an estimated $8 million in state loans to ninety-nine businesses. WEDC had no explanation for why it had failed to follow up on the loans, but soon the number swelled to $12.2 million.

Things got worse. The Wisconsin Legislative Audit Bureau found that WEDC had awarded some grants, loans, and tax credits to ineligible recipients, for ineligible projects, and for amounts that exceeded specified limits. This is auditor language for "broke the law".

One audit uncovered improper expenditures, including $1,789 for six season tickets to UW-Madison football games for the governor’s office and $1,190 for UW-Madison Memorial Union Terrace chairs. The organization’s policy of handing out credit cards and iPhones to staff like candy came under fire from the right and the left.

As the bad news poured in, Walker vowed that he would remain "laser-focused on moving our state forward, getting people back to work."
After all that bad press, Walker’s privatized jobs-creation agency was supposed to get its act in gear, track down those loans, and put its nose to the grindstone. That is not what happened.

WEDC says it still has thirty-five delinquent loans, with a principal balance of $8 million as of August.

One unsecured, delinquent $500,000 loan did not require that any jobs be created at all. That loan was made to Bill Minahan, owner of Building Committee, Inc. WEDC approved the loan even though the firm was dragged into court for failure to pay its bills in 2010. Sources say that the underwriters did not think the loan was a great idea, but were overruled by higher-ups. It is unknown why these officials thought Minahan was such a good risk, but he was a Walker donor, giving $10,000 in 2010.

After receiving the $500,000 loan, Building Committee, Inc., racked up $757,103 in judgments and liens, leaving taxpayers with little hope of recovering the money.

We made every effort to reach the company and Minahan, but all publicly available phone numbers had been disconnected.

WEDC’s board is required by law to set performance goals for each of its many economic development programs and to report to the legislature on "expected" vs. "actual" job results, but the WEDC board tossed those precise terms by the wayside and created a new term: "impacted." This term combines "expected" and "retained" and allows WEDC to avoid reporting the actual number of jobs it has created.

"I am not aware of any other state that uses the term ‘impacted’ in this way," says Greg LeRoy of the national nonprofit group Good Jobs First. "It is a vague and not very meaningful measure."

But the reality is that for those two years, our analysis of WEDC data shows that as of April, only 5,840 actual jobs were created. These jobs were self-reported by the firms to which WEDC gave assistance. In many instances where firms were required to create jobs, no jobs have been recorded. To create the 5,840 jobs, some $203 million in taxpayer money went out the door in grants and loans.

In the same two-year period, plant closures and layoffs added up to 13,616 jobs lost in the state, according to data from the state Department of Workforce Development. That’s more than two jobs lost for every job gained.

Of course, most Wisconsin companies have not needed the state’s help to create jobs. As of June 2014, Wisconsin has slowly gained some 112,000 jobs since Walker took office, well behind the national average and ninth out of ten Midwestern states.

But what percentage of those jobs can Walker personally take credit for? Certainly the meager 5 percent of those jobs created by his flagship agency.

"At a time when so many hard-pressed Wisconsin families are struggling to find good jobs, our limited economic development dollars are a vital public resource," says Robert Kraig, executive director of Citizen Action of Wisconsin. "WEDC is a failed model that is literally squandering economic opportunity in Wisconsin."

There are many theories about why WEDC is not creating jobs. Some cite incompetence. Investigators at WKOW-TV found grants were given to companies that promptly laid off workers and offshored jobs. As soon as this news broke, Walker’s campaign began running ads attacking Burke for offshoring.

Politics may be another reason. Earlier this year, Citizen Action released a study showing that the agency was not targeting areas of the state in need of jobs, but was disproportionately aiding Republican Assembly districts. The group One Wisconsin Now produced a report drawing connections between Walker contributors and WEDC grants.

One insider talked to us about her experience at WEDC. Molly Regan was WEDC’s chief compliance officer from June 2012 to February 2013. Previously she had worked for the nonpartisan and highly respected Wisconsin Legislative Audit Bureau.

Regan gave new insight into how WEDC had "lost track" of so many millions of taxpayer dollars. "My understanding is that staff was directed to stop sending reminder letters," said Regan, after one letter had mistakenly been sent to a firm that was not past due and WEDC did not want to risk offending any other CEOs.

From the get-go, Regan said she ran into problems simply doing her job ensuring that all rules and regulations were followed.

For instance, in February 2013, WEDC spent $11,000 on Apple iPad Minis for site selectors. (Site selectors are private parties that help firms search for good places to locate their businesses.) To pay for these gifts, WEDC solicited corporate contributions from registered lobbyists and firms represented by lobbyists.

When Regan questioned the legality and propriety of this solicitation of corporate funds, she was told by WEDC legal counsel it was a "done deal." And the CEO told her it was not an issue for compliance to worry about, she reports.

When she approached the WEDC vice president who approved the expenditures, she says the list of receipts was plucked from her hands: "I don’t know how you got this," the official said. "I am just going to take it and shred it." When she complained about this incident to WEDC legal counsel, she was chastised for not "trusting" her co-workers. Regan submitted her resignation that day.

Reflecting on what went wrong at WEDC, Regan points to the prevalent attitude there of serving Walker’s needs and the needs of his top lieutenant, Mike Huebsch.

I was once told by an administration higher up, 'We have one customer, and our job is to make him look good. . . . Huebsch is the prince, Walker is the king.'

The problem is, the emperor has no clothes.

A version of this article was originally published in the September 2014 issue of The Progressive magazine at the initiative of the Center for Media and Democracy.