With Sanders in the Race, Clinton Can't Dodge Trade 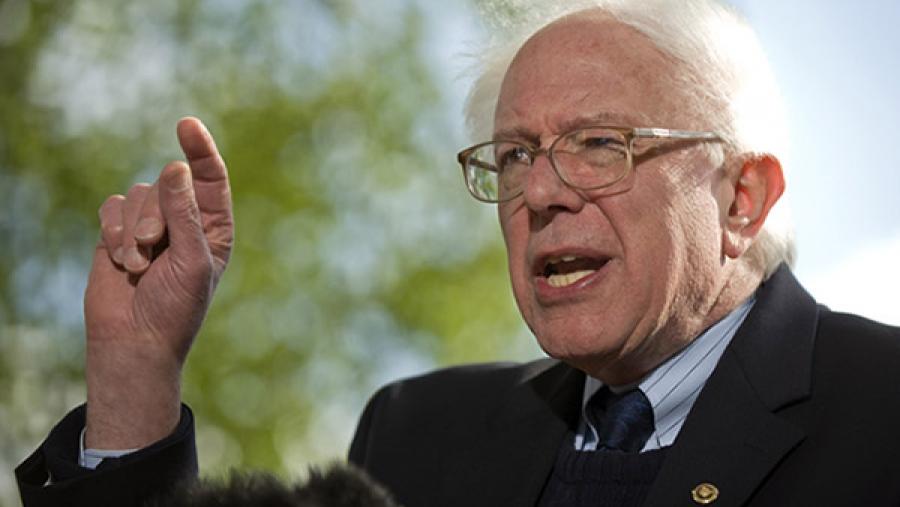 New data out today indicates that the U.S. trade deficit has swelled to the highest level in more than six years. This flood of imports robs American workers of jobs and saps the economic recovery. Yet President Obama is escalating pressure on Congress to approve “Fast Track” trade authority, which would limit Congressional debate on major trade agreements and speed their approval.

In a field of White House hopefuls who are busy raising money from deep-pocketed special interests and expertly dodging the press, U.S. Senator Bernie Sanders stands alone in his single-minded focus on the economy. His blunt talk on jobs, rising inequality, and the erosion of the middle class will force many White House hopefuls to address topics they would rather avoid, including the most important economic vote of our times on Fast Track trade.

Pushing Hillary to Take a Stand

On April 17, shortly after the Fast Track trade bill was introduced in Congress, Sanders challenged candidates for the White House to take a stand on the bill and on the two pending trade agreements, the 12-nation Trans-Pacific Partnership (TPP) and the Transatlantic Trade and Investment Partnership with Europe. He was slated to go on The Ed Show on MSNBC later that day, whose host, Ed Schultz, has been crusading against the pending agreements as job killers in a weak economy.

But before the two trade skeptics could start their discussion, Clinton aides put out a statement: “Any new trade measure has to pass two tests: First, it should put us in a position to protect American workers, raise wages and create more good jobs at home. Second, it must also strengthen our national security.”

The statement not only sounded strong, it set a remarkable new standard for trade agreements: raising, not lowering U.S. wages. Unfortunately, it didn't answer the challenge. Is Clinton for this Fast Track bill? And is she for or against Fast Track and the TPP which would put U.S. workers in direct competition with workers in Vietnam whose average wage is .75 cents an hour?

When asked about Clinton's comments, Sanders was quick to reply on CNN: “I read Senator Clinton's statement, she has to be clear … You have to determine which side are you on. Are you on the side of working people–the people who have suffered as a result of these disastrous trade agreements and seen their jobs go to China and Mexico–or are you on the side of corporate America? … It’s not a difficult choice.”

With opposition building in Congress and rhetoric flaring, President Obama flatly called Elizabeth Warren “wrong” on trade and slammed MSNBC for its coverage, it won’t be long before Clinton will be forced to take a stand. "The fact is, the president needs her help in order to get Democrats, those in the House and Senate, to get this passed," House Speaker John Boehner said on Meet the Press this weekend.

NPR has detailed Clinton’s long history of contradictory statements on trade, but some of these contradictions had to do with her position at the time.

President Bill Clinton fought a bruising battle to pass NAFTA in 1993 against a wall of opposition in a Democratic Congress. Predictably, first lady Hillary lent her support and in 1996, she trumpeted NAFTA as "proving its worth." It would have been remarkable for her to split with her husband over trade, just as it would be remarkable for her to split with President Obama over promotion of the TPP while serving in the cabinet as his Secretary of State.

The best test of her views on trade are her votes as U.S. Senator. Between 2001-2009, she voted for every trade deal but one; voting in favor of free trade agreements with Singapore, Chile, Australia, Morocco and Oman. She also voiced support for the 2007 Peru FTA. But in 2005, she voted against the Central American Free Trade Agreement, or CAFTA.

As recorded in the Congressional Record, she cited multiple problems with CAFTA, including provisions favoring U.S. pharmaceutical companies that make it more difficult for developing countries to make and distribute life-saving essential medicines. These same provisions have only been made worse in the TPP, as Doctors Without Borders explains: “If the TPP is passed as it stands, it will go down in history as the most harmful trade agreement for access to medicines ever.”

In her 2014 book Hard Choices, Clinton also expressed doubts about the controversial “investor-state” provisions in trade agreements that allow corporations to directly sue governments for cash damages over health, consumer, environmental and labor protections that they believe harm their profitability and brand. Clinton wrote, “we should avoid some of the provisions sought by business interests, including our own, like giving them or their investors the power to sue foreign governments to weaken their environmental and public health rules, as Philip Morris is already trying to do in Australia.”

On this issue, Clinton now appears to stand with Sanders and Senators Elizabeth Warren and Sherrod Brown who have consistently condemned these secretive corporate courts that operate outside the U.S. justice system. How U.S. firms like Phillip Morris/Altria use these provisions to browbeat the third world into accepting their deadly products was brilliantly highlighted by satirist John Oliver recently. (See the video here.)

But does she feel strongly enough about the agreement to stand with the public, the majority of whom oppose an expansion of free trade, and the majority of Congressional Democrats who are fighting Fast Track tooth and nail?

Investor-State dispute resolution is one of the more wonky reasons to reject Fast Track and the massive trade agreements that will follow. But average Americans understand the most important reason for rejecting the deal, and that is jobs.

Under the leadership of President Bill Clinton, Treasury Secretary Robert Rubin, deputy Larry Summers and White House advisor Rahm Emanuel, the U.S. negotiated and passed three transformative trade agreements: the North American Free Trade Agreement (NAFTA) in 1993, the General Agreement on Tariffs and Trade (which formed the WTO) in 1994, and China PNTR in 1999, which established normal trading relations with China.

The devastation in communities across the country is deep and abiding. In Milwaukee, for instance, black male employment stood at 73.4 percent back in 1970. By 2010, it was 44.7, a drop of 29 percent. Milwaukee used to make giant machines, printing presses, beer and ballbearings. Today, workers try to support their families by flipping burgers.

Even the smaller trade agreements hurt. The data is in on the 2012 U.S. Korea agreement. U.S. goods exports to Korea have dropped 6 percent, or $2.7 billion, in the agreement's first three years, while goods imports from Korea have surged 19 percent, or $11.3 billion. That translates into a lot of lost jobs for American workers.

Sanders speaks to many when he says: "These corporately backed trade agreements have significantly contributed to the race to the bottom, the collapse of the American middle class and increased wealth and income inequality. The TPP is more of the same, but worse."

With Bernie Sanders and latest GOP hopeful Mike Huckabee (who has spoken in opposition to Fast Track) now in the race for the White House and directly addressing this year's critical vote on the future of the American economy, it is only a matter of time before Hillary and the other candidates are knocked off their comfortable fences.

Mr. President and Madam Sidestep, about opening up markets for goods that we produce: The opening of such a market for such goods needs to be in America. The problem being that we no longer produce what we buy, and what there is left for us to produce and sell over there only increase the capacity for them to produce more of what we buy but do not make.. Independent candidate president Ross Perot said in 1992 of to be elected Democrat Bill Clinton’s and outgoing Republican George HW Bush’s NAFTA and of American production and jobs going away, there is going to be a huge sucking sound. Mr. President, your trade deal sucks. This is why I a life-long Democrat am backing another independent for nomination in the Iowa Democratic Caucus, this is Independent Bernie Sanders. My rejection of your trade deal, other things that come out of same-O politics was well expressed by a man named Lucas Tomolonis of Vermont that I know nothing about other than he has well expressed the point of decision at which many liberal Democrats, and progressive Independents and RINO Republicans have arrived: “Choosing the lesser of two evils is still choosing evil. I am done voting for only a slightly different shade of bullsh*t brown from another. This man has the unwavering passion, tenacity, and integrity this country needs to instill real change, not just a smoking mirror of change. I would run into a burning building to vote for Bernie Sanders for president, and I think that a great many others share this feeling.”
I appreciate having a previous comment being quoted on this thread. I speak in truths, and there a great many stark truths are glaring unsympathetically at us, as if to say, "enough is enough."
We are having a rally with six speakers talking about this rigged corporate deal and then marching to the corner of the street where Hillary is holding her first LA fundraiser since announcing her candidacy. LA folks, join us to tell her No NAFTA on Steroids. https://www.facebook.com/events/770410349744056/
Why even MENTION what's-her-name? With Sanders in the race, we HAVE our candidate! Bernie Sanders MEANS what he says, he's consistent and committed to rebuilding American manufacturing and jobs. By contrast, what's-her-name will, like Obama, say whatever it takes to get elected and then do whatever it takes to please Wall Street and the globalized corporations with zero loyalty to the USA. VOTE BERNIE SANDERS!
Sanders' $imply a Stalking Horse for $lick Hilly on the TPP (and TTIP) and her DEM campaign! He didn't FiliBuster or deploy his Senate "secret" 'HOLD' to STOP the TPP in its Obamanable Fast Track (and Neither DID Senator Warren)!! DEM Their ayes!!! US: Quadrangulated into FOOLS a Fourth TIME!!!!