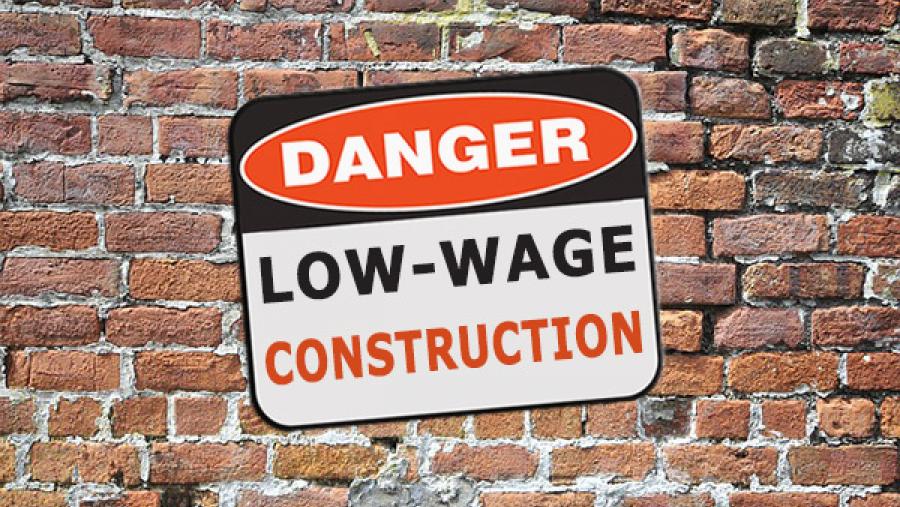 Now that the Wisconsin GOP and its allies have rammed though an American Legislative Exchange Council "right to work" (RTW) bill, the same cast of characters is back pushing another ALEC model: repeal of the state’s prevailing wage laws. These laws require public construction projects to support local wage standards instead of undercutting them.

Who could be against repealing the laws when proponents, such as the Koch-funded Americans for Prosperity, tout mind-boggling savings of $300 million a year for school districts and taxpayers? But the claims are nonsense and the savings a "mirage," say experts. Research using actual data by academics who actually understand construction has consistently shown that prevailing wage laws do not cost taxpayers more because high-skill workers are so much more productive.

Even before RTW was passed, Senate Majority Leader Scott Fitzgerald had let it be known prevailing wage repeal could be the next target. Repealing prevailing wage "will save taxpayers hundreds of millions of dollars each year," says bill sponsor Sen. Leah Vukmir, R-Wauwatosa. Vukmir is on ALEC’s national board, so it is no surprise that the measure is also taken directly from the ALEC playbook.

In February, prevailing wage repeal supporters were touting an Anderson Economic Group study done at the behest of the nonunion construction trade group, Associated Builders and Contractors, in Michigan. Ignoring research that shows comparable per-square-foot public construction costs in states with and without prevailing wage laws and no savings in building costs when prevailing wage laws are repealed, the study simply asserts that Michigan’s prevailing wage law has inflated labor costs by 25 percent and then, naturally, concludes that repeal would save Michigan taxpayers precisely that amount -- $224 million a year. No actual evidence was proffered to support either claim.

But anything Michigan can do, Wisconsin can do better, and so on March 29 a "budget watchdog," the Wisconsin Taxpayers Alliance, released an analysis claiming that labor costs on prevailing wage projects in Wisconsin are 45 percent too high and that the state could save $200 million to $300 million a year with repeal. This study too was bankrolled by ABC, a group that may not want to pay workers well but has had no trouble contributing $80,000 to Wisconsin politicians since 2009.

The study arrives at its blockbuster conclusion by comparing apples to oranges. The "savings" to taxpayers are calculated by comparing prevailing wages paid on the demanding and complex public projects covered by the law to average construction wages recorded by the U.S. Bureau of Labor Statistics. But BLS wages include broad categories of low-wage construction workers, like roofers or those doing small home construction or repair projects. Claiming that new schools, prisons, laboratories, stadiums and other complex public buildings demanding experienced HVAC, electrical, design and construction crews could or should be built at average BLS industry wages is absurd and a low road to poor construction.

University of Utah economics professor Peter Philips, who has studied the impact of prevailing wage laws for 20 years, has taken apart the WTA "research" using empirical data and superior knowledge of the industry. Rather than being 45 percent higher, he finds labor costs on prevailing wage projects to be comparable to similar private projects.

Taxpayer savings associated with the absence of a prevailing wage law? Zero. This is why the Wisconsin Legislative Fiscal Bureau concluded that "the evidence on prevailing wage effects generally range from relatively small effects to no statistically significant effects."

Yet while savings to taxpayers are not evident, the lost wages and benefits to workers are real. In nine states that repealed prevailing wage laws in the 1970s and 1980s, construction worker wages fell by an average of nearly $1,500 per year. The money was simply shifted from the pockets of workers into profits for owners and investors.

This article was originally published in the Madison Capital Times.