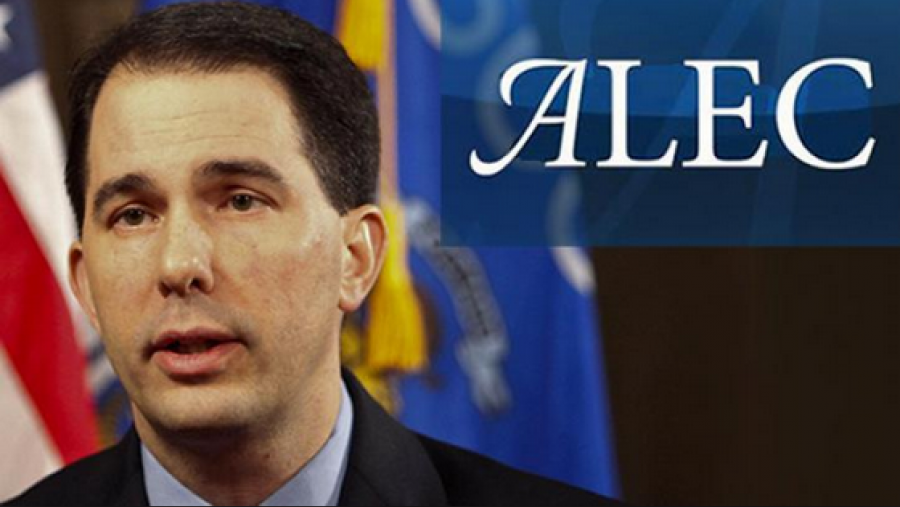 Wisconsin Republicans have called a special session to take up a "right to work" measure attacking private sector unions--and the text of the bill, the Center for Media and Democracy has discovered, is taken word-for-word from American Legislative Exchange Council (ALEC) model legislation.

See the side-by-side of the Wisconsin legislation and the ALEC bill here.

Senate Majority Leader Scott Fitzgerald, a former ALEC state chairman, says that the legislature has the votes to enact the measure, which undermines collective bargaining by allowing workers to opt-out of paying the costs of union representation. Right to work laws are associated with lower wages for both union and non-union workers.

Fitzgerald has long supported right to work, and in the past hasn't been shy about describing the ALEC connection. In December 2010, after Republicans took control of the legislature, he was asked by Jeff Mayers of WisPolitics about making Wisconsin a right to work state.

Fitzgerald replied: "I just attended an American Legislative Exchange Council meeting and I was surprised about how much momentum there was in and around that discussion, nothing like I have seen before." See the video here.

Governor Scott Walker, an ALEC alumni, was thrust onto the national stage in 2011 when he and the Republican-controlled legislature destroyed collective bargaining rights for public-sector unions, prompting massive protests and an unsuccessful recall election. With Walker's sights set on the GOP presidential nomination, he has recently called right to work for private sector unions a "distraction," but has stated that he will sign the bill.

Walker's support for right-to-work is no surprise.

Walker worked to promote many ALEC bills during his time as a state legislator (1993-2002) and first co-sponsored a right to work bill as a freshman legislator (SB 459). Just days after Walker was first sworn-in as governor in January 2011, he spoke frankly about his plans to "divide and conquer" Wisconsin unions in conversation with billionaire GOP financier Diane Hendricks for a documentary which only became public more than a year later. Hendricks gave Walker $500,000 for his 2012 recall effort, and gave $1 million to the Republican Party of Wisconsin in 2014.

Things start getting complicated when you realize that Right to Work is an entirely logical extension of our workfare policies. Where do we draw the line on who deserves fair wages, full labor rights, and representation/a voice? The line between our celebrated low wage workers, and our despised jobless poor, has always been spider's-web thin.Now we need some standard, some definition, of which low wage workers are worthy of fundamental rights and protections.