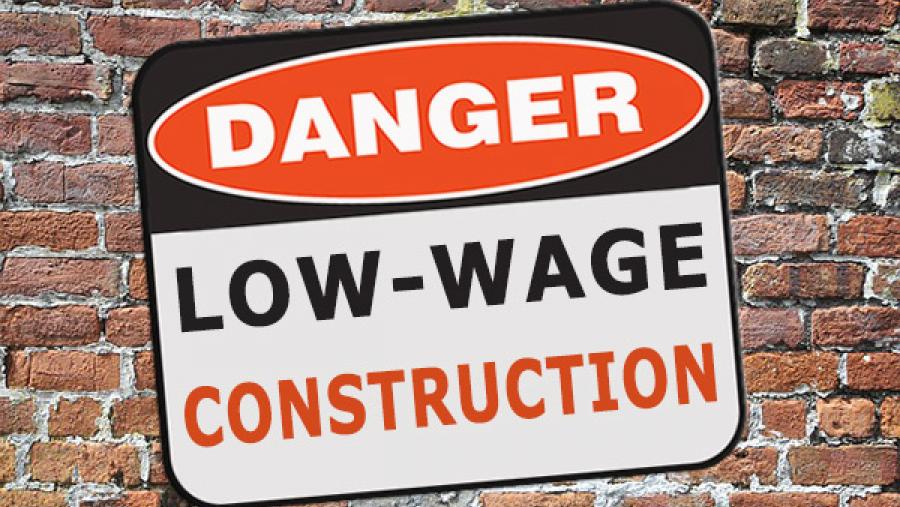 As unions and working people battle "right-to-work" legislation in several states, the American Legislative Exchange Council (ALEC) and allies have opened another flank in their war on good jobs. Targeted this time are state prevailing wage laws, which require public construction projects to support local wage standards instead of undercutting them. Studies have repeatedly found that prevailing wage laws do not harm taxpayers but are effective in providing something increasingly rare in regional labor markets, upward pressure on wages.

In addition to ALEC, prime movers behind prevailing wage repeal include:

The federal Davis Bacon Act, which requires that prevailing wages be paid on public construction contracts involving federal spending, was passed in 1931 to ensure that the government wasn't encouraging companies to drive Depression-Era wages even lower in order to win its business. Thirty-two states subsequently passed their own prevailing wage laws that apply to state-funded, and sometimes local- and school district-funded, projects.

Since many state contracting laws encourage or require public authorities to select the low bidder, prevailing wage laws are an essential backstop in preventing a public contracting "race to the bottom." Prevailing wage laws do not prevent non-union companies from bidding on public contracts or in any way favor unionized companies over non-union ones.

But, to the chagrin of some non-union contractors, they do prevent companies from winning public construction contracts merely on the basis of paying low wages. Prevailing wage repeal, according to Marquette University Law Professor Paul Secunda, "is just another way in the building industry to get cheap labor."

Lower Wages for Workers, No Savings to Taxpayers

In contrast, the "studies" promoted by prevailing wage repeal supporters ignore actual evidence and project only "estimated" savings based on unrealistic assumptions.

The Anderson Economic Group "study" currently being promoted by the Mackinac Center in Michigan and the MacIver Institute in Wisconsin in support of prevailing wage repeal presents no actual evidence from states with or without prevailing wage laws. Instead, it relies on earlier "studies" from Mackinac and the Beacon Hill Institute to simply assert that the Michigan prevailing wage law inflates labor costs by 25 percent, and then concludes that costs to Michigan taxpayers must be inflated by this amount. But they provide no evidence to support these claims.

The Midwest is Ground Zero for Assault on Wages

But the bulk of the action is in the Midwest:

Michigan: NFIB is explicitly "teaming up with the Associated Builders and Contractors (ABC)" to pursue prevailing wage repeal in Michigan. ALEC stalwarts Arlan Meekhoff, who is now Senate Majority Leader, Rep. Amanda Price and Rep. Aric Nesbitt are sponsoring prevailing wage repeal as a top Republican priority despite a threatened veto from Gov. Rick Snyder. Of course, Snyder is notorious for previously claiming to oppose RTW, only to sign a word-for-word ALEC version into law with virtually no public input but "astroturf" support from Americans for Prosperity.

Indiana: NFIB and AFP were also quick to praise Indiana HB 1019, sponsored by ALEC members House Speaker Brian Bosma and Rep. Jerry Torr, which would repeal the state's construction prevailing wage law by disbanding the wage boards that oversee it. The bill has passed the House and is now in committee in the Senate. But not, as one might expect, in the Labor Committee. Because Labor chair, Sen. Phil Boots, let it be known he was not a supporter, Republican Senate President Pro Tem David Long instead assigned the bill to the Tax Committee. Gov. Mike Pence has said he will sign the bill if it gets to him.

Missouri: Four different prevailing wage repeal bills are in play in Missouri, all with ALEC sponsors: Reps. Tony Duggar, Bill White and Bill Lant and Sen. Dan Brown. Bills to exempt school construction and certain housing construction projects have passed through committee and moved on to the full House.

Wisconsin: And the same forces that drove Act 10, Gov. Scott Walker's anti-collective bargaining bill, and RTW in Wisconsin are gearing up for more wage cutting via prevailing wage repeal. Hearings have yet to be scheduled on Assembly Bill 32 and Senate Bill 49, the latter sponsored by former ALEC "legislator of the year," Sen. Leah Vukmir. But the right-wing echo chamber -- op-ed from the bill's author, immediate support from allies including NFIB and AFP, partisan "research" from MacIver, appeals to "providing government with the tools to reduce costs" – is in high gear, so the push for the measure can't be far off.

According to Michigan State University Professor of Employment Relations, Peter Berg, a prevailing wage law "sends a signal that the state recognizes the social benefits of paying higher wages and ensuring productive, high-quality work in its projects. If the state repeals it, it's saying that this is just about wage costs on a project."

Says Berg, "It really makes you wonder what the state is trying to achieve."