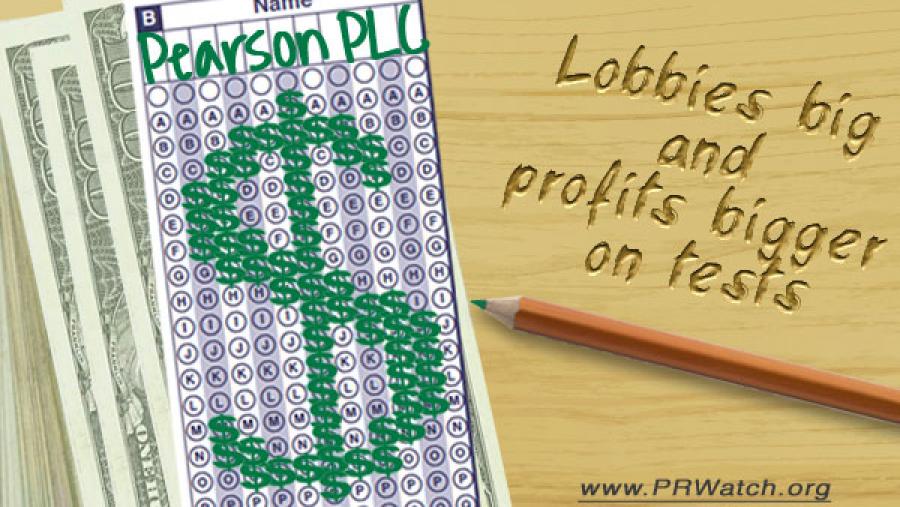 (Madison, WI)–School testing corporations have spent at least $20 million on lobbying along with wining and dining or even hiring policymakers in pursuit of big revenues from federal and state testing mandates under "No Child Left Behind" measures and the Common Core curriculum, according to a new analysis by the Center for Media and Democracy (CMD).

The expanded testing has fueled a testing boom worth nearly $2 billion annually, giving the main corporations getting the testing contracts a huge return on investment for their lobbying while generating a growing backlash from parents across the country.

With huge reported lobbying expenditures in addition to other ways in which school officials have been wined, dined, and pursued (which has been subsidized by American taxpayers), these companies have left no stone unturned in their efforts to create, expand, and exploit No Child Left Behind and the growing U.S. school testing market,” noted Jonas Persson for CMD, a non-profit that tracks corporate influence on public policy and that launched the award-winning ALECexposed.org investigation.

Lisa Graves, CMD's Executive Director added: "The practices of these testing companies require much greater scrutiny by federal and state government officials as well as the press, in light of the troubling concerns that have been raised, including what one company called 'streamlined social media listening,' meaning unregulated spying on American school kids."

Privacy? With big stakes for the corporations, student privacy interests are taking a back seat to securing lucrative contracts, leaving aside concerns that the fixation on tests is distorting what's taught and displacing programs that prepare students to unleash their potential in an array of fields and interests whether they test well or not.

Just this month, a New Jersey blogger revealed that Pearson, whose parent company is headquartered in London and which holds a $108 million contract in the state, had been spying on kids’ Tweets and social media posts to clamp down on those suspected of sharing questions online.

Three of the four main testing companies have so far refused to sign the Student Policy Pledge against commercial data mining and, as documented by CMD, Pearson and ETS have a track record of lobbying against privacy protection for kids.

Quick Summary of Findings. CMD’s quick guide to the profits, lobbying, and troubling track records of the four big testing corporations includes revealing details about the four testing companies that dominate the U.S. market, such as:

Download a copy of CMD's full report below or read it online on CMD's SourceWatch.