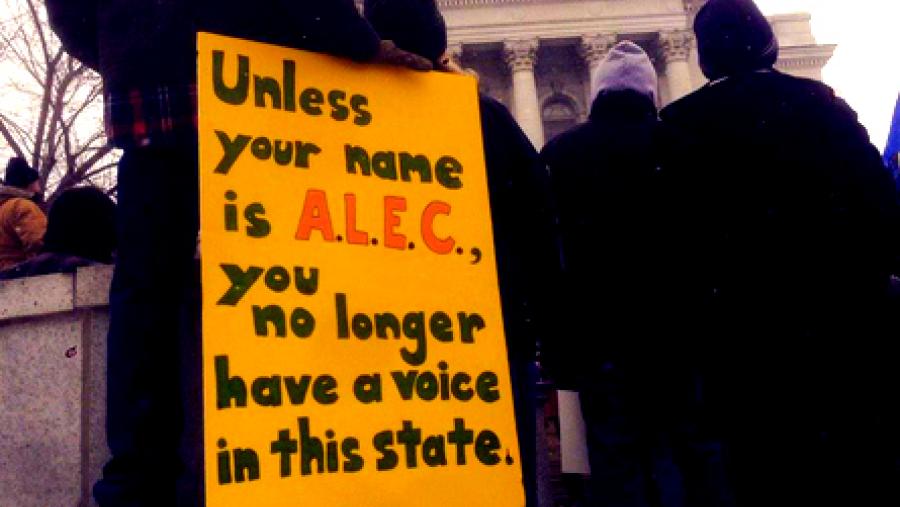 As the Wisconsin legislature gets ready to ram through a union-busting bill that will significantly impact the economy of the entire state, Wisconsin's newest member of the Senate asked perhaps the most pertinent question of her Republican colleagues: "what beating hearts are for this bill?"

The question was posed by Janet Bewley (D-Ashland) who was elected to the Wisconsin Senate in November 2014. She represents the far north where bitter winds and waves make spectacular ice caves that bring thousands to the frozen shores of Lake Superior.

Bewley noted that the bill, which harms unions by allowing workers to opt out of paying their fair share for union representation, was moving so fast that most of her constituents, who get their news from weekly newspapers that come on Thursday, would not even learn about it before the Senate vote.

While Democratic senators read letter after letter from workers and business leaders objecting to the measure that will lower wages and up-end critical training programs for builders and laborers, Brewley highlighted something the average observer might not notice: "I have not heard one person in the outer ring [of Republicans] speak of a single beating heart that is for this bill."

But that matters little to the array of special interests that have arrived in Wisconsin to provide "experts" and astroturf cover for the anti-worker measure.

Although the right-wing Daily Caller suggested this author was caught up in a conspiracy theory, from my vantage point just blocks from the Wisconsin Capitol, I can't help but take note of some striking facts.

Wisconsin is governed by the 43 ALEC members who make up the leadership and GOP majority of both houses. Governor Scott Walker is an ALEC alumnus who signed 19 ALEC bills into office in his first year as governor.

CMD and the New York Times pointed out that the bill was lifted word-for-word from the ALEC "model" voted on behind closed-doors decades ago by major American corporations like Koch Industries, Exxon Mobile, Peabody Coal and more.

And the ALEC drill team was on full display this week.

At Tuesday's public hearing, the only people to testify in favor of the bill were the corporations who would profit from lower wages in Wisconsin and an array of experts bankrolled by the Kochs.

James Sherk, an attorney for the D.C.-based Heritage Foundation, flew out to pile on. Sherk's effort to devise a local right-to-work (RTW) strategy and peddle it though the American Legislative Exchange Council (ALEC) was featured on the front page of the New York Times recently in an article entitled "Foes of Unions Try Their Luck at the County Level." The Heritage Foundation received $650,000 from a Koch family foundation in 2012 alone. Sherk was thrilled that right to work legislation would "drive down labor costs." Sen. Larson translated for the audience: "You say labor costs. You know, I would call that wages."

F. Vincent Vernuccio works for Michigan's Mackinac Center, one of the largest state-based think tanks in the nation, and part of the $84 million dollar State Policy Network, a sister organization to ALEC. The Mackinac Center received $1,494,000 from the Koch conduits DonorsTrust and Donors Capital Fund between 2010 and 2012.

Senator Chris Larson (D-Milwaukee), who attended the full-committee hearing on the bill, said "I did not see one person who was not paid to be there by a right-wing think tank. I was on the edge of my seat. I thought that any moment someone else might show up!" But alas the nine-hour hearing failed to produce citizens clamoring for the measure.

But the Wisconsin Policy Research Institute, an affiliate of the State Policy Network a national chain of "think tanks" for hire, was there to tout "new" research by ALEC "scholar" Richard Vedder who produced a study to show that the ALEC bill would raise incomes in the states, an argument characterized by Gordon Lafer, an Associate Professor at the University of Oregon as "either incompetent or intentionally misleading."

As CMD reported, Vedder's study focused not on wages but on total income, including stock market gains. In truth, as Lafer and other economists at EPI have documented, right-to-work laws are directly linked to lower wages, fewer benefits and more dangerous working conditions. The ever-helpful Vedder, who won an "Adam Smith Award" from ALEC, had written nearly identical RTW reports in Minnesota and Ohio,

On Wednesday, the Koch brothers' Americans for Prosperity group announced a major statewide ad buy to defend RTW. The ad peddles the lie that workers can be forced to join union and attempts to convince Wisconsin that the RTW is a homegrown idea.

"Wisconsin has always been a place of big ideas. Our next one? Right to Work," says the perky narrator. The ad omits the disclaimer: "AFP is a phony astroturf front group formed by the Koch brothers to hoodwink Americans into supporting their extreme agenda."

The Koch network, including AFP, has poured millions into Wisconsin to support Scott Walker and his extreme agenda. AFP spent at least $10 million defending Walker in the 2012 recall election sparked by Act 10, which denied collective-bargaining rights to public-sector workers.

Where Are the Victims of "Forced Unionization?"

In the face of this onslaught and certain loss, Democrats still managed to hit a few out of the park.

Senator Scott Fitzgerald (R-Jefferson County) opened debate with lofty rhetoric. The bill, he said, would prohibit "forced union membership" and usher in an era of "true workplace freedom." He later described it as "the most important jobs program to come before this body." It was lines like that, which prompted worker after worker to stand in the gallery and demand another hearing and a full and fair debate.

"People should have been given a chance to talk!" shouted a burly worker who had waited nine hours to testify, but was left out as the single hearing was cut short due to what was called a "credible threat" of a possible worker protest. "Right to work is un-American! You're supposed to work for the people not the Koch Brothers and ALEC!" shouted another.

One by one, these workers were hauled out by state troopers.

When the ruckus died down. Senator Jon Erpenbach (D-Middleton), one of the Wisconsin 14 who had left the state in 2011 to protest the union-busting Act 10 bill, stood to ask Fitzgerald another key question: "Can you give us one example, of a person anywhere in Wisconsin that was forced to be a member of a union?"

But the Senate leader was caught flatfooted. Fitzgerald responded to the chair: "Madame President, I won't answer that question. I think the focus should be on why we are here today."

Senator Julie Lassa (D-Stevens Point) raised another point: "If you are so proud of this right to work idea, why didn't you campaign on it?" Lassa noted that what the Governor had described as a "distraction" during his re-election a few months previously, quickly became priority one when Walker's budget terrible budget bill was being trashed by state newspapers.

Lassa pointed to testimony by Marquette Economics Professor Abdur Chowdhury estimating that RTW would lower wages in the long-run and could potentially cost Wisconsin $3-$4.5 billion in lost income.

"The idea that this will help Wisconsin's economy is a complete fantasy," said Lassa. She pointed to Forbes rankings, which put Minnesota in top 10 of state economies, but ranks Wisconsin at 32. "The facts are your policies are not working and we are falling further behind our neighbors."

The public policy statement reads in part: "It is the policy of the state to protect and promote each of these interests with due regard to the situation and to the rights of the others. Industrial peace, regular and adequate income for the employee, and uninterrupted production of goods and services are promotive of all of these interests." Additionally, "[f]or the purpose of such negotiation an employee has the right, if the employee desires, to associate with others in organizing and bargaining collectively through representatives of the employee's own choosing, without intimidation or coercion from any source."

While Risser characterized these edits as an important policy shift that deserved to be debated, much like the "drafting error" CMD exposed that proposed "truth" and the Wisconsin Idea be axed from Walker's budget, Fitzgerald characterized the language as "verbiage."

It was apparent that the GOP was not interested in debate of any form; they were simply running out the clock in a game that was rigged from the start. "They are evaporating the middle class and no one seems to care," said a frustrated Senator David Hansen (D-Green Bay). The bill passed 17-15 as the Senate leader said it would.

The debate starts in the state assembly today and there is sure to be more of the same.

To recap for our friends at the Daily Caller: Cookie cutter ALEC model bill? Check. "Expert" testimony from Koch supported staff? Check. Deliberately misleading copy-cat study from an ALEC scholar? Check. Lying TV ads from Team Koch? Check. And let's not forget the rave reviews from media outlets like Wisconsin Reporter bankrolled by Donors Trust, the preferred vehicle for the Koch Donors Network, and the phony "grassroots" website popped up by AFP operatives.

Those being cheated are the private-sector workers impacted by the bill and businessmen like Paul Christiansen, who is appalled that the legislature is involving itself in a private business contract. The owner of the 100-year old company H&H Industries, Christiansen told Senator Larson that he had voted Republican for most of his life "but in all my years in the business not one person came to me to say we want this done, no one even knows what it is." To fill the void, Assembly Republicans took the unusual step of popping up a new website on “workers freedom” so right-wing radio can drive virtual people to register in favor of the bill.

But there is one living, breathing Wisconsinite who will celebrate passage of the bill.

Diane Hendricks, the billionaire owner of the roofing firm ABC Supply Company, will be thrilled when Walker finally delivers on his promise caught on tape to "divide and conquer" the unions and make Wisconsin a red state.

Hendricks, a native Wisconsinite, appears to have moved up in the world. She has been attending Koch summits and appears to be part of the Koch Network of funders.

It never ceases to amaze me how progressives fall for the right-wing doublespeak and use it in their articles and headlines. "Right-to-Work" legislation has nothing to do with the right to work. It is about weakening workers rights to organize. Using the right-wing's Orwellian language cooperates in their misinformation. I'm sure they love it!
You forgot to state an alternative!