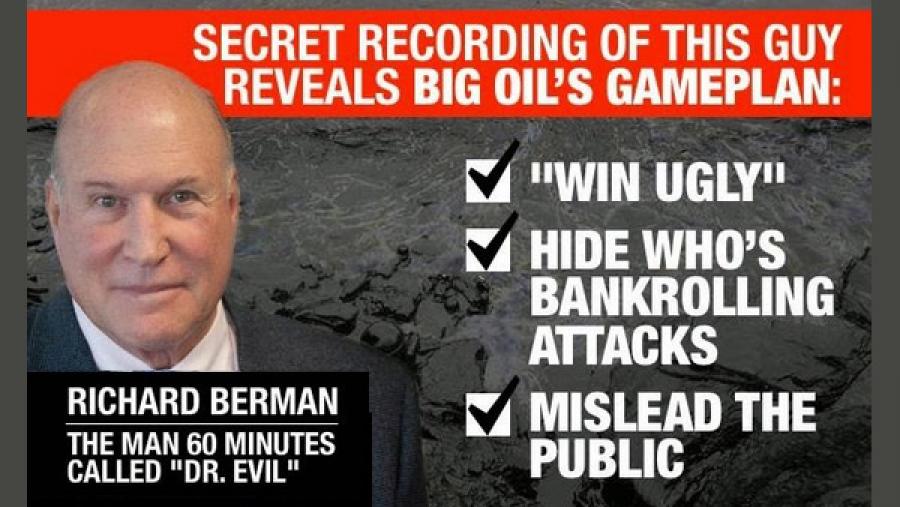 Dr. Evil is back. Richard Berman and his phony front group Environmental Policy Alliance (EPA, get it?) released a bizarre video "Breaking Up with Fossil Fuels is Hard to Do" criticizing climate activist and author Bill McKibben and a global day of action on fossil fuels planned for Valentine's Day.

350.org’s campaign to encourage universities and other public institutions to divest from fossil fuels is the fastest growing divestment campaign in history, reports the Guardian. On February 13-14, the group is planning a variety of vigils, sit-ins, calling on individuals and institutions "to close their accounts with banks and super funds investing in climate chaos.”

Nothing is sure to generate more buzz about the planned actions than Berman’s clunky attack ad, which features a young man, nuzzling an oil barrel dressed in high heels, urging kids to “fall in love with fossil fuels.” Although it is not known who specifically bankrolled the video, it was being promoted online by Independent Petroleum Association of America, the Institute for Energy Research, the American Energy Alliance, and the American Fuel and Petrochemical Manufacturers, ad groups and trade associations representing fossil fuel interests.

350.org quickly responded to the ad with a parody video of their own, which was apparently knocked off YouTube with a copyright claim.

In recent years, Berman has branched into the environmental arena with new front groups and websites including the BigGreenRadicals.com, EnvironmentalPolicyAlliance.org, EPAfacts.com, Greendecoys.com, Leedsexposed.com and more. In October 2014, the New York Times reported that Berman met with energy company executives at the posh Broadmoor Hotel in an attempt to raise $3 million to attack groups pushing for climate action, including Greenpeace and Sierra Club.

CMD published tapes on its website from the meeting where Berman told the executives to think of the fight against activists as "an endless war" and you have to "budget for it." He assured them that he would keep their identity a secret and detailed his tactics saying "you can either win ugly or lose pretty."

Berman's dirty tactics are attractive to fossil fuel firms because they know that climate change is accelerating and they have neither the American people nor science on their side.

350.org demands for climate divestment are rooted in science, including the recent reports from UN's Intergovernmental Panel on Climate Change (IPCC) and British scientists which found that two-thirds of the world's fossil fuels reserves must remain in the ground if governments were to meet the internationally agreed upon targets for reducing carbon pollution and preventing climate disaster.