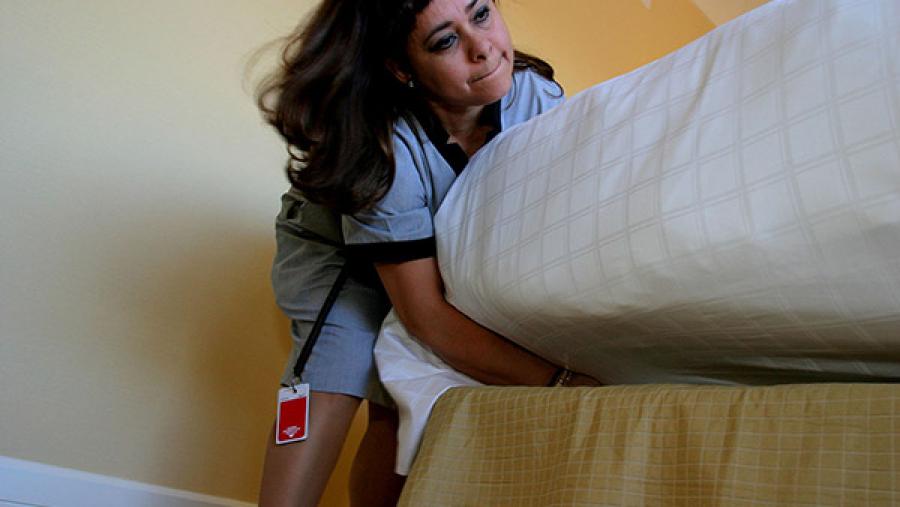 Two trade organizations affiliated with the American Legislative Exchange Council, the controversial corporate bill mill, filed suit on December 16 against the City of Los Angeles to block an ordinance passed last September to raise the wages for hotel employees. According to the ordinance, more than 40 percent of the city’s hotel workers currently make a living below the federal poverty line, but once it goes into effect, large non-unionized hotels will be required to pay their employees $15.37 an hour.

In what is one of the most expensive cities in the country, the state minimum, recently boosted from $8 to $9 an hour, has proven woefully inadequate to give people adequate housing and to keep people out of poverty. Even conservative real estate CEO Rick Carusi voiced his support for the measure, telling the LA Times that “It’s very difficult to live in this region … with that kind of money.”

Yet, the American Hotel & Lodging Association (which counts Marriott, Hyatt and Hilton as its members) and the Asian American Hotel Owners Association, argue in the lawsuit that the city has created an “insidious mechanism that improperly aids the Hotel Workers’ Union.”

The lawsuit is part of a nationwide no-holds-barred campaign against living wages by powerful trade organizations, involving litigation, front groups and state preemption.

In June 2014, the International Franchise Association (IFA) sued Seattle after activists fought for and won a minimum wage increase to $15 over three years. When the City Council of San Diego unanimously approved a minimum wage increase, and to provide workers with five days of paid leave a year, a group calling itself the San Diego Small Business Association sprung out from nowhere. It seemed that local business owners were concerned about the impact of the raise, but a look at the funding of the organization told another story. It turned out that the small business contributions were, “few and far in between,” as the San Diego Reader put it. Instead, the group was bankrolled by the DC-based American Hotel and Lodging Association, which contributed $100,000. A further $25,000 was provided courtesy of IFA. While the front group gathered enough signatures to postpone the hike and put the question on the 2016 ballot, it did so by alarmist claims and outright lies. More than one local petitioner was caught on tape saying that the petition was actually for a minimum wage hike.

In addition to lawsuits and fake grassroots, some corporate interests will be pushing an ALEC-inspired agenda to preempt minimum wage increases at the local level with a state law change. As CMD first reported, preempting minimum wage hikes was a key agenda item at ALEC's December 2014 meeting in Washington, DC and also reflected on the agenda of the American City County Exchange (ACCE), which seeks to extend ALEC’s influence from state capitols to city council chambers. When the fledgling organization recently arranged a “Local Minimum Wage” closed-door workshop, Brian Crawford from the American Hotel & Lodging Association was one of the lobbyists instructing local officials.

Stagnant wages is a major problem in the United States, negatively impacting overall economic performance. Polling shows that few Americans object to higher minimum wages. The same goes for small businesses; a 2014 study, for example, found that 61 percent of small business owners support a federal wage hike, believing it would benefit both their employees and the economy as a whole.

When canvasing support for wage crushing initiatives, asking people whether they support a living wage – or a higher minimum wage – simply will not cut it. Instead, the spin-doctors on the hotel lobby payroll cooked up a new sound bite, used for instance in San Francisco to fight the 2014 raise the wage campaign. The term appears to come from the hotel industry; in January 2014 when the AH&LA announced that it would “beat back the growing emergence of extreme minimum and living wage initiatives” nationwide.

It was a successful ruse; the word “extreme” would be repeated as a mantra by the hotel associations and their front groups clamping down on living wage initiatives city-by-city. As part of this strategy, the AH&LA also commissioned John W. O’Neill with the School of Hospitality Management at Penn State to conduct a “study” on the effects of “extreme wage initiatives” on the hotel industry. Not only did they fund the research, they also instructed the former hotel executive to use the word “extreme.”

"Extreme wage initiatives" were referenced no less than five times in a November 2014 Lodging Magazine interview with AH&LA president and CEO Katherine Lugar. In a September 2014 op-ed, Lugar warned of "local extreme wage battles in cities such as Seattle, Chicago and Los Angeles." A slide show from a recent hoteliers conference in Dallas, Texas, shows the map of “future threats” where the hoteliers are preparing for battle. These threats include proposals, currently on the table, to raise the wage in “various” California and New Mexico cities, plus Detroit, Louisville, Baltimore, Cleveland, Boston, Minneapolis and Portland, Maine. Defeating “extreme wage initiatives” is listed as the top priority for the industry.

With Arne Sorenson, CEO of Marriott making $9 million a year and Mark S. Hoplamazian CEO of Hyatt making $6 million a year, we hope the Orwellian phrase is one the hoteliers will continue to embrace.