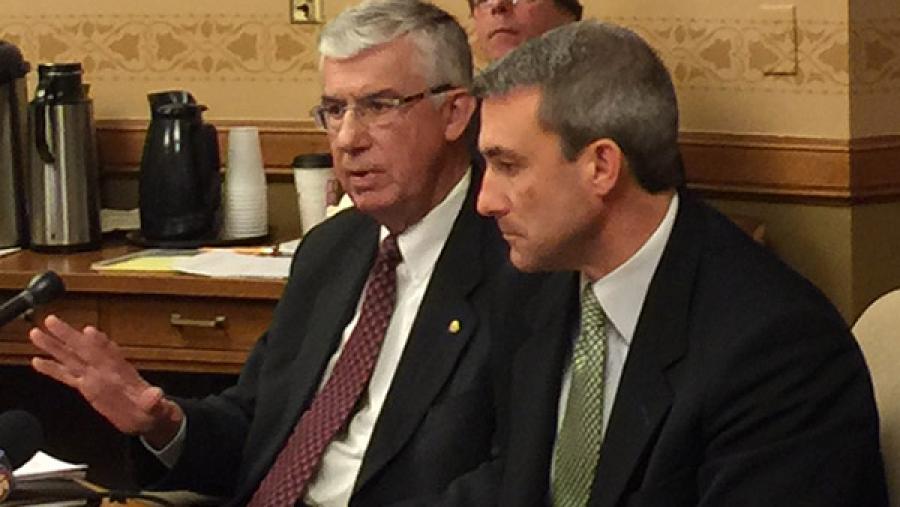 As the Assembly Judiciary Committee hearing got underway yesterday, several TV crews, including the local FOX affiliate, were in attendance.

What garnered all the news interest? The Committee’s discussion on a bill making it a Class I felony to surreptitiously film under someone’s skirt. Rep. Larson (R-Colfax) assured the women of Wisconsin that the bill also makes it illegal to fly drones under skirts.

But when it came time discuss another form of “defrocking” – albeit a less lurid one – the TV crews wrapped up and left. Assembly Joint Resolution 1 is a proposed constitutional amendment that would change the way the Chief Justice in the Wisconsin Supreme Court is appointed. Under Wisconsin's Constitution the title is given to the longest serving member, but under the GOP's proposed new system it would be decided by a vote among the justices every two years.

Presented to the Committee by Rob Hutton (R-Brookfield) with lofty words about fairness and democracy, the amendment is, in fact, part of a coordinated GOP attack on current Chief Justice Shirley Abrahamson. Also in the works is a bill by Rep. Dean Knudson (R-Hudson) that would force Abrahamson into retirement, overturning the will of the voters who put her into office.

The two-pronged attack on a sitting justice who was duly elected to a 10-year term by the voters in 2009 is unprecedented in Wisconsin history. Never before has the GOP sought to cancel an election or amend the constitution to undermine the authority of one woman.

The reason, as CMD’s Mary Bottari put it in a recent PR Watch article, is that the court has now been handed three cases challenging the “John Doe” criminal investigation of potential illegal campaign coordination between the campaign of Wisconsin Governor Scott Walker and “independent” expenditure groups like Wisconsin Club for Growth. Abrahamson is a brilliant jurist and leader of the liberal wing of the court. If there is one person the GOP does not want perusing the sealed John Doe files, it is her.

After beating the bushes, the GOP could only find one former judge to testify in favor of this partisan attack on the independence of the judiciary. Their choice? None other than former State Supreme Court Justice Jon Wilcox, whose campaign was fined $10,000 fine for illegal campaign coordination in 1997; his campaign manager Mark Block was fined $15,000 and barred from politics for three years. This case is the leading precedent establishing that the type of coordination alleged in the John Doe is barred.

Justice Wilcox assured the Judiciary Committee that “it’s not a partisan issue … this isn’t based on one person.”

But many members of the committee weren’t buying it. There were serious concerns from Dana Wachs (D-Eau Claire) that the Legislature was strong-arming the judiciary and interfering with the system of checks and balances. What about Abrahamson’s due process rights?

But the most trenchant critique came from Rep. Gary Hebl (D-Sun Prairie): “This is not a vendetta against the Current Chief, is that true?” After Wilcox assured the committee that it was not, Hebl pounced again: “This is not the attitude that’s been expressed by many. But to make absolutely clear that it’s not political, would you then agree to an amendment that won’t go into effect until the end of the current Chief’s tenure?”

A visibly flustered Wilcox tried to skirt the question. In the end, he had to explain that he saw no problems with it. At least not on principle. But the constitutional amendment under consideration would strip Chief Justice Abrahamson of her title within a few weeks if placed on the April 7 ballot and ratified by the voters as planned.

It has been said that free speech and public debate are the lifeblood of democracy, but the hearing notice was sent out less than 48 hours before the meeting took place, and it so happened that it took place while the Supreme Court was in session. Few members of the public were aware that the majority party had plans to change the constitution to target one of the most respected and renowned Chief Justices in U.S. history.

“This is totally inappropriate. The chair should arrange another public hearing, and give at least one week’s notice. We need to give our citizens time,” Rep. Hebl complained to deaf ears.

As the hearing broke up, the sounds of the Solidarity Singers echoed through the cavernous Capitol building. It marked the 1,000th Sing Along in protest of the extreme Walker agenda; perhaps the singers will soon be joined by a public that takes notice that the Wisconsin GOP is now intent on using the Wisconsin Constitution as a weapon against the Chief Justice – upending Wisconsin’s founding principles of an independent judiciary at a time when a check on the absolute power of the majority is needed the most.