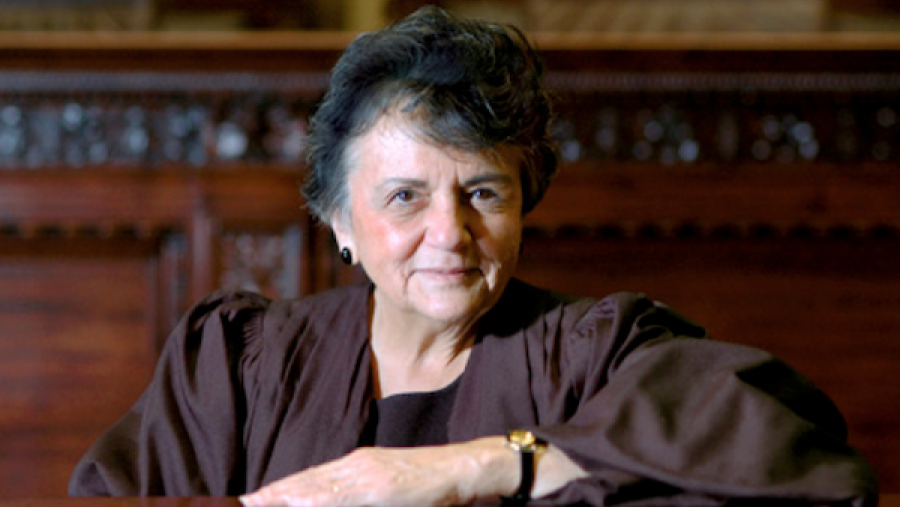 For almost 40 years, Wisconsin's judges have been working without a mandatory retirement age. But all of a sudden, some state GOP leaders have decided that this is a major problem.

As the Wisconsin Supreme Court prepares to take up multiple cases involving the “John Doe” criminal investigation of potentially illegal campaign coordination between Governor Scott Walker and the "independent" issue ad groups that have bankrolled the Republican party, Rep. Dean Knudson (R-Hudson) has decided that the time has finally come to put senior judges out to pasture, saying that he plans to introduce a bill in early January.

"75 is the age that I would set, however, there are 132 legislators here. There may be some that would prefer to set that at 77. I wouldn't be surprised if there's discussion about 78 or 80," Knudson told Madison's WKOW TV.

The focus on the precise age limit has some in the media granting the issue a bizarre legitimacy. Multiple articles have been penned discussing what age limit might impact which judges.

But everyone in the State Capitol knows what is really going on. This solution in search of a problem is targeting one judge only: Wisconsin Supreme Court Chief Justice Shirley Abrahamson, one of the most prolific and respected jurists in the United States and the leader of the liberal wing of the court.

With GOP in charge of the Assembly, the Senate and the Governor’s mansion, Abrahamson is one of the few elected officials remaining with some ability to impede the extreme agenda.

“Let’s be frank,” says attorney and State Representative Chris Taylor (D-Madison). “This is all about consolidating political power and silencing dissent.”

Savvy Chief Justice a Thorn in the Side of Extremists

In 1977, the state passed a constitutional amendment to allow the legislature to set an age limit for judges, but no legislature felt the need to take the measure up and times have changed. Across the nation, not only are average Americans working longer, but the nation's jurists are penning some of their most notable decisions late in life. Today on the U.S. Supreme Court, Justices Scalia, Kennedy, Ginsburg and Breyer are all over 75.

Wisconsin Supreme Court justices are currently elected to ten-year terms, meaning that voters already periodically have a chance to consider whether justices' ages -- not to mention their professional training and experience -- are up to the demands of the job.

Abrahamson, who was born in 1933, was appointed to the state Supreme Court in 1976 by Governor Patrick Lucey and has been re-elected three times since then -- including in 2009, when she was 75.

Today, she is 81 and as sharp as a tack. In recent years, as right-wing justices have taken the majority, she has authored a series of important dissents.

On Wisconsin's voter ID law, Abrahamson wrote that: “Today the court follows not James Madison — for whom Wisconsin’s capital city is named — but rather Jim Crow, the name typically used to refer to repressive laws used to restrict rights, including the right to vote of African-Americans."

On a challenge to the passage of Walker's Act 10, which overturned Wisconsin's 50 year tradition of good faith bargaining with public sector workers, she chided the majority for giving in to political pressure, writing that: "Trust and confidence in the integrity of the judicial branch as an institution is critical at all times but especially when a case has high public visibility, is mired in partisan politics, and is emotionally charged . . . There is no liberty if the power of judging be not separated from the legislative and executive powers."

On December 16, the Court announced that it will hear three cases challenging the ongoing John Doe investigation of dark money groups like Wisconsin Club for Growth, which CMD was the first to reveal funneled millions of dollars to multiple groups during the 2011-2012 recall campaigns sparked by Walker's attack on worker rights. With Justice Bradley having recused herself, Justices Abrahamson and Crooks will be the only two justices hearing the case whose own election campaigns did not receive substantial support from groups implicated in the investigation.

Abrahamson’s awards and accolades are legion. She is a past president of the National Conference of Chief Justices and chair of the board of directors of the National Center for State Courts. She received the first Dwight D. Opperman Award for Judicial Excellence, a prestigious award granted only once a year to the nation’s best jurists.

Knudson hasn’t pointed to any particular problems caused by older judges and he told the press that his proposed legislation "really isn't about any individual." But no one is buying it.

“There is no doubt in my mind that this proposal is a partisan attempt to limit the tenure of Wisconsin’s most honored and recognized justice who is known not just for her intellect, but her unparalleled work product,” says former Wisconsin Attorney General Peg Lautenschlager. “I have been told that she has penned more decisions and dissents than any justice in the United States and I don’t doubt it. To pretend that she is not up to the task is ludicrous.”

"She is a trailblazer and a national treasure," says Nan Aron, President of the Alliance for Justice. "She was the first woman to get tenure at the University of Wisconsin law school, the first woman to sit on the Wisconsin Supreme Court, and has been a nationally recognized leader in upholding access to justice for all, not just the wealthy and the powerful."

Knudson, a veterinarian from North Dakota, is a member of the American Legislative Exchange Council (ALEC), a recipient of Koch Industries PAC money and a reliable water boy for the Republican leadership. In the critical 2011-2012 legislative session when some 19 ALEC bills become law, Knudson voted in lockstep with the Governor on the ALEC agenda 100 percent of the time. He even supported Walker's omnibus tort bill, which combined several ALEC "models" to make it harder for Wisconsin families to hold corporations accountable for products that injure or kill their parent, spouse, or child. He speaks often to the press about the need to "reform" the nonpartisan Government Accountability Board, constructed by a bipartisan group of legislators after Wisconsin's last campaign finance scandal, which led to the conviction of Senate and Assembly leaders a decade ago.

If the Wisconsin GOP wants to convince people that this was a considered measure above partisan politics, they will allow Abrahamson and other judges whose tenure might be terminated by the bill to serve out their term as other states have done.

"It would subvert the will of the people if the legislature stepped in and attempted to bar judges from serving beyond an arbitrarily-determined age that is not based on fitness, capacity, or any other objective criteria. In the case of the Chief Justice, the people knew how old she was when they last re-elected her and deemed her fit for another term," said Susan Crawford of Cullen Weston Pines and Bach LLP, a firm that frequently appears before the Supreme Court.

"The real question is whether the legislative proposals can retroactively nullify the popular vote of the people who elected a chief justice and justices for 10-year terms. To suggest that the Legislature can or should adopt either measure appears to elevate politics over law,” said Wisconsin Justice Ann Walsh Bradley in a statement.

Another proposal making the rounds this week also targets the Chief Justice. State Senator Tom Tiffany (R-Hazelhurst) is circulating a constitutional amendment to end the seniority system that determines who is the head of the court. Tiffany, best known for paving the way for a massive mine desired by the out-of-state mining firm Gogebec Taconite (which was revealed to have secretly funneled $700,000 to Wisconsin Club for Growth in the John Doe investigation), wants the leader of the court to be chosen by vote of the majority.

While the GOP ponders its best avenue of attack, Abrahamson just keeps on working, most recently asking important questions about how the Court can be expected to resolve the wide-ranging set of state and federal issues presented by the dark money groups at the center of the closed-door John Doe probe without a full, factual record and with many of the key documents under seal and inaccessible to the public or even certain litigants in the case.

"The public should, to the extent possible, be given access to documents that are the bases of the cases, as well as to the briefs (and appendices) filed in this court, to the oral arguments, and to the opinion(s) of this court. The court's order does not give adequate consideration to the public nature of the parties' arguments and the opinion(s) of this court. These issues may be down the road a piece, but now is the time to think about the road we are constructing and where it will ultimately lead," she wrote.

Precisely the transparency and thoughtful scrutiny the parties to the case and their allies in the political arena are seeking to avoid.

-- You can find CMD's reporting on the John Doe dark money probe here.

Mary, you're rght this does target Shirley but... while she has, as you say penned some biting dissents, her actual influence on final decisons in the big cases like Act 10 and Voter ID has been miinimal since the conservative majority has been in charge. I am not sure the age limit in the long run will have a big impact in the future and it is of course possible the final bill will include a grandmothering clause that exempts Shirley. I think the other high court reforms that are being contemplated are more significant . It's almost guaranteed that the constitutional amendment that requires the court to elect it's own chief for a two year term will be on the ballot along with Anne Walsh Bradley and her opponent James Daley. And it's possible a bill the State Bar is drafting to limit justices to one 16 year term will be considered this year. That one is aimed at limiting the impact of money in judical races by insuring that justices aren't looking ahead to their reelection when they rule on cases. The Bar designers of the proposal say it will help justices remain justices instead of having to be politicians to stay on the bench. I think the age limit in the future will affect conservative and liberal judges equally. I don't think conservatives are any less likely to live to 90 and beyond than liberals are. And there are plenty of young lawyers and judges on both sides of the ideological divide who can run for a 16 year tern and have an impact on shaping the laws of the state. My two cents
I believe it is more likely that heavily financed candidates will leave the bench sooner to take on some high-paying job in the private sector. Corporate influence will buy off seemingly ineffectual people to replace them with, apparently, better models. My two cents
There is no doubt in my mind that the proposal for an age limit for members of the WI Supreme Court is political and age discrimination. The current state authoritarian administration is damaging our state democracy, such as its educational systems from preschool through university. With controlling laws and limited funds deterioration is inevitable. Wisconsin is definitely behind Minnesota, which has a far better governor and working government. We used to be proud of Wisconsin rankings, but they have deteriorated. Considerations for all Wisconsin citizens is no longer a priority, just verbage. Corporations used to support improvements. Now they write some of the laws that benefit themelves. What a shame. If this was a nightmare, we could wake up.