A review of 2011-2012 voting records by a University of Wisconsin academic demonstrates that many Wisconsin legislators are marching in lockstep with the American Legislative Exchange Council (ALEC). Sixty-one Wisconsin politicians -- or 46 percent of the legislature -- voted with the ALEC agenda one hundred percent of the time.

Since 1969, Jay Stampen, Emeritus Professor of Educational Leadership and Policy Analysis at University of Wisconsin-Madison, has tracked legislative voting behavior in the Wisconsin Senate and Assembly. One of his data sets goes back more than 100 years to when Governor Robert M. LaFollette ran the state.

In recent years, Stampen has observed a profound erosion in the role of average citizens in policymaking as legislators vote increasingly with special interests like ALEC.

"Based on a review of a hundred years of voting," Stampen tells CMD, "today there is now much less citizen voice in the legislature and policymaking."

Stampen's 2011-2012 data set (available below) includes 17 Assembly votes and 15 Senate votes on Wisconsin bills reflecting ALEC cookie-cutter legislation. This included Governor Walker's anti-union Act 10 legislation, parts of which reflected ALEC models like the "Public Employee Freedom Act," plus voter ID restrictions, and a version of the "Stand Your Ground" law with similar provisions to the one that helped Trayvon Martin's killer evade charges in Florida. According to Stampen's findings:

A complete list of ALEC members is not available, but CMD documented the ALEC membership of 41 legislators in the 2011-2012 session. According to internal ALEC documents published by The Guardian, at least 43 Wisconsin politicians -- or one-third of the legislature -- are members of the group as of 2013.

On the opposite side of the aisle, Democrats were not united in opposition to the ALEC agenda. Some voted to limit the use of vehicle fees and taxes for highway purposes only; others, largely from rural districts, supported ALEC gun bills. Because they were not members of ALEC, it is unlikely that Democrats were aware they were voting on ALEC bills.

In the current session, the Wisconsin GOP is again reading from the ALEC playbook.

Kapenga is also the author of Assembly Joint Resolution 81, calling for an Article V Constitutional Convention to force a federal balanced budget amendment. Such an amendment would likely result in steep cuts to many popular programs such as Social Security and cripple the government's ability to respond to natural disasters.

The ALEC "Super-Majority Act," which allow a minority of legislators to thwart a majority vote to raise taxes, passed as a statute last session but is now being proposed as a constitutional amendment. In other states, super-majority requirements have not led to lower taxes, but they do make it harder to enact tax reform.

"Legislators would not be able to decrease the rate of one tax and make up the lost revenue by increasing the rate of a different tax, unless the change was approved by a two-thirds majority in both houses or by a statewide referendum," the Wisconsin Budget Project writes. As a statute, the super-majority requirement could be changed by a majority vote, but a Constitutional amendment would bind the hands of future legislatures. As the Wisconsin Budget Project notes, "In other words, the current law creates a political barrier to voting for tax rate increases, without placing a straitjacket on future lawmakers as a constitutional amendment would."

The ALEC "Special Needs Scholarship Program Act" -- which would give students with special needs a taxpayer funded "voucher" to attend for-profit, private, or religious schools -- failed to pass in 2012, after then-Rep. Mark Pocan called out the bill's ALEC ties on the Assembly floor. Now the bill is back. Notably, the operators of a Milwaukee private school that closed abruptly in January after receiving $2 million from taxpayer-funded vouchers are now operating a school in Florida, where they are funded by that state's ALEC-inspired special needs scholarship program.

As in previous years, some ALEC measures garnered bipartisan support. One recent bill reforming the probation system, AB 702, passed unanimously. The legislation was based off of a Hawaii program that started in 2004, and has been promoted by groups like the National Conference of State Legislatures and Pew Charitable Trusts; ALEC also adopted the bill as a "model" in 2010. Upon its passage, Rep. John Nygren, the ALEC State Chair for Wisconsin, revealed that AB 702 was an ALEC model, and jokingly welcomed the members of the State Assembly to the "vast right wing conspiracy."

"Legislators Are Serving ALEC More than the People of the State"

Stampen first started tracking voting behavior in the Wisconsin legislature in 1969, as part of his PhD dissertation. "In retrospect, that was a relative golden age," he says. Legislators frequently crossed party lines to get things done for their constituents and the people of the state. Stampen documents at least five cross-party voting alliances from the late sixties and early seventies that were built on shared interests like agriculture or rural issues. "It was a bottom-up system, with more citizen voice as a result," Stampen tells CMD.

After decades in academia, Stampen retired in 2003 and again began replicating his dissertation research, and has been struck by the recent rise in block voting along party lines, and the increasing power of special interests like ALEC and the state chapter of the U.S. Chamber, Wisconsin Manufacturers and Commerce.

"The implication is that legislators are serving ALEC more than the people of the state," he says of his recent findings. "The people aren't the source of the ideas that are going into the state. It is super lobbyists like ALEC."

The vote tables below highlight votes on 17 bills in Wisconsin's 2011-2012 legislative session that included provisions reflecting ALEC model legislation. The omnibus "tort reform" measure reflected seven pieces of ALEC model legislation -- but because legislators only voted on the bill once, it was only counted once. The 2012-2013 budget bill also included multiple ALEC priorities, but was excluded from the count since it is difficult to isolate a legislator's support for a specific provision within it. CMD's previously reported on the 2011-2012 legislative session in a report called "ALEC Exposed in Wisconsin: the Hijacking of a State." 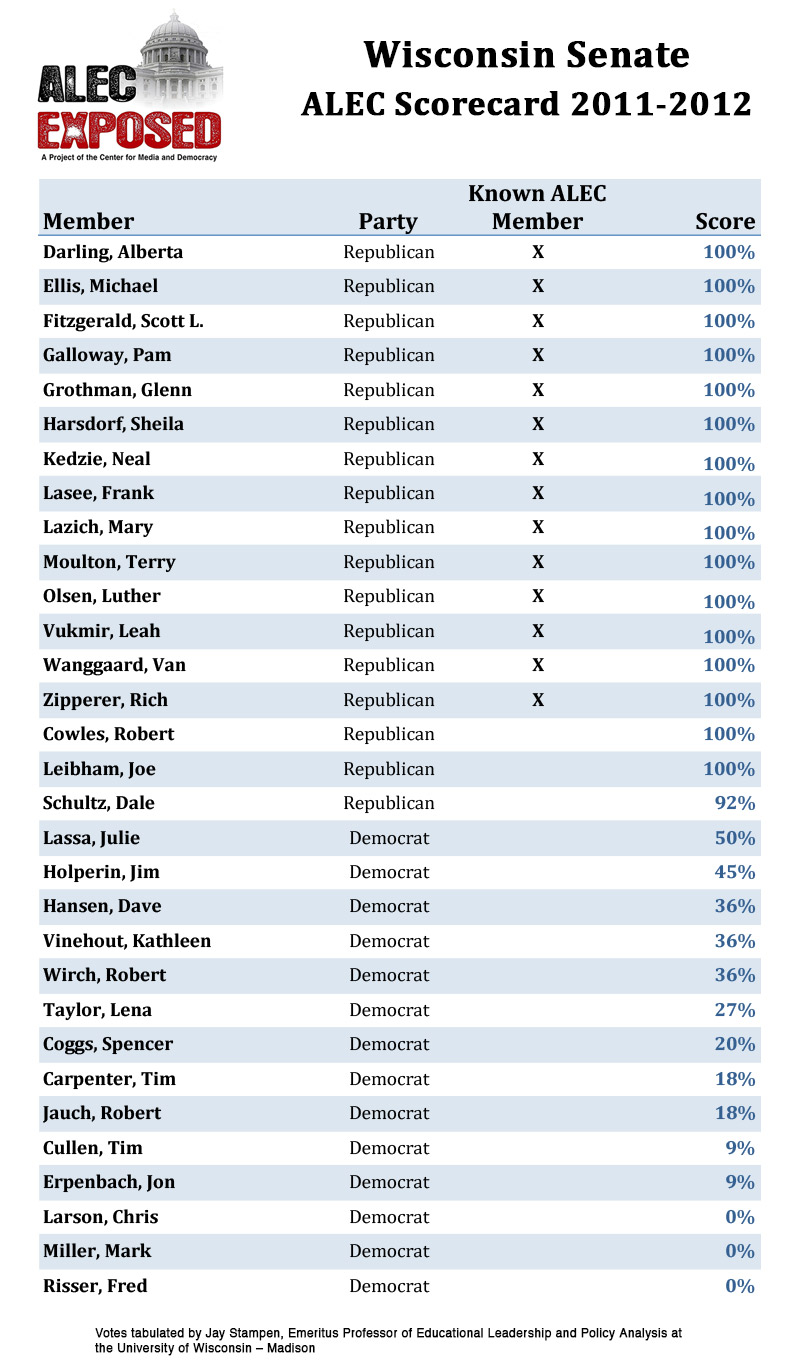