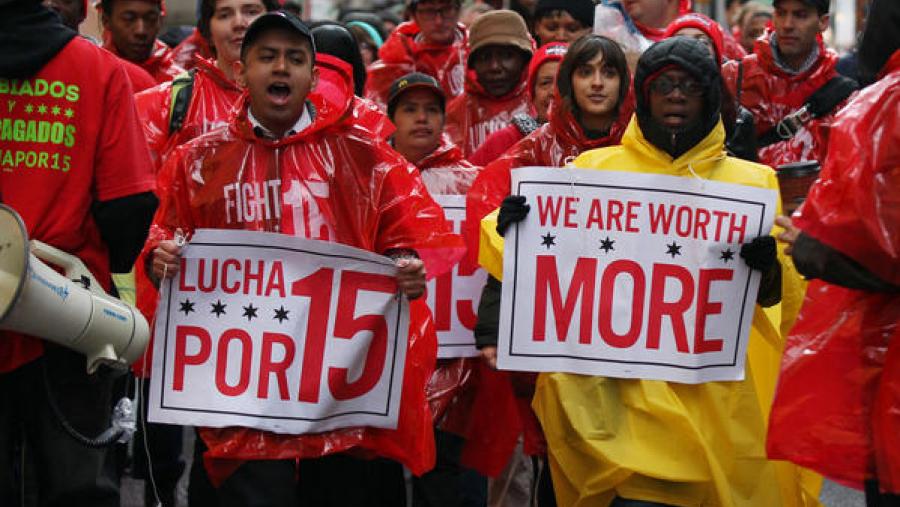 Democratic state legislators in Illinois are mulling an effort to thwart Chicago's effort to raise its minimum wage, even as they raise the state wage above the national average. And the state National Restaurant Association affiliate is eating it up.

Efforts to "preempt" local governments from enacting a higher minimum wage is most closely associated with the American Legislative Exchange Council (ALEC), which counts the National Restaurant Association among its members and has long pushed bills like the “Living Wage Preemption Act." At ALEC's meeting next month in Washington D.C., "Minimum Wage Preemption Policies" will be at the top of the agenda.

The Illinois preemption measure comes amidst an effort by legislative Democrats to raise the wage in the lame duck session.

On election day, Illinois voters overwhelmingly supported an advisory referendum calling for the legislature to raise the state's minimum wage to $10.65 per hour -- even as voters also elected a new governor, Republican Bruce Rauner, who has called for lowering or eliminating the minimum wage altogether. The GOP governor-elect said he would only sign a minimum wage bill if the legislature agreed to corporate-friendly measures like tort reform and overhauling the workers compensation program.

House Speaker Michael Madigan and Senate President John Cullerton, both Democrats, signaled they would push for passage of the minimum wage increase that voters demanded before Rauner took office in January -- yet also said they are gauging support for a preemption measure that would block cities from enacting their own higher wage.

This would shut down an effort in Chicago to raise the minimum wage to between $13 and $15 per hour. Chicago has been the site of some of the biggest "Fight for $15" fast food protests in the country, with over 50 people arrested during the most recent protests in September.

In July, Chicago Mayor Rahm Emanuel endorsed raising the city's minimum wage to $13 per hour, following recommendations from a Minimum Wage Working Group that he convened. The task force urged the City Council to hold off on raising the wage until after the November elections, purportedly to avoid deterring the legislature from enacting a statewide law.

That delay could backfire for Chicago workers, if the legislature preempts the city's effort to enact a higher wage.

One group that is likely celebrating the preemption proposal is the Illinois Restaurant Association, the state chapter of the powerful National Restaurant Association (sometimes referred to as "the Other NRA"). NRA affiliates around the country have been key in thwarting minimum wage and paid sick day efforts through preemption measures, as the Center for Media and Democracy has documented.

After the mayor's office backed the $13 wage for Chicago in July, Illinois Restaurant Association president Sam Toia declared that the wage should be set at the state level, rather than in cities.

“The IRA supports a reasonable increase to the minimum wage that is considered at the state level versus a piecemeal approach that is proposed by each municipality,” Toia told the Chicago Tribune in July.

House Speaker Madigan -- who is pushing the preemption idea -- held a fundraiser with the Illinois Restaurant Association last month, with tickets ranging from $500 to $10,000.

Crain's Chicago Business pointed out at the time that, "Among issues Mr. Madigan's House may take up as soon as November is whether to increase the state's minimum wage — something that would go straight to the bottom line of many eateries."

If Madigan's preemption measure is successful, local elected officials in cities across Illinois would be blocked from making their own decision about a higher minimum wage for residents.

Mendacity on the menu
I cannot believe the democrats are stooping to GOP tactics!! Whoever these clowns are, they need a come to calling and in a very large way!! I am going to look these egregious "people" up and give them a what's what!! Please all do the same. It only takes a few minutes and is much more powerful than you can imagine!!